The Israeli right's hypocrisy on Jerusalem

Despite past promises by Prime Minister Benjamin Netanyahu to former coalition partners, the issue of Jerusalem is on the discussion table with the Palestinians. 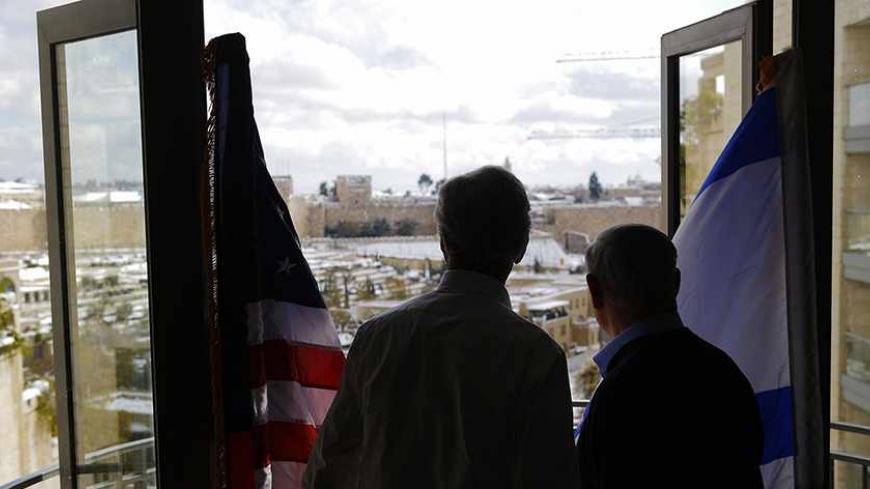 US Secretary of State John Kerry (L) and Israeli Prime Minister Benjamin Netanyahu look out onto the snow covered city of Jerusalem, during a meeting, Dec. 13, 2013. - REUTERS/Brian Snyder

While US Secretary of State John Kerry continues the efforts to promote the negotiations between Israel and the Palestinians, something is going on in the West Bank. Something bad. On the Palestinian side, acts of violence have become ever more frequent. It is no organized intifada. Yet, there has been a noticeable escalation in violent events of a certain type, labeled by the Shin Bet as “terror attacks set off by the mood in the Palestinian street” with no guiding hand behind. In fact, there has been a steep rise in Molotov cocktail-throwing and rock-hurling incidents, riots and random terror attacks by individual terrorists.

On the Israeli side, the Israel Defense Forces (IDF) and the Shin Bet have stepped up their operations and incursions into the Palestinian Authority areas — typically, for the purpose of arresting wanted persons. Some of these incursions, such as the one on Dec. 18, deteriorate into a local flare-up — violence that leads to deaths and injuries. Two Palestinians were killed the week of Dec. 15 in an incident of this kind involving SWAT fighters and Israeli paratroopers.

The question is, who is going to win the race evolving before our eyes? Will it be Kerry, who seeks to extend the nine-month period allotted for the negotiations by another nine or so months, or rather the bubbling area, which is liable to escalate at any given moment from a local event into a larger-scale conflagration – one that could lead to further escalation, which would result in the break-up of the negotiations and drag the region into another cycle of violence?

On the Palestinian side, they point an accusing finger at the Israeli defense establishment, charging that it is deliberately seeking to step up its activity in the territories with the aim of igniting the area, setting off a controlled explosion and thus, disposing of the negotiations and of Kerry’s dangerous energies. Palestinian sources say that Israeli Minister of Defense Moshe Ya'alon is opposed to the security plan proposed by the Americans on the grounds that it is too risky, and claim that he will do anything to sabotage the whole move. Sources close to Ya'alon reject the allegations. The activity carried on in the territories by the IDF and the Shin Bet is indispensable and has no viable alternative, the defense minister’s close associates argue; there has been no increase in our operations and no attempt to bring about an explosion. Israel is interested in maintaining calm in the area, period.

Israeli security officials operating in the area who are familiar with what is going on in the West Bank have recently told Al-Monitor the following: While the Palestinian Authority is not itself engaged in terrorism and, in fact, opposes terrorism, the Palestinian activity with respect to the actual struggle against terrorism is superficial, unsatisfactory and inadequate. Israel detains each year around 1,800 wanted Palestinians, whereas the Palestinians arrest some 30 to 40 suspects, and set them free after a short time. The Palestinian security forces lack real determination.

As to the prevention of terrorist attacks, Israel can claim to its credit about two-thirds of the successful counterterrorism operations in the territories, while the Palestinians contribute the remaining, less effective, third. Even when they do arrest someone, they fail to follow through with the preventive process; there is no real investigation, and no further arrests are made on the basis of the information received in the investigation; there is no confiscation of weapons, and no lawsuits are brought against suspects. They show no determination to go ahead and complete the task. It is as if the Palestinians were just seeking “to be done with it and get off cheaply.” They would rather not go out of the way to help Israel. They do the minimum they possibly can.

Under the current state of affairs, it is said in Israel, we Israelis have no choice but to consistently pursue the “lawn mower” method. That is, not to let the terror cells grow and proliferate — not to take any risks. Any suspicious move on the part of a terror activist is met with prompt response and an immediate arrest. This is, and has always been, the Israeli policy in the territories. It has never been modified, and as matters now stand, when Hamas is making a tremendous effort to breathe life into its devastated infrastructures in Judea and Samaria, we have no choice but to carry on our daily activities in the territories.

Meanwhile, on the Israeli political front, there is much commotion. Here’s a story aptly illustrating it: In October 2008 then-Israeli Minister of Foreign Affairs Tzipi Livni sought to form a new government in Israel. Former Prime Minister Ehud Olmert had just then resigned from office over the investigations conducted against him, and Livni, who took his place at the helm of the Kadima Party, received a mandate to set up a government. In the course of the negotiations she held with the ultra-Orthodox parties, she was requested to assure them far-reaching financial benefits, and to sign a document to the effect that she would never agree to put Jerusalem on the negotiating table. An understanding was eventually reached regarding the financial issue. However, Livni refused to commit herself on the matter of Jerusalem. Her political future was at stake, yet she persisted in her refusal.

At the same time, then-opposition chairman Benjamin Netanyahu was leading a lobbying campaign by phone vis-a-vis the ultra-Orthodox, and promised them that with him at the helm, no negotiations would ever be held over Jerusalem, under no circumstances whatsoever.

And while Livni’s delegates to the coalition negotiations were trying to plead with ultra-Orthodox Yahadut HaTorah party leader Knesset member Yaakov Litzman, Netanyahu was on the other side of the line, urging the latter not to compromise on Jerusalem and not to give in to Livni.

In the end, Livni failed in her efforts. The government she was out to form was never established. Israel went to elections, following which Netanyahu set up the government. Wasting no time, he was quick to declare that he would never negotiate over Jerusalem. But as it happens in life, he was maneuvered elsewhere by force of reality.

As of today, Jerusalem is on the agenda of the negotiations taking place between the envoys of Netanyahu and the emissaries of Palestinian Chairman Abu Mazen. The pledge that Netanyahu made at the time to the ultra-Orthodox has been brazenly violated. On Dec. 18 in the Knesset it was revenge time for Knesset member Yaakov Litzman, who is sitting at present, along with the other ultra-Orthodox parties, on the opposition benches. Litzman introduced a private bill, under which no diplomatic negotiations would be held over Jerusalem unless the support of a least 80 Knesset members for the move was secured first.

Netanyahu has found himself in a spot. If he were to support the bill and it was approved, the negotiations between Palestinian Chief negotiator Saeb Erekat, Israeli chief negotiator Tzipi Livni and Kerry would blow up then and there. If he were to oppose the bill, he would be put to shame in the eyes of the Likud right wing, the public at large, the ultra-Orthodox, in particular, and the rest of the world, in general. Netanyahu was thus forced to flee the Knesset plenum to avoid participation in the vote. He was followed by most members of the Likud, Yisrael-Beitenu and HaBayit HaYehudi — the coalition right-wing parties. If Netanyahu refrains from voting against this bill, we are not going to vote against it either, they must have told themselves. No one wanted to be caught raising a hand against the unity of Jerusalem. The truth, though, is that the coalition in which all those run-away Knesset members take part has been negotiating with the Palestinians over Jerusalem all along.

Well, this is reality. Israeli politics is tainted with profound hypocrisy and impossible paradoxes. Senior Likud ministers are regularly discussing options regarding potential solutions to the issue of Jerusalem. In the discreet talks they are holding among themselves, the term “the Holy Basin” is often mentioned. It denotes the small, dense and volatile square at the heart of the city, where numerous holy places of different religions are crowded together. This only goes to show that even in the Likud, they have already realized that quite a number of the neighborhoods in Jerusalem, which are populated by Arabs, will not remain under Israeli control once a final status agreement is reached. Thus, all that they have left is to fight over the holy places. The problem is that to get there — to that dispute — the Israelis, the Palestinians and their leaders will have to cross a lot more Rubicons, so to speak, and to make numerous difficult and critical decisions on the way.

Are they up to it?

If you ask each of the leaders and their corresponding public, the answer is going to be no. If you ask Kerry, he will say yes. In the coming year we will discover who was right.