Common interests have resulted in Israel and Hamas establishing channels of communication for cooperation. 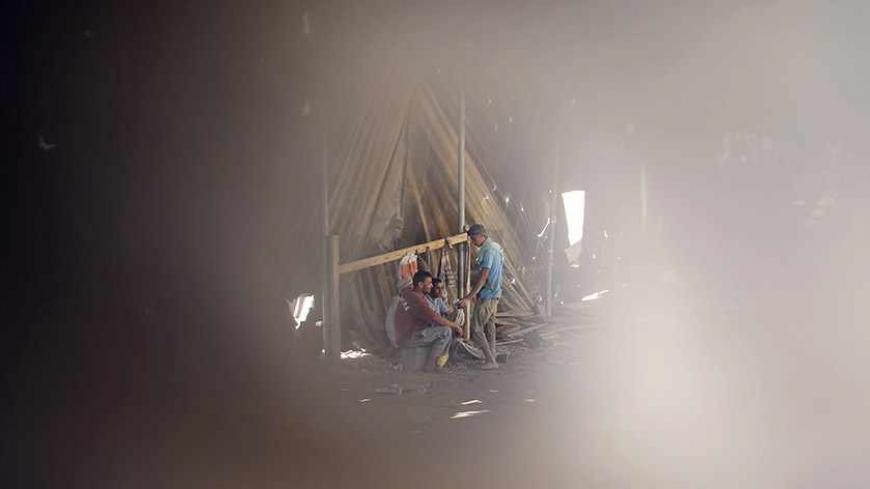 Palestinian tunnel workers rest at the entrance of a smuggling tunnel dug beneath the Gaza-Egypt border in the southern Gaza Strip, Aug. 26, 2013. - REUTERS/Mohammed Salem

Very quietly, under the radar, Israel and Hamas have reached an unwritten agreement for coexistence. This is the first time since the Hamas movement was founded in December 1987 that such a system of understandings and arrangements has existed. The system is based on common interests, and through this, each party in practice accepts the existence and presence of the other. Although there is no official recognition, de facto recognition exists.

Since the fall of the Muslim Brotherhood in Egypt and the all-out war the Egyptian army declared against the Rafah tunnels, Israel has paradoxically become an ally in propping up and sustaining the Hamas regime. This alliance has created active, direct and indirect channels of communication between Hamas and Israel. These channels, most of which were established during the lengthy negotiations for the release of the kidnapped Israeli soldier Gilad Shalit, now make it possible to coordinate a variety of civilian and military matters alike.

It is clear to Hamas that the opening of the crossing points between Israel and Gaza and the continued delivery of daily supplies to the Gaza Strip is maintained thanks to quiet along the border and is conditional upon it. Hamas is also aware that any violation or escalation by it or any other recalcitrant group in Gaza will cause the crossing points to be closed, which means distress for Gazans and pressure by them on the Hamas government.

In recent years, after Israel’s imposition of a blockade against the Gaza Strip after Hamas' violent takeover of the government in June 2007, the extensive Rafah tunnel system had served as an alternative trade route, through which almost anything could be brought in inexpensively from Egypt to the markets in Gaza — everything from fire arms and ammunition, food, cattle, fuel and construction materials to luxury items, such as cars, televisions, computers, cellular phones and more. Even brides were smuggled through the tunnels, but all that is over now.

The tunnel industry has collapsed. Hamas won’t dare mess with the new Egyptian regime, and as stated, Israel (among others) helps Hamas maintain its rule. Thus, at this point in time, an isolated Hamas has became the best default for Israel, and as we all know, Hamas has no other options. And so an effective, unwritten but agreed upon alliance of interests is born. Israel does its part with the regular supply of almost all of Gaza’s daily needs, and Hamas does its share by keeping things quiet on the border. This arrangement is not trivial.

Hamas, which has been dedicated to all-out jihad against Israel, is now forced not only to reign in its military wing, the Izz ad-Din al-Qassam Brigades, so that they do not act independently and irresponsibly in the field, but also to supervise and ensure that no other group in Gaza commits terror attacks against the Israel Defense Forces (IDF) along the length of the border and that no rockets are fired into Israel.

For now, the carrot-and-stick approach is working. Hamas' armed forces are the ones policing the border, and they themselves must now not only abstain from carrying out attacks against Israel, but also fight other groups that want to challenge the movement and execute attacks.

Brigadier General Mickey Edelstein, commander of the IDF’s Gaza Division, recently revealed the operational partnership. At a closed conference with Israeli residents of the areas bordering Gaza, he said that Hamas is allowing the IDF entry into Gaza up to 100 meters (328 feet) to stop potential terrorists. Not only is Hamas’ consent to this surprising — as in the past the group had fought for every centimeter of land — but so is the manner in which the channel of communication works. It can’t be qualified as anything but military cooperation.

Over the years, Israel has found people through whom it is able to convey messages to Hamas' decision makers. In some cases, messages are conveyed directly to Prime Minister Ismail Haniyeh. To a small extent this is achieved via businesspeople in regular contact with those responsible for the crossing points in Israel. There are also, however, more direct channels for conveying information in real time, based on a desire to maintain the status quo. As stated, there is a common interest — to maintain the routine on both sides of a quiet border.

That said, the alliance of interests is not solely military. It is also about civilian affairs. During the powerful storm Dec. 13-14, Hamas used various aid organizations to ask Israel to help it handle the heavy flooding and damage in Gaza. In parts of Gaza where the infrastructure is poor, for example, in the refugee camps, floodwaters reached 1.5 meters (5 feet) — needless to say, the drainage systems could not handle the massive downpour — and hundreds of residents were evacuated from their homes. Israel agreed to help, sending Hamas pumping equipment along with fuel, diesel and gasoline.

Thus, 26 years after Hamas' establishment, a formula for de facto coexistence between the organization and Israel has been found. It is based on deterrence on the one hand and common interests on the other. The question is whether this partnership can be developed into, for example, a permanent agreement. It’s doubtful.

Both parties, Hamas and Israel, are still hostage to beliefs that over the years have become set in stone: Hamas in its extreme charter and Israel in its staunch position that Hamas is a terror group. In the meantime, secret arrangements that no one would have thought possible are convenient for both sides. It turns out that after two major military offensives in Gaza (Operations Cast Lead and Pillar of Defense), hundreds of terror attacks against Israel and military operations in the Gaza Strip that have together left thousands dead, a formula for a modus vivendi has been found. And that’s not trivial. Not trivial at all.