The Sunni demonstrations may not last much longer, but their end will not mean that Iraq’s sectarian problems have been addressed. 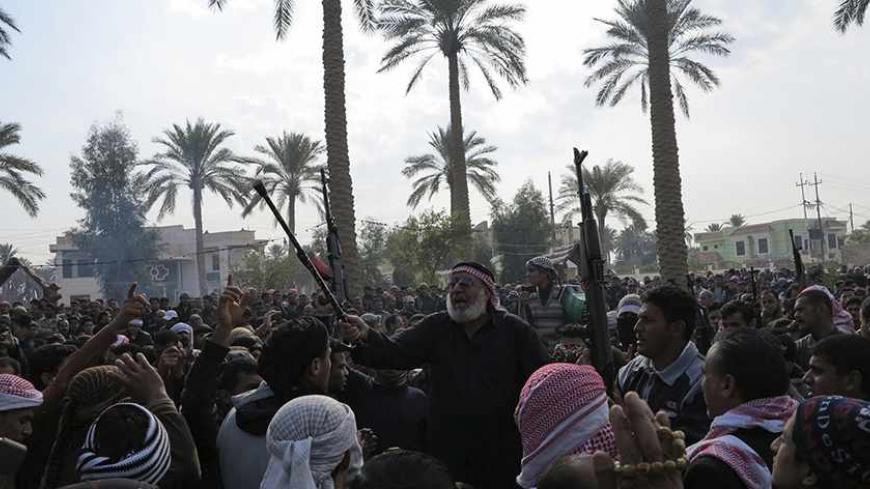 Residents gather to protest near the house of prominent Sunni Muslim lawmaker Ahmed al-Alwani, who was arrested by the police in Ramadi, Dec. 29, 2013. - REUTERS/Ali al-Mashhadani

It's not easy to establish a road map for any crisis, especially in a country as complex as Iraq. This applies to most challenges faced by Iraq in the past 10 years, including the Sunni demonstrations that launched in December 2012.

The demonstrations, which began with arrest warrants on charges of terrorism for some security staffers working for Iraqi Finance Minister Rafie al-Issawi, have changed their goals more than once. They raise some general slogans that continuously escalate before being diffused.

While the demonstrations were in tumult and expanding, those responsible for them failed to produce leaders capable of holding direct negotiations with the government, until the government the matter ended by delegating Anbar’s provincial government with that task, then withdrawing that mandate a few weeks later.

For a full year, the Iraqi government was inconsistent in its dealings with the demonstrations. In the early days, there was some confusion when the government used excessive force in cracking down on them. But then, the government’s accusations were gradually withdrawn and it agreed to negotiate. On Dec. 22, Prime Minister Nouri al-Maliki gave the protesters a deadline to evacuate the squares, which he said had become a hive of al-Qaeda activity.

The truth is that the Sunni protests are confined to Anbar province after spreading throughout the past year to the cities of Mosul, Tikrit, Samarra, Diyala and some Baghdad neighborhoods. The gradual shrinking was not linked to the achievement of the demonstrators' demands, but rather to the timing of the withdrawal of parties who had been supporting them and giving them political cover. The demonstrations were used to influence voters in the provincial elections in April 2013. The demonstrations were also used by al-Qaeda and other armed extremist groups with a violent history in Sunni cities to fan the flames of civil war.

All these factors caused the protesters to gradually withdraw from the sit-in squares, leaving just two squares occupied in Anbar province: one in Ramadi and one in Fallujah.

In addition to of the demonstrators’ stated demands, their legitimacy and whether government fulfilled them, external factors have also played a role in determining the path of the crisis. Foreign states and other regional actors strongly interfered as well.

The question today is: Could the demonstrations crisis have been resolved in its early stages?

Different parties will answer differently. The government claims that it did all it could to resolve the crisis. It formed committees to look into the cases of the detainees and released hundreds of them. The demonstrators and their supporters assert that they have remained committed to the demonstrations’ peaceful nature despite the transgressions and clashes that have occurred, most notably in Hawija.

Politics is not built on fixed rules. Political logic says that an unlimited number of solutions can be found, but the range of available options and solutions is shrinking as time passes and the number incidents increases, which in turn raise the complexity of the crisis.

Because of that, the possible solutions in December 2012 would have been much easier to implement than those of December 2013. In 2012, the demands of the demonstrations were still within reason.

No one could have guaranteed that the demonstrations would have stopped had the government responded positively and opened a dialogue immediately with the tribal leaders and clerics who supported the demonstrations, but at least things would be clearer than they are today.

The Sunni demonstrations in Anbar will likely draw to a close. Everything indicates that the sit-ins will soon end, hopefully in a peaceful manner and not by a military confrontation. Ending the Anbar demonstrations, however, as happened in other cities, will not address the essence of the crisis.

At the national level, what’s needed are radical solutions to the issues that fueled the protests. Leaving things hanging and treating the end of the sit-ins as the end of the political, social and sectarian crisis would be unwise.

The Iraqi government and the various Iraqi political forces should try addressing the deep national rifts that produced the Anbar demonstrations. Those rifts keep threatening the country with civil war or partition. Iraqis should pause for a while and try to settle their crises that keep getting postponed.

The crisis is not about the Sunni detainees, nor about Sunni participation in the government and certainly not about the case of Rafie al-Issawi, Tareq al-Hashemi or any other particular individual. The crisis is about the mutual suspicion accumulated over years and perhaps decades between Iraqi cities, peoples and sects. Iraq’s politicians should act responsibly and in accordance with a long-term strategy to eliminate these suspicions and replace them with national trust as a permanent solution.