Egyptian security is taking several measures to protect Coptic churches during the holiday season, especially since it coincides with former President Mohammed Morsi's trial on Jan. 8. 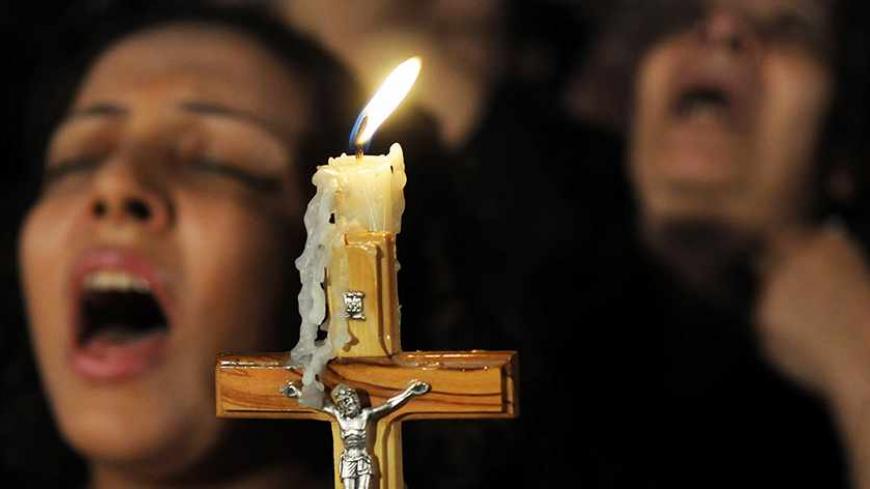 Egyptian Coptic Christians carry a cross and chant prayers during a candlelight protest marking one week since sectarian clashes with soldiers and riot police at a protest against an attack on the Abassaiya Cathedral, Cairo, Oct. 16, 2011. - REUTERS/Stringer

With the approach of Christmas celebrations, the Egyptian Church is tense in anticipation of violence and bombings against Coptic churches, similar to what happened when the Rabia al-Adawiya sit-in was broken up in August.

The current tension is due to reports by Egyptian media outlets about a plot by Muslim Brotherhood militias to blow up a number of churches during the celebrations for Coptic Christmas at the beginning of January, which will coincide with the second session of the trial of ousted President Mohammed Morsi on Jan. 8.

That information has worried church officials, who have expressed their apprehensions to Pope Tawadros. Tawadros said he would meet with senior officials to discuss how to secure the churches. He is also considering the church’s proposal to move prayer time earlier to help the security services in protecting the churches.

The US State Department was quick to warn its nationals in Egypt of a new wave of violence that would coincide with the holiday season, calling for caution and avoiding unnecessary risks. In a statement published on its website, the US Embassy in Cairo advised: “Demonstrations continue throughout the country, oftentimes accompanied by sporadic exchanges of violence between protesters and security forces and/or residents.”

The statement noted that embassy personnel are required to get permission before traveling outside of Cairo or Alexandria, adding that the tourist resorts in Hurghada, Sharm el-Sheikh, Luxor and Aswan “tend to be safe.”

The embassy also stressed that US nationals in Egypt should avoid going to areas that may see large concentrations of people, and that demonstrations whose organizers assert will be “peaceful” may turn violent, thus breaking the law of the right to demonstrate recently approved by the government.

This comes against the backdrop of information that Egyptian intelligence services are monitoring correspondence between the international wing of the Muslim Brotherhood and members of Hamas on the one hand and terrorist and jihadist groups in the Sinai Peninsula on the other hand, to implement simultaneous terrorist operations against tourist sites and churches on New Year’s Eve.

According to the security information, those groups have been instructed to continue their so-called holy war against the Egyptian army and police, and that money and weapons will arrive within a few days through the tunnels between Gaza and the Sinai Peninsula by three persons belonging to the military wing of Hamas.

For its part, Egyptian authorities declared a state of maximum alert near churches during Christmas celebrations. A plan to secure the celebrations in all Egyptian governorates was developed in coordination with the armed forces. The plan includes operations to secure churches, monasteries, hotels and resorts, the redeployment of forces and the intensification of security patrols to reassure the citizens. The Interior Ministry ordered the security directorates nationwide to hold periodic meetings to coordinate security during the holiday, enforce the law and protect public facilities.

Maj. Gen. Ahmed Helmi, the interior minister’s first assistant for security, said that warnings by the US State Department for its nationals in Egypt about a new wave of violence with the approach of the Christmas season are common during the holiday seasons. He added that there is a comprehensive security plan for the embassies and state facilities, pointing to the existence of security measures to counter any attempts at causing chaos, strife or unrest.

Perhaps what is complicating matters is that Christmas celebrations are coinciding with Morsi's second trial session on Jan. 8. Jihadist groups have threatened terrorist attacks during Christmas celebrations. In October, the Church of the Virgin Mary in al-Warraq was attacked. Five were killed and dozens were wounded.

Security agencies have increased coordination between explosives-detection personnel and civil protection to thwart any attack. They are working, in coordination with explosives detection personnel, to monitor cars that are parked near churches and that can be used in terrorist operations. They are inspecting garbage bins and trees where explosives can be planted. Streets leading to churches will also be combed. The security agencies are working with church leaders nationwide to place electronic gates, and search and identify visitors in collaboration with members of the Boy Scouts. Priests have also agreed to change the time of the faithful leaving churches, whereby they leave gradually, and do not gather in large numbers in front of the churches before prayer.

Despite the security alert by the army and police, and the presence of military vehicles to guard churches and vital installations, there is still some anxiety among Copts, and also among Muslims, since most Egyptian churches are in Muslim areas. Even for church weddings, most invitees are Muslim because of the close relationship binding Coptic and Muslim families in Egypt, especially in poorer neighborhoods.