During the Assumption of the Virgin Mary, Egyptian Copts and Muslims both visit churches across Egypt, ignoring the high temperatures and terror attacks sweeping the country. 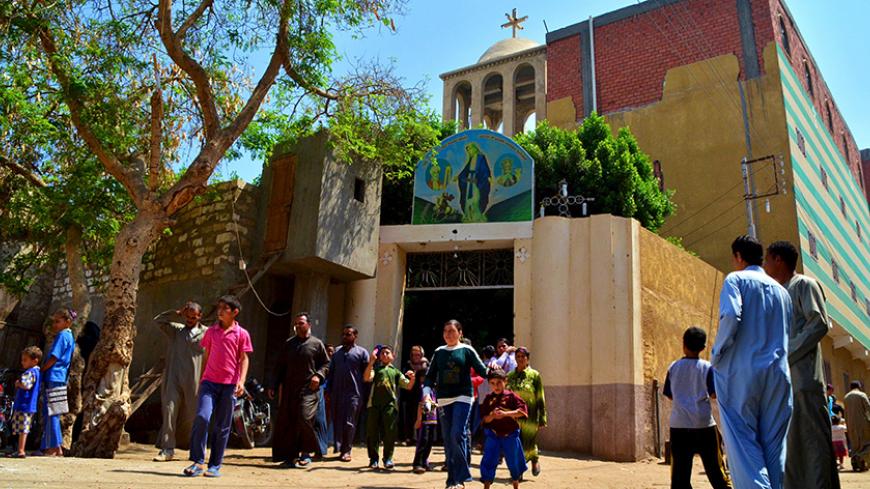 Christians leave after Sunday service at the Al-Galaa Church at Samalout Diocese, in Minya governorate, south of Cairo, May 3, 2015. - REUTERS

CAIRO — Christians and Muslims in Egypt flocked to churches and monasteries bearing the name of the Virgin Mary to take part in the festivities of the Assumption, which started on Aug. 6 and lasted 14 days. The Virgin Mary Church in Mostorod in Cairo has a special place in the Coptic history as one of the sites visited by the holy family when they came to the land of Egypt and an archaeological shrine of the Virgin Mary.

In the province of Assiut, on Aug. 8, Copts crowded the monastery of the Virgin Mary in Daranka, where the holy family also visited.

As churches across Egypt's governorates hold prayers and chant hymns for 14 days, Copts fast in commemoration of the Assumption.

Despite the wave of terrorist attacks that have plagued Egypt during the past few months, such as the Italian consulate bombing on July 11 and the assassination of Attorney General Hisham Barakat on June 29, Virgin Mary attractions saw a large turnout. Visitors seemed unconcerned about the possibility of violence that could target large gatherings or churches during these festivities, as happened in the Virgin Mary Church in al-Warraq on Oct. 20, 2013, when an attack left four dead, including a child.

The Virgin Mary celebrations coincided with the second anniversary of the raid by security forces on Aug. 14, 2013, of protests in al-Nahda Square and Rabaa al-Adawiya Square in support of isolated President Mohammed Morsi. Unidentified groups also burned several churches.

In front of the Virgin Mary well in Mostorod, where Jesus Christ once bathed, Amjad Samir waited with his young sons for their turn to drink and then headed to the church hall to take part in the Assumption prayers.

Samir told Al-Monitor that not a year goes by without him visiting the archaeological Church of the Virgin Mary in Mostorod with his children despite terror concerns. He said that the Virgin Mary will protect those who love her.

Samir said he has become accustomed to buying candy outside the church and walking with his children. The holiday, to him, “is not only limited to prayers but includes different activities in the vicinity of the church such as games, candy selling and pictures of saints and the Virgin.”

Samir explained that terror is not the only issue that concerns visitors, as high temperatures add to their burden. The hot weather that swept Egyptian provinces in August has resulted in the deaths of more than 80 people.

He said that visitors complain about overcrowding amid high temperatures in the vicinity of the church and the poor ventilation inside, and many opt for night visits.

Mohammed pointed out that many Muslims take part in the Virgin Mary festivities in several provinces, and that she “rejects the fatwa whereby sheikhs and Muslim clerics forbade greeting Copts on their holidays or sharing such holidays with them.”

Mohammed said that she will not hesitate to visit the Virgin Mary, no matter what happens, even in the event of terrorist operations against festivities, because she loves the Virgin Mary and is keen to visit her church in Mostorod.

For his part, Father Abdel Massih Basit, pastor of the Church of the Virgin Mary in Mostorod, confirmed to Al-Monitor, “The terrorist operations did not affect the church festivities. On the contrary, the number of visitors was higher than any other year. Egyptians insist on pursuing their lives normally regardless of the intensification of terrorist incidents.”

Basit said he had expected the number of visitors to drop because of the hot weather, but he was wrong.

Asked about the security measures in the area around the church, Basit said that he is in constant contact with the security services and that there are always leaders from the Ministry of Interior in the church. “There is a security checkpoint in front of the church, and on Friday [Aug. 14], the celebrations were surrounded by major security measures, given the concurrence of the second anniversary of the raid on the two protests that were held in al-Nahda Square and Rabaa al-Adawiya Square,” he explained.

Basit said that the church relies on its own personnel to keep order inside the church and to inspect visitors at the electronic entrance gates.

He added that those most concerned with the safety of visitors during the Virgin Mary holiday are the area's Muslim residents, who financially benefit from the high turnout that brings business to local stores. Therefore, these people help security forces with the protection of the church. Security forces are deployed 24 hours a day during the festivities that last two weeks, said Basit.

Former assistant to the interior minister and security expert Gen. Ashraf Amin told Al-Monitor that the success of the state in securing the new Suez Canal inauguration ceremony on Aug. 6 encouraged Egyptians to go to the celebrations of the Virgin Mary. Amin pointed out that the Ministry of Interior always develops security plans to secure celebrations, fearing the targeting of places of worship.

He explained that the security forces tighten security measures by deploying secret police forces to protect citizens from any terrorist operations.

It seems the Egyptian people have grown accustomed to terror and moved on with their lives, and nothing will deter them from participating in their religious holidays.