Bishop Beeman, who coordinates ties between the Egyptian and Ethiopian Coptic churches, has told Al-Monitor that the church could play an indirect role in solving the Renaissance Dam crisis between the two countries. 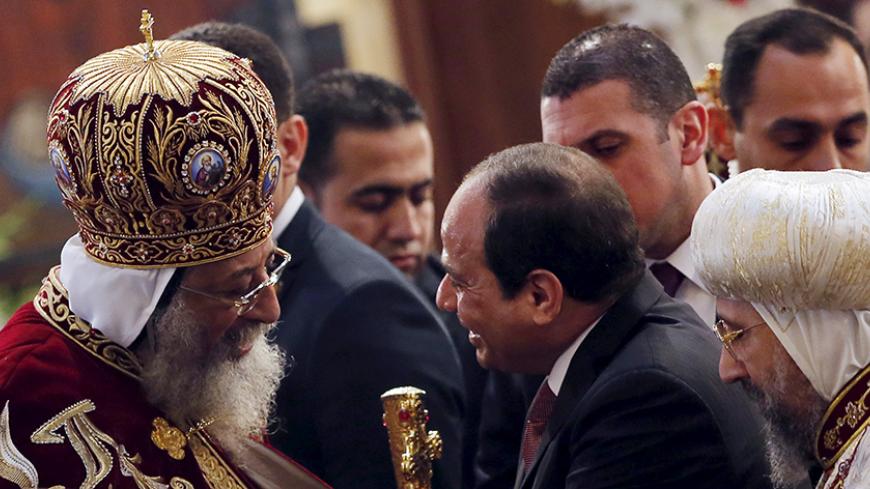 CAIRO — The Ethiopian and Egyptian Coptic churches share close historical relations. Their ties have prompted some in Egypt to try to capitalize on the Coptic community in Ethiopia and the strong relations between these two churches to work toward solving the Renaissance Dam crisis.

Bishop Beeman, the coordinator of relations between the Ethiopian and Egyptian Coptic churches and chairman of the crisis management committee at the Coptic Holy Synod, told Al-Monitor that the church plays an indirect role in the Renaissance Dam crisis, explaining that the Ethiopian people will not allow Egypt to be harmed. Beeman talked about the churches attacked and burned after security forces broke up sit-ins being held by supporters of former President Mohammed Morsi at the Rabia al-Adawiya and Nahda Squares. He also addressed the latest efforts deployed by the armed forces to rebuild or renovate these churches. The text of the interview follows:

Al-Monitor:  In your capacity as coordinator of relations between the Ethiopian and Egyptian Coptic churches, do you think the Egyptian Coptic Church can play a role in resolving the Renaissance Dam crisis?

Beeman:  Based on its historical and spiritual ties with the Ethiopian church, the Coptic Orthodox Church can play an indirect role. The church is the soft power trusted by Egypt and Ethiopia. The church is openly fulfilling its duties in an organized and orderly manner and is sending messages of love to the Ethiopian people. We seek to consolidate relations between the Ethiopian and Egyptian peoples in order to create a suitable climate for politicians and technicians so as to improve the dam negotiation.

Beeman:  What I mean is that the Ethiopian people and church will not allow the government to harm the Egyptian people. This was confirmed by the Ethiopian church leaders in all of our meetings. They always asked the Egyptian people to help them in their development process. President Abdel Fattah al-Sisi has stressed that the development of Ethiopia is in Egypt's best interest, provided that Egypt's Nile water quota is not prejudiced.

Al-Monitor:  Can the Ethiopian church play a role in solving the Renaissance Dam crisis?

Beeman:  The Ethiopian church is the voice of the Ethiopian people, and an active government expresses the will of its people. Ethiopians are expressing their love for the Egyptian people and their keenness on supporting the Egyptians’ interests.

Al-Monitor:  You have been present during President Sisi’s visits to Ethiopia. Do you think that such visits help in advancing toward a solution to the crisis?

Beeman:  President Sisi visited Ethiopia twice. Presidential visits contribute to solving the crisis. It should be noted that the president’s speech before the Ethiopian parliament had a significant impact and was a clear message to the Ethiopian people that Egypt appreciates Ethiopia.

Al-Monitor:  There is a dispute between the Ethiopian and Egyptian Coptic churches concerning ownership of Deir es-Sultan, a monastery atop the Church of the Holy Sepulchre in Jerusalem. What is the status of this dispute? Does it impact relations in general between the two branches of the church?

Beeman:  The Deir Es-Sultan crisis is stagnant, but after the ordination of Anba Anthony as the new bishop of Jerusalem, the case will be revived. We do not mention this crisis during the meetings with the Ethiopian church’s leadership, as we are waiting for the right time to discuss it amicably with them.

Al-Monitor:  In your capacity as the chairman of the Crises Council in the Holy Synod, how many of the churches burned following the breakup of the Rabia al-Adawiya sit-in have been restored?

Beeman:  Sixty-two sites were attacked after the dispersion of the Rabia and Al-Nahda sit-ins. By "site" I mean both the churches and annexed buildings. The armed forces finished the first 10 sites, which constituted the first phase, while 10 other sites were renovated during the second phase. We now have 24 sites, including 14 sites that need to be demolished, rebuilt and partially renovated. The other sites only need to be repainted. The church handled some of the sites, amid facilitated renovation measures and the cooperation of the executive authorities in granting us permits.

Al-Monitor:  How much does it cost to renovate the burned churches?

Beeman:  The state has spent 89 million Egyptian pounds (about $11.3 million) in recent years on the renovation of burned churches.

Al-Monitor:  Did the church incur any costs for renovating the burned churches?

Beeman:  The church did not spend one dime on the renovation. The government handled the renovation of most of the burned churches.

Al-Monitor:  Did businessmen contribute to these renovations?

Beeman:  Church members helped renovate some sites that did not require a huge budget and that were only slightly damaged. The donations were not big, barely reaching 1 million pounds ($112,000), and we must thank them for this help.