Syrian government and opposition jockey ahead of Geneva II

As preparations continue for the Geneva II conference, both the Syrian opposition and the regime seem increasingly divided over their respective positions on the talks. 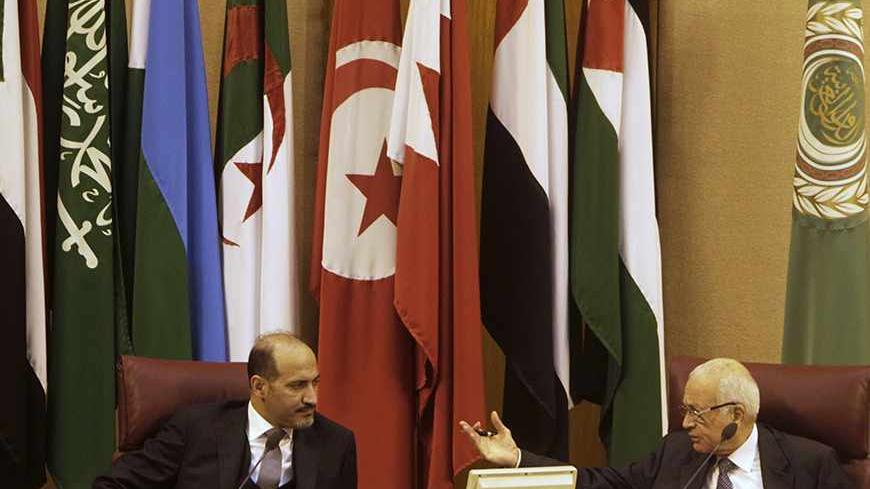 The Syrian scene is getting more blurry and complicated as political and diplomatic efforts compete with military battles for gains on the ground prior to the Geneva II conference, for which a date has yet to be agreed upon.

On Nov. 11, the opposition Syrian National Coalition (SNC) announced its readiness to participate in the conference on the condition that it leads to the formation of a transitional authority with full powers and that the regime of Syrian President Bashar al-Assad does not have a role in the transitional phase.

Saleh Mubarak, a member of the SNC, revealed in a Skype interview with Al-Monitor that international parties are exerting pressure on the coalition to participate in Geneva II. He said that he supported the coalition's position to attend the conference "provided that Assad has no part in the future of Syria."

It is worth noting that Russia's Deputy Foreign Minister Mikhail Bogdanov visited Istanbul Nov. 13 to meet with the SNC leadership. Mubarak clarified that SNC head Ahmad Jarba did not attend the meeting, which aimed to assess the opposition's position after it decided to participate in Geneva II.

The Saudi daily Al-Hayat quoted SNC leaders who participated in the meeting as saying that the SNC delegation asked Bogdanov about Moscow's position on the role of Assad in the transitional phase. The deputy foreign minister informed them, "This matter is to be decided upon by the Syrians themselves, in the Geneva II negotiations." But the opposition delegation noticed a Russian flexibility that did not exist previously.

Bogdanov invited Jarba to visit Moscow. It was agreed that they would arrange for an SNC delegation, headed by Jarba, to visit the Russian capital later this month. Meanwhile, a Syrian delegation, including presidential adviser Buthaina Shaaban and Deputy Foreign Minister Faisal Mekdad, visited Moscow on Nov. 18 to discuss preparations for Geneva II.

Mubarak believes that Russia's position on resolving the Syrian crisis has begun to change somewhat. When asked about the reason for this optimism, given that Russian President Vladimir Putin spoke by telephone with Assad Nov. 14 — the first communication of this kind in more than two years — Mubarak replied, "Russia's diplomacy is very strange, and often gives contradictory messages. Anything is possible, but Moscow’s strong support for Assad is aimed at having the strongest cards possible at the [negotiating] table in Geneva." He added, "I think that Russia wants to ensure that the post-Assad regime is not hostile to [Moscow]. They are afraid of the extremist Islamists, because these [groups] are linked to some extremist organizations in Chechnya, Dagestan and other places."

On Nov. 16, Russian Foreign Minister Sergey Lavrov described the Syrian opposition's demand of Assad's departure as a condition for participation in Geneva II as "unrealistic."

When asked how Assad would be toppled, in light of the progress of the regime's military forces and the decline of opposition forces in multiple regions, Mubarak said that this would be achieved by "lifting Russian support. Quite simply, Russia could press Iran and [the latter] could give Assad the chance for a safe exit. This is if there is an international consensus to pull the rug out from under Assad's feet. But the dispute is over the transitional phase and who will govern."

Mubarak did not rule out Geneva II being held early next year, but he believes that the regime and the opposition were racing to take more locations on the ground. He said that while the opposition has fallen behind in certain areas, it has made progress in others.

On the other hand, Syrian parliamentarian Sharif Shehadeh said that the success of Geneva II depends on all parties. In an exclusive telephone interview with Al-Monitor, he said, "The Syrian opposition, to this moment, does not want [Geneva II] to succeed. The statements the opposition has made recently are directed in a negative manner toward disrupting the conference." Shehadeh added that the Syrian government "does not deal with the Geneva conference based on a position of strength, but rather based on a position of rationality. Because [the government] wants the conference to succeed, it has talked about it and discussed it for a long time. The government, until this moment, wants [Geneva II] to succeed. This is evident through its actions and the statements of its officials."

For his part, Syrian parliament member Ammar al-Assad told Al-Monitor that Geneva II would be held "because it is the last chance for the coalition [involved in] the conspiracy against Syria. [The opposition] is worried about the army's progress and the fact that it has gained control of new areas. There has been a decline in tools [a reference to the armed insurgency] on the ground. Therefore, Geneva II is a savior to them."

In turn, Syrian dissident Bassam al-Kadi expressed his hope that Geneva II would not be held. Speaking to Al-Monitor by phone, he said, "[Geneva II] is aimed at dividing power between the regime and leaders of terrorist groups. Any conference concerned with Syria's interests must be held within Syrian territory, and under cover of freedom and true democracy, away from dictatorial authorities."

Kadi, a dissident based in Syria who was previously imprisoned, said, "Geneva II is not in the interest of the Syrian people, and will only partially succeed in stopping the armed violence. Even if it could fully succeed, the violence will return later to explode." He noted that any conference that wants to save Syria "should be established for a democratic Syrian-Syrian dialogue, and for a civil society and a state [composed of] serious institutions based on law, human rights and ensuring freedoms, equality and citizenship."

Regarding the Syrian army's progress in a number of provinces, Shehadeh said, "These successes are truly powerful, and talk about the Syrian government exploiting [these gains] and investing in them politically is not true. The Syrian [government's] line is clear: It wants a political process to succeed. Furthermore, the Aleppo battle will absolutely be resolved in favor of the Syrian army."

Regarding the Kurds' declaration of autonomous rule in their areas, Shehadeh pointed out, "Those who say that the Kurds want independence or an autonomous government are wrong. They have not talked about intentions for independence. Everything they are doing militarily in their areas is aimed at ensuring stable security conditions."

His colleague, Ammar al-Assad, believes that the Kurds' declaration of local administration was carried out in coordination with the Syrian government. He said that those exaggerating the matter "want to create a rift between Syrians and distort the gains made by popular Kurdish protection forces that are supported by the state. [They are] just like any popular committee in any region of Syria." He stressed, "Our Kurdish brothers are patriots, and there are no illusions" about their intention to secede from Syria.

For his part, Kadi does not believe that the Kurds' declaration of autonomous administration means the formation of self-rule and said, "The reality is that talk of forming an 'autonomous administration' differs greatly from self-rule. [Autonomous administration] is based on administering specific regions given the special circumstances related to the internal civil war." Kadi added, "I do not think that the Kurds are inclined to secede or declare independence from Syria. But in any case, the Kurdish issue is something that should have been seriously discussed a long time ago. It is one of the criteria for the formation of a democratic Syria in the future."

The opposition SNC formed its interim government, headed by Ahmad Tomeh, a week ago. It held its first meeting in Istanbul.

Shehadeh said that the SNC's declaration that it had formed an interim government "shows short-sightedness and a lack of awareness of reality. It is an attempt to disrupt Geneva II."

Meanwhile, Kadi accused the SNC of being "mere collaborators who are unable to form anything — neither a government nor even a leadership. They depend on the 'Zionist-Wahabbist' revolution.”

A Syrian media source who spoke to Al-Monitor on condition of anonymity said that the issue of Kurdish autonomous administration frightens the Syrian people. This is because it threatens the unity of the country, the Syrian social fabric and coexistence between sects and ethnic groups. It raises the issue of federalism and opens the way for the emergence of "divisive parasites" within all nationalities and communities in Syria, as some may consider demanding similar rights.

The same source said that the Syrian regime is making maximum efforts on several fronts to achieve military gains that will strengthen its negotiating stance before the awaited political settlement at Geneva II. He revealed that the regime is focusing more on the Aleppo and Damascus countryside fronts, and linked the armed opposition's decline to internal divisions, the relative decline in international support and the waning aid reaching it. There are areas besieged by the regime forces on all sides, where insurgents are dying of hunger, especially on the Homs fronts.

The Syrian army has made significant military progress in the Damascus, Aleppo and Homs countrysides, where it has regained control of a number of towns from armed and jihadist opposition groups. Meanwhile, there are signs of an approaching battle for the region of Mount Qalamoun, near the Syrian-Lebanese border. A large number of Syrian families have fled the region's villages to Lebanon, while the Syrian army has entered two towns in the region and shelled the town of Qalamoun.