Any peace process on Syria should not remain the exclusive domain of armed belligerents responsible for destroying the country, argue Syrian civil society activists. 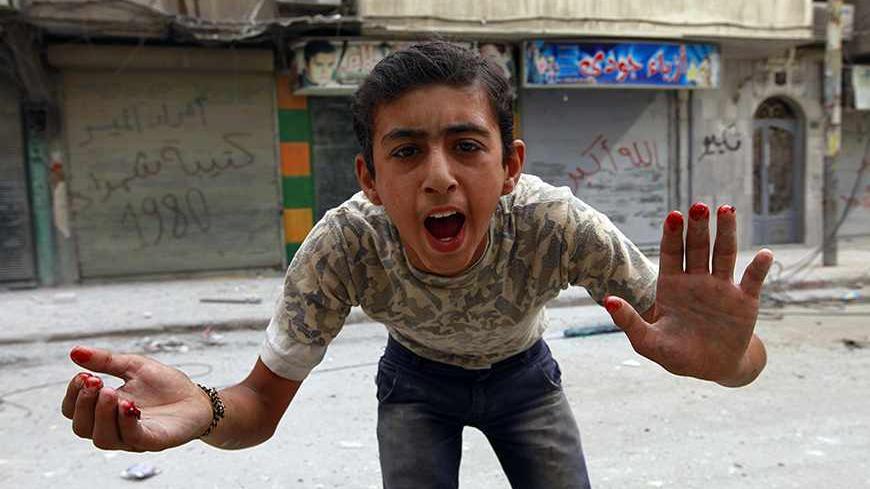 A boy gestures at the camera with blood on his fingers in the al-Myassar neighborhood of Aleppo, Sept. 19, 2013. - REUTERS/Hamid Khatib

BEIRUT — As preparations for Geneva II again falter, with one Western diplomat telling Al-Monitor that it will likely be delayed until “at least January,” a debate has emerged over the role Syrian civil society can play in any peace process.

Beneath the raging violence in Syria is an emerging civil society working and preparing to heal the wounds of the war once the guns fall silent. They have taken a step out of the political rhetoric and are working in a plethora of fields to ensure there are adequate post-war mechanisms in place to guide the country through reconstruction.

Now, some of them want to be included in Geneva II.

The SCPR is a Damascus-based independent think tank founded by five researchers who are now working around the clock to monitor, research and provide regular data on Syria’s war. Their work has been duly recognized, with the United Nations Development Programme and United Nations Relief and Works Agency commissioning the SCPR to produce their most recent quarterly report, the "Socioeconomic Monitoring Report of Syria."

“We need to have more attention on Syria’s civil society. … This is one of the centers whose priority is to express the real interest of the people of Syria, not of some parties,” said Nasser.

Reducing Syria’s complexities to two camps — loyalist and opposition — and viewing it only through the prism of violence will fail to produce significant results at Geneva, Omar Hallaj told Al-Monitor. Hallaj is the former CEO of the Syria Trust for Development and now a part-time professor at the American University of Beirut.

“This whole Syrian crisis has been played as if it’s a black-and-white situation. The reality is Syria has a very wide spectrum of public opinion, of interests, of backgrounds, of social groups, of economic interests, and in many ways it’s very important that all of these are represented,” said Hallaj, who is still active in a number of Syrian civil-society initiatives.

The inclusion of civil society has indeed been discussed among Western circles and the external Syrian National Coalition (SNC), another Western diplomat, who also wished to remain nameless, told Al-Monitor.

“We want to bring them in. We want this to be a UN process that’s part of Geneva II,” the source said, adding that Western powers are encouraging the SNC to reach out to Syrian civil-society groups.

“The coalition, as the legitimate representative of the Syrian people, has to listen to this viewpoint,” the diplomat said.

Any direct role for civil society on the negotiation table would be unlikely, the diplomat conceded, as the SNC will be “the heart and lead of the delegation,” and adding that such groups should be part of a “wider Track II process, forming the environment in which negotiations take place.”

One fear illustrated by Nasser was of armed belligerents taking the spoils in any agreement, should civil society and nonviolent actors not be included in the peace process.

“We will continue to suffer from this crisis forever if we have an exit strategy with warlords controlling the country,” he said. “Any solution like the solutions of Iraq or Lebanon or Yemen will not build a mechanism for building the future.”

While civil-society groups press their case for inclusion in the peace process, the failure to kick-start Geneva II thus far is prolonging Syria’s woes. Its humanitarian crisis worsens each day, and human development index indicators continue to slip at a drastic rate. In a presentation to the European parliament in June on the humanitarian crisis facing Syria, Hallaj noted, “With every month of continued violence, Syria loses one year of development.”

“If the violence continued till next summer, all development indicators in the country will be reduced to the bottom of the development ladder along with countries like Somalia,” Hallaj told the European Parliament, a copy of whose presentation was obtained by Al-Monitor.

Nasser concurred with Hallaj’s findings, saying, “We think we are now in the level of development of the late 1970s in Syria.”

The SCPR’s April-June 2013 report, released in October, also made it clear in numbers just how far Syria has sunk across the board.

According to the report, Syria’s economy has lost a total of $103.1 billion since the crisis began in 2011, an equivalent of 174% of its GDP in 2010. Public debt has soared to 73% of GDP, nearly half the population is now unemployed and roughly half of Syria’s children no longer attend school. More than a third of Syria’s population has been uprooted, including the internally displaced, refugees abroad and emigrants.

Even more distressing is the rise in poverty rates, which will have serious humanitarian consequences if the war continues unabated, particularly with winter approaching.

“The number of people who have been introduced into the poverty rate is 8 million, which is more than a third of the population, because of the crisis,” Nasser said, noting that this figure represents an increase of roughly 30% of the population since 2010.

The SCPR report noted that over half of Syrians now live below the poverty line, with 4.4 million in extreme poverty. This increase is leaving larger parts of the country susceptible to disease and malnutrition, and combining the necessary ingredients for a major humanitarian crisis should temperatures worsen this winter.

“We’re sinking deeper and deeper into environmental and poverty conditions that will be consuming people’s lives into the thousands not so far into the future,” warned Hallaj.

“The environment has been good for the past three years, so there is a minimum production of agriculture that will provide a safety net for people. If the environment changes, or if this winter is worse, or if we don’t have enough rain, we will have a very important challenge, which is food security,” Nasser explained.

The failure of Syria’s armed belligerents to consider the dire humanitarian and developmental consequences of their actions irks these activists. “Everybody is using the agony discourse as a way to support [their] political position. But the actions they are undertaking at this stage are not actions conducive to saving people’s lives over the long run,” Hallaj said.

The financial support, often foreign, for both regime and armed rebel factions is allowing the war to continue without such groups feeling the pinch of the degradation of Syria’s economy.

“The mechanism is improving for financing the violence to continue, and there’s a lot of interest in that,” Nasser said, echoing UN Secretary-General Ban Ki-moon’s plea for all foreign states to cut supplies to their armed allies.

“[The armed forces] can be self-financed, and they can continue this tragic war. This should be stopped.”