Tillerson says US troops to stay in Syria; US huddles with allies over Sochi

Secretary of State Rex Tillerson said the US military will stay in Syria to prevent the return of the Islamic State, deter Iran and bolster post-war diplomatic efforts. 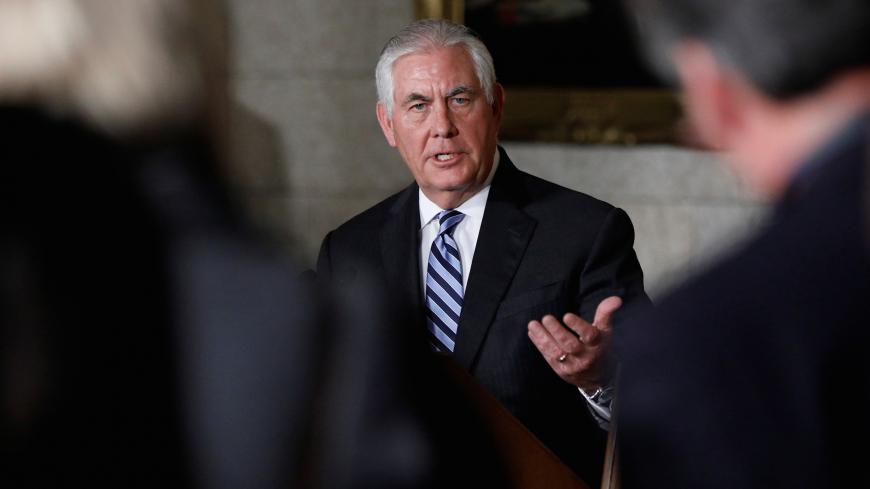 WASHINGTON — In a sharp reversal from the positions US President Donald Trump campaigned on, Secretary of State Rex Tillerson said today that the United States will maintain an extended military presence in Syria to prevent the return of the so-called Islamic State (IS), deter Iran and to bolster a United Nations-backed political process that would eventually see Syrian President Bashar al-Assad leave.

Tillerson's comments come as the Trump administration has been huddling with allies about how to handle Russia's desire to host a Syria national dialogue in Sochi later this month. Tillerson is expected to meet with Russian Foreign Minister Sergey Lavrov in New York on Friday, a diplomatic source told Al-Monitor.

“We understand that some Americans are skeptical of continued involvement in Syria and question the benefits of maintaining a presence in such a troubled country,” Tillerson said today in a major speech on the way forward in Syria hosted by Stanford University’s Hoover Institution. “However, it is vital for the United States to remain engaged in Syria for several reasons.”

“First, [IS] and al-Qaeda in Syria suffer an enduring defeat, do not present a threat to the homeland and do not resurface in new forms,” he said. “Second, the underlying conflict between the Syrian people and the regime is resolved through a UN-led political process … and a stable, unified, independent Syria, under post-Assad leadership, is functioning as a state.”

“Third, Iranian influence in Syria is diminished; their dreams of a northern arch are denied; and Syria’s neighbors are secure from all threats emanating from Syria,” Tillerson said. “Fourth, conditions are created so that refugees can begin to safely and voluntarily return to Syria. Fifth, Syria is free of weapons of mass destruction.”

“The Trump administration is implementing a new strategy to achieve these end states,” Tillerson said. “Our diplomatic efforts will be characterized by stabilization initiatives and a new emphasis on a political solution to the Syrian conflict.”

Tillerson’s speech, outlining far-reaching US ambitions and a commitment to maintain a military presence in Syria, came as the United States has been huddling with US allies in recent weeks about how to bolster stalled UN-backed Syria political talks in Geneva, and how to handle Russian plans to host a Syria national dialogue in Sochi later this month or in February.

Acting Assistant Secretary of Near East Affairs David Satterfield hosted his counterparts from the United Kingdom, France, Jordan and Saudi Arabia late last week to discuss Sochi and what the position of like-minded countries, or "Friends of Syria," should be, diplomatic and Syria expert sources said.

The Americans and some European allies have no problem with one Sochi conference, but the Russians are apparently already suggesting a Sochi II to create committees that will meet in Geneva, one source said, adding that the Americans are not accepting this.

The Americans and some like-minded allies “believe Russia wants [to hold] Sochi, and this is leverage for the West to push Russia to give concession in Geneva” by way of more serious engagement by the Syrian regime delegation in Geneva, one regional source said.

Western diplomats said they recognize that the Russians are determined to host the Sochi conference. The thinking is that it is probably better to go along with one round and let it fizzle, and try to get more Russian commitment to push the regime to negotiate seriously in Geneva than to boycott Sochi altogether.

“Putin has said Sochi must happen,” one Western diplomat, speaking not for attribution, said. “Better to get it out of the way and fizzle than have to endlessly dominate the dialogue.”

UN Syria envoy Staffan de Mistura issued an invitation today for the Syrian regime and opposition to come to Vienna on Jan. 25-26, the UN said.

Meanwhile, Lavrov is due to attend meetings in New York on Thursday and Friday.

Tillerson and his Russian counterpart will meet in New York on Friday; next week, de Mistura will host a meeting of the Syria government and opposition delegations in Vienna on Jan. 25-26. Russia’s Sochi conference is likely to be held Jan. 30, the diplomatic source said.

"The Trump administration speaks a great game on Syria policy, but frankly, we haven’t seen any real indication that we’d be willing to do what it would actually take to achieve the substantial goals we’ve set for ourselves," Charles Lister, a Syria expert at the Middle East Institute, told Al-Monitor.

"The Trump administration is absolutely right to emphasize the need to deal with the root cause of the crisis — the Assad regime — but 2,000 troops, a proxy force confined to one rural corner of the country which is deeply vulnerable to internal and external attack as well as a shaky de-escalation deal in another corner of the country doesn’t look like anything near the kind of leverage needed to achieve political change in Damascus," Lister said. "Therefore, this is just another version of the Obama administration’s Syria policy: setting grand objectives but committing a shadow of the resources necessary to achieve them. Only time will tell whether this time around there is a plan to put more skin in the game, but I haven’t seen any indication of that until now."