Washington ramps up diplomatic efforts to stave off Idlib operation

The new US Syria diplomatic team ramps up diplomacy as it tries to bolster Turkish and European efforts to avert assault on Idlib. 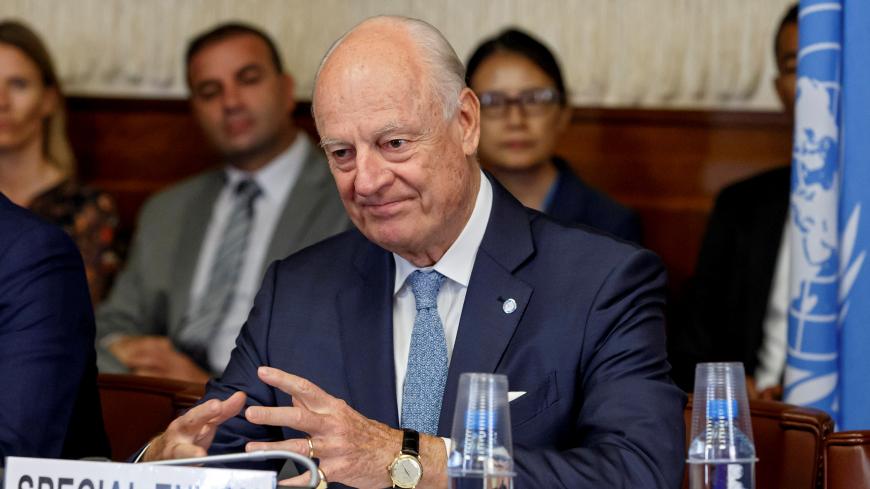 UN special envoy for Syria Staffan de Mistura attends a meeting during consultations on Syria at the European headquarters of the United Nations in Geneva, Switzerland, Sept. 11, 2018. - Salvatore Di Nolfi/Pool via REUTERS

Jeffrey and Rayburn "traveled to Geneva this week," a State Department official, speaking not for attribution, told Al-Monitor. “They will engage with like-minded countries regarding the situation in Idlib, reaffirm our position that any military offensive would be a reckless escalation of the conflict and push for progress in the Geneva process under [UN Security Council Resolution] 2254.”

Jeffrey, in meetings with diplomats and journalists since his appointment last month, has emphasized that the United States is ramping up its diplomatic engagement on Syria and maintaining its troop presence in Syria for now, both to prevent the return of the so-called Islamic State (IS), and ultimately to press for the departure of Iranian forces from Syria. He has also stressed that the stance has the support of both Pompeo and President Trump, who previously said he wanted to bring US troops home from Syria.

“The president made clear to [Russian] President [Vladimir] Putin that the United States is determined to maintain a presence in Syria in order to ensure the enduring defeat of [IS] and is committed to the strategic goal of diminishing and ultimately seeing an end to Iranian forces and proxies in Syria,” Jeffrey told a small group of journalists at the State Department on Sept. 6. “So that means that we're not in a hurry to pull out.”

Jeffrey also pushed back on the inevitability of an imminent Russian-backed Syrian assault to retake Idlib.

“I think the last chapter of the Idlib story has not yet been written because the Turks are trying to find a way out,” said Jeffrey, who previously served as the US ambassador to Turkey. “The Turks have shown a great deal of resistance to an attack.”

Turkish President Recep Tayyip Erdogan is due to meet Putin in Sochi on Monday to try to work out a compromise to avert an all-out assault on Idlib, which has some 3 million civilians, many of whom have fled other parts of Syria. Senior Turkish, French, German and Russian officials also met in Istanbul today to discuss the situation.

“We are making an effort for a cease-fire in Idlib,” Turkish Foreign Minister Mevlut Cavusoglu said on a visit to Pakistan today.

Both Turkey and Europe are anxious to prevent an all-out assault on Idlib that could send a new wave of refugees to their countries, as well as foreign fighters who could carry out terrorist attacks.

Idlib is an “existential” issue for us, said one European official, speaking not for attribution.

The flurry of diplomatic consultations and new US pressure could help buy time for the Turks to try to separate al-Qaeda-linked jihadi fighters from the rest of the population in Idlib.

“President Bashar al-Assad of Syria must not recklessly attack Idlib Province,” Trump wrote on Twitter on Sept. 3. “The Russians and Iranians would be making a grave humanitarian mistake to take part in this potential human tragedy. Hundreds of thousands of people could be killed. Don’t let that happen!”

US officials have warned against a “reckless escalation” in Idlib, without committing to the use of US military force, except in the case of chemical weapons use, said Sam Heller, Syria analyst at the International Crisis Group.

The main message from Trump’s new Syria diplomatic team seems to be, “the US is not exiting Syria in the near future,” Heller said. “But … even that is a return to the stated strategy from earlier this year. They talk about a more energetic and motivated diplomatic effort. But I don’t think that is necessarily the input that was missing in Syria’s political process, for it to work.”

“When it comes to Geneva, the problem is not a lack of US enthusiasm or will,” Heller said. “You can do Geneva more forcefully but that won’t obviously give you a different outcome. I think that is unlikely. To date the Syrian government has been unwilling to decapitate itself or agree to its remodeling under international auspices in Geneva.”

“The main ask is an end to an Iranian strategic military presence,” Heller said. “That is a demand they have in common with the Netanyahu government and Israel and which I think the Israelis have pushed for in similar terms.”

Bassam Barabandi, a former Syrian diplomat now with the Syrian opposition, agreed that the new Trump commitment on Syria is focused on Iran.

The new US Syria team’s “message is strong: We are here, we are not in a hurry to leave,” Barabandi told Al-Monitor. “But still, we should not misunderstand, the target is Iran.”