A southwest Syria de-escalation deal heralded by the Donald Trump administration as an example of successful US-Russian cooperation is unraveling as the US and Russian leaders prepare to meet. 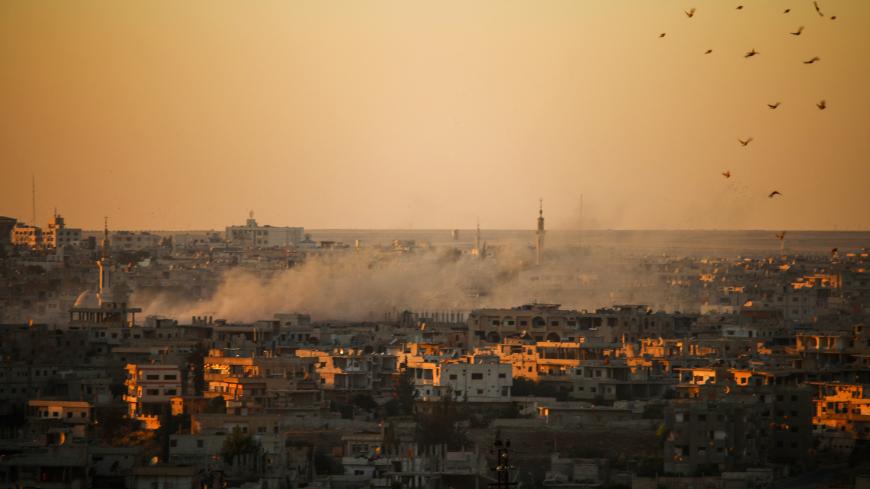 WASHINGTON — As US President Donald Trump and Russian President Vladimir Putin tentatively prepare to meet next month, one of the few tangible successes of US-Russian cooperation since Trump came into office is on the verge of collapse. Syrian army forces, backed by Russian airstrikes, have been advancing against rebels in the southern Syrian city of Daraa, in violation of a southwest Syria de-escalation zone agreement that was negotiated by the United States, Russia and Jordan last year, and heralded until recently by the Trump administration as a major success.

While the State Department has repeatedly expressed deep concern over the escalation and called on Russia and the Syrian regime to honor the cease-fire, the Syrian military operation has advanced over the last week, causing some 45,000 people to flee, according to UN estimates.

On June 19, the US Embassy in Amman, Jordan, sent a stark message to rebels in southern Syria, telling them essentially that the United States would not use military force to protect them from the Russian-backed Syrian regime advance.

“We in the US government understand the difficult conditions you are now facing, and we are still advising the Russians and the Syrian regime not to take any military action that violates the de-escalation zone in Syria’s southwest,” the June 19 message from the US Embassy in Amman to the southern rebels said. (A State Department official confirmed to Al-Monitor that this was an authentic message. A Syrian opposition source said the message was posted by the US Embassy in Amman to recipients on its WhatsApp group.)

“But we need to clarify our position,” the US Embassy Amman message continued. “We understand you need to make your decision based on your interests and the interests of your families and faction, as you see them. You should not base your decision on the assumption or expectation of military intervention by us.”

“This decision is in your hands alone,” it concluded.

The State Department said it has repeatedly protested the violations of the cease-fire deal to Russia, and discussed its concern with other parties, including with Jordan’s King Abdullah, who met with Trump at the White House on Monday.

“We are concerned by developments in southwest Syria, particularly the intensification of Russian airstrikes and pro-regime ground attacks that are clear violations of the cease-fire, and are closely following the situation,” a State Department official, speaking not for attribution, told Al-Monitor on Tuesday. “The president and King Abdullah of Jordan discussed their concern over these attacks yesterday. We have communicated our protests to parties on the ground, including the Russians.”

“UN Secretary-General [Antonio] Guterres on Friday also expressed his grave concern over the regime’s offensive, the displacement of tens of thousands of civilians, and risk to regional security,” the State Department official said. “He called for an immediate end to the fighting.”

As to whether the US government was essentially telling the southern Syria rebels they are on their own, the State Department official declined to say.

But multiple Syria analysts said the United States is telling the rebels they need to cut a deal with Syrian President Bashar al-Assad.

“It’s pretty clear, what they [the US government] are trying to do is send a message to the rebels that there is an international consensus that they need to cut a deal with Assad, and there is no military solution to their problems,” Nicholas Heras, a Syria analyst at the Center for a New American Security, told Al-Monitor. “It seems pretty clear that they are not going to do anything at this stage to intervene.”

“Look, the US supports the southwest de-escalation agreement. However … US military intervention [to uphold it] was not ever in the cards,” Andrew Tabler, a Syria expert at the Washington Institute for Near East Policy, told Al-Monitor.

“I think the problem is a lot of rebel groups thought they were going to be doing that,” Tabler said.

While “there are different messages originating from different parts of the US government, the message that was sent by the US Embassy Amman to the rebels reflects, to my understanding, the actual US position,” Sam Heller, a Syria analyst based in Beirut with the International Crisis Group, told Al-Monitor.

"The Americans are not seriously engaged in negotiations over the southwest, although they are supporting Jordanian efforts,” Heller said. “Without more involvement from the Americans, there are still lower-level trilateral communications and bilateral talks between the Israelis and the Jordanians with the Russians, but nothing that would give you the same sort of comprehensive, preferential deal."

There is perhaps some bitter irony in the timing of the southwest Syria cease-fire unraveling just as Trump and Putin are planning to meet, likely somewhere in Europe after Trump attends the NATO summit July 11-12. The southwest Syria de-escalation agreement was originally announced as Trump and Putin met on the sidelines of the G-20 summit in Hamburg, Germany, last summer, and Trump administration officials have repeatedly cited it as an example of how the United States and Russia could successfully cooperate on specific issues, such as counterterrorism, despite numerous other major disagreements marring the relationship.

"Some inside the US government had justified their confidence in the de-escalation in terms of the joint personal commitment of Putin and Trump,” Heller said.

But Russia has apparently dismissed repeated Trump administration entreaties to uphold the agreement, even as preparations for a new Trump-Putin summit are underway. New national security adviser John Bolton was expected to travel to Russia this week to prepare for the potential Trump-Putin summit, after stops in London to meet his British, French and German counterparts on Monday, and in Italy on Tuesday.

“Grave concerns were expressed at the ongoing military escalation in southwestern Syria, and calls made for an immediate end to violence,” de Mistura said in a statement following the meeting.

“Substantive exchanges took place on the prospects for progress on the constitutional track, and on continuing diplomatic efforts to promote common ground among international players in support of a political settlement in Syria,” the de Mistura statement continued.

David Satterfield, acting assistant secretary of state for Near Eastern affairs, represented the United States in the June 25 Small Group meeting in Geneva. “We strongly support UN special envoy Staffan de Mistura and his efforts to achieve an end to the conflict in Syria,” the State Department official said.

But almost 18 months into the Trump administration, there is still a sense of uncertainty about who will spearhead Syria diplomacy for the Trump administration. Satterfield, who has served in an acting capacity as the top State Department diplomat on the Middle East since last year, is expected to move on to another assignment in a few weeks. The nominee to succeed him, David Schenker, had his nomination hearing a few weeks ago, but is not yet in place.

In the meantime, several diplomatic and think tank sources said they believed that a top White House official working on Syria, Joel Rayburn — the National Security Council senior director for Iran, Iraq, Syria and Lebanon — would likely leave the administration, although the timing of his departure was unclear. One former US official said he understands that Rayburn is frustrated that the Trump administration is not taking a more forward-leaning stance on Syria in pushing back on Assad and the Iranian forces that support him.

A Western diplomat said it was his understanding that Rayburn — who served under Gen. David Petraeus in Iraq — would leave and would not be replaced, and that the National Security Council under Bolton would be more streamlined.

Rayburn and a National Security Council spokesperson did not respond to queries from Al-Monitor on that, other than to say Rayburn was on leave this week.