Syrian rebels have presented the White House with military options to push back against Bashar al-Assad’s gains in the southwest, Al-Monitor has learned. 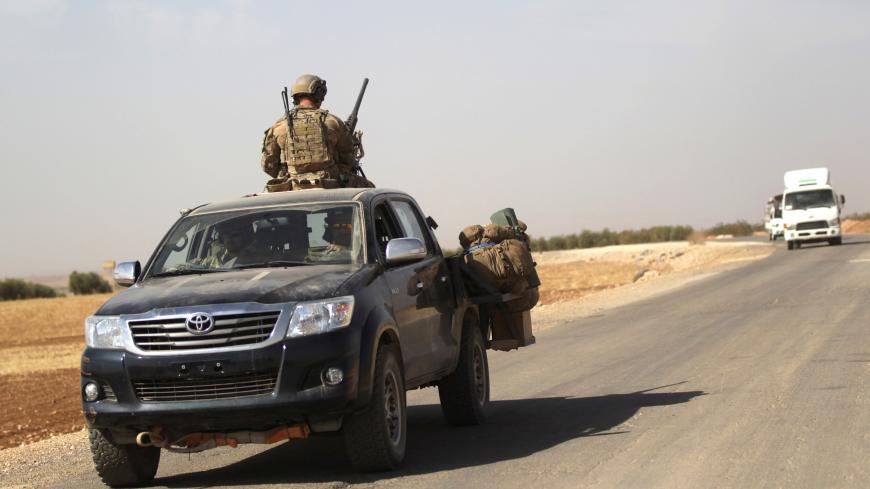 The US military is bracing for a diminished role in Syria as President Donald Trump meets with Vladimir Putin on Monday, days after Bashar al-Assad’s forces raised their flag over the birthplace of the Syrian revolution.

In the lead-up to the leaders’ summit in Helsinki, the State Department’s Near East Affairs Bureau appears ready to give up on a cease-fire zone in southwest Syria that has already been significantly truncated by Assad’s recent victory in Daraa. National security adviser John Bolton, however, is pushing for a more aggressive US posture against Assad ally Iran.

Ever since Trump halted a program to train Syrian rebels to fight pro-Assad forces last summer, the Defense Department has lacked an overt military policy for the wider war beyond the fight against the Islamic State, a source with knowledge of the situation told Al-Monitor.

As internal US sparring over Syria policy has continued without a clear winner, the rebel opposition has withered. Syria’s Southern Front, once a 40,000-strong alliance that tested Assad’s mettle, had shrunk to 15 groups with 8,000-10,000 fighters and remained heavily dependent on foreign support just before pro-regime troops began the drive to wrest Daraa from rebel control.

The city’s fate was all but sealed when officials at the US Embassy in Amman sent a WhatsApp message to rebels in Syria’s southwest telling them not to expect American military help to enforce the cease-fire.

In a last-ditch effort to secure US support, the rebels are making an end run around the Pentagon to provide military options to the Trump team. Al-Monitor has learned that a Southern Front representative shared a list of potential military targets with the Trump administration in the event Assad used chemical weapons in Daraa. It’s not clear how the White House reacted to the document, which was sent to Bolton’s team rather than the Defense Department, which is focused on anti-Islamic State efforts.

The rebels’ proposal seeks to convince the US administration to target Khalkhalah Air Base in the city of Suwayda along the Jordan border in a bid to stop Assad’s escalation in the southwest. The rebels describe the base as the main regime outpost for airstrikes against Daraa.

The proposal also said Iran-backed militias are involved in the offensive, including Lebanon-based Hezbollah, Tehran-organized Afghan groups and the so-called 313 Brigade. Syrian troops have reinforced the base with the elite Tiger Forces unit, brandishing tanks, artillery cannons and rocket launchers, in addition to squadrons of Russian-made MiG-21 and MiG-23 fighter jets, according to the document provided to Al-Monitor.

Events on the ground have moved faster than a possible American military decision to enforce the cease-fire deal inked between the United States, Russia and Jordan to cease the bloodshed in July 2017. US officials say Assad’s current thrust into the area, driven by barrel bombs, artillery and airstrikes, clearly violates the agreement.

The State Department appeared to threaten to use military force to compel Assad’s forces to honor the de-escalation zone in a series of statements. But Secretary of State Mike Pompeo has characterized Iran-backed militias as the main threat to US interests in war-torn Syria, where 2,200 American troops remain involved in a Pentagon-led campaign to liberate former Islamic State strongholds.

In the meantime, Israel has emerged as a major military player for the embattled rebels, shooting down a Syrian regime drone with a Patriot missile as the unmanned craft transited the cease-fire zone this week.

The southern rebels “were banking on the fact that Israel didn’t want the Iranians to go there,” Hassan Hassan, a senior fellow at the Tahrir Institute for Middle East Policy, told Al-Monitor.

Syria’s war is just one of many priorities forming the backdrop for the Trump-Putin meeting, which will also cover Moscow’s alleged interference in the 2016 US presidential election and the ongoing conflict in Ukraine.