US scrambles for Syria deal ahead of Idlib offensive

The Donald Trump administration is pressing Russia for concessions before Bashar al-Assad’s regime finishes taking back the country. 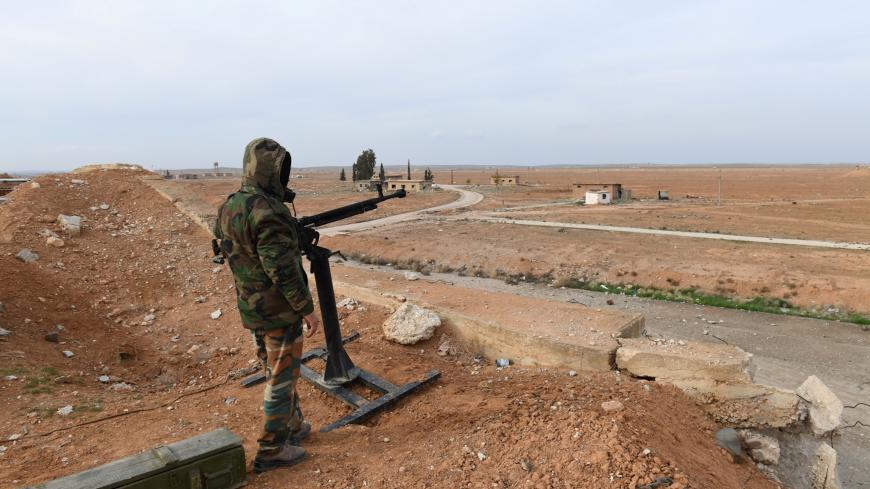 A Syrian army soldier stands next to a military weapon outside the urban area of Idlib, Jan. 21, 2018. The Syrian regime seems poised to retake Idlib, the last remaining rebel bastion. - REUTERS/SANA

The Donald Trump administration is scrambling to get concessions out of Russia on Syria before the Bashar al-Assad regime completes its reconquest of the country, greatly constraining any remaining US leverage.

With Assad’s forces poised to take back the last remaining rebel bastion of Idlib, US officials are in a race to get Moscow to help curtail Iranian influence. Washington is worried that a final Assad victory will give Tehran and its proxies free rein to ferry weapons and supplies through to the Mediterranean Sea, threatening Israel and other US allies.

Publicly, the administration has put the Assad regime on notice against using chemical weapons while relaying to Russia its concerns about a humanitarian catastrophe in Idlib. During a five-hour meeting in Geneva last week, US national security adviser John Bolton pressed his Russian counterpart Nikolay Patrushev on the issue, a National Security Council spokesman told Al-Monitor.

Even as the administration rolled out an expanded Syria team last week to get UN-led peace talks back on track, however, US officials appear increasingly resigned to a bloody battle for the city. A source close to the administration told Al-Monitor on condition of anonymity that the Trump team has already accepted that Assad’s forces are going after Idlib, and that the United States has little capacity — or desire — to stop them.

“I would not see it as a yellow light. It’s a red light. But it’s not a red line,” said Alexander Bick, who was a National Security Council director for Syria under President Barack Obama. “The US opposed the retaking of Aleppo, but we did not send in the Air Force to stop it. The question is whether the US would use force or take steps to prevent a regime assault on Idlib. I think that is unlikely.”

Longtime Syria hawks in Congress are equally skeptical. Asked last week if the United States is basically resigned to the Assad regime taking back Idlib, just as it did Aleppo two years ago, Sen. Lindsey Graham, R-S.C., told Al-Monitor, “It appears so, but it’s a terrible thing.”

In recent days, regional news outlets have reported that Syrian regime forces and their allies have been massing near Idlib for a potential assault, including in nearby Hama and Latakia provinces. Iran’s Fars News Agency has also reported that Russia has sent three large ships to the Mediterranean port of Tartus in anticipation of the offensive.

The United States, France and Britain in turn released a joint statement last week on the five-year anniversary of the deadly gas attack on eastern Ghouta, warning Assad that they were “resolved to act” in case of future chemical weapons use. The statement went on to say the three nations were “gravely concerned over reports of a military offensive by the Syrian regime against civilians and civilian infrastructure in Idlib, and the resulting humanitarian consequences,” but without expressing a similar threat.

Experts aren’t convinced that the Trump administration’s requests of Russia are realistic when it comes to ramping down Iran’s presence. The source close to the administration told Al-Monitor that the United States is asking Russia to get rid of Iranian capabilities and missile systems, and to get Iranian fighters out of the country.

Bolton had told a small gaggle of reporters in Geneva that he and Patrushev had made “considerable progress” on Syria, despite scuttling a joint press statement over disagreements regarding Russia’s alleged interference in the 2016 US presidential election. Bolton himself, however, acknowledged that the United States faced an uphill climb to get Iran’s entrenched troops out of Syria. On Monday, Iran struck a deal with Syria to deepen military cooperation between the two nations, adding to thousands of troops already serving in the war-torn country.

“That would be an objective that I think President [Vladimir] Putin would share,” Bolton said. “It’s far from easy to achieve, and so we talked about a variety of ways it might be accomplished through a series of steps.”

Meanwhile, the State Department’s Syria team will have a critical mandate that’s pertinent to Idlib, experts say: getting Turkey to fortify its small presence of outposts near the rebel-held town to help defeat Islamist militant groups. Idlib is a haven for the al-Qaeda-linked Hayat Tahrir al-Sham, and US officials are worried that an offensive could cause militant groups to scatter across the country while provoking another destabilizing refugee crisis.

“Turkey is the sheriff that’s responsible for eliminating al-Qaeda,” Nick Heras, a Middle East fellow at the Center for a New American Security, told Al-Monitor. “The movement within the Trump administration [is] away from focusing on the needs of Jordan and Israel to the needs of Turkey.”

US and Turkish troops have stood up joint patrols in the contested city of Manbij in northern Syria even after the Trump administration sanctioned top Turkish officials and slapped tariffs on the country for the detention of US pastor Andrew Brunson. But the relationship faces more headwinds as Brunson faces another trial hearing Oct. 12.

Bick, now a research scholar at Johns Hopkins University’s School for International Studies, sees the rift between the United States and Turkey impacting their cooperation on the ground in Syria beyond humanitarian assistance to refugees.

“Under other circumstances we might have coordinated to provide additional assistance to Turkey,” he said. “With current tensions in the bilateral relationship that strikes me as highly unlikely.”