The Pentagon said Monday it is "on time" or ahead of schedule in most areas of setting up a safe zone in Syria after initial patrols with Turkish troops over the weekend, despite lingering questions about the size and depth of the area. 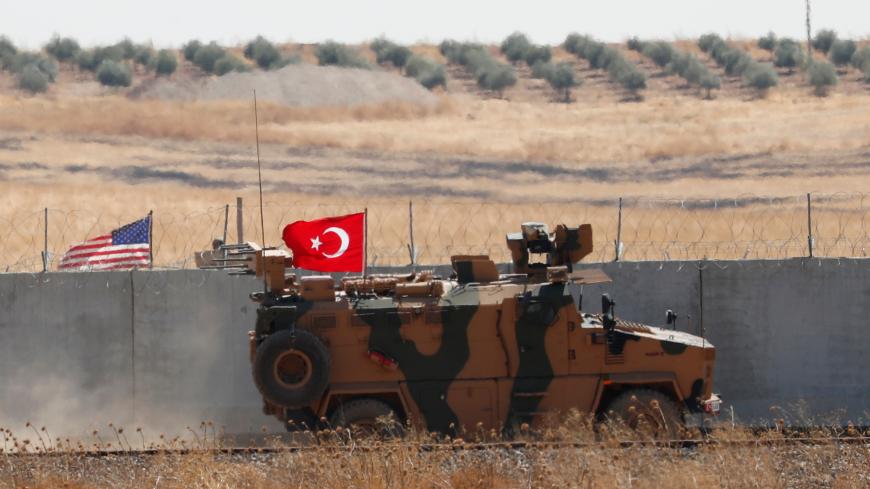 The Pentagon insisted it was ahead of schedule in establishing a so-called "safe zone" Monday after conducting its first joint patrol in Syria’s northeast over the weekend, although the Donald Trump administration remained unclear on critical details about the area that will provide a buffer between Turkey and US-backed Syrian Kurds.

"Coordination and consultation between the US and Turkey are key to addressing Turkey’s legitimate security concerns in the region,” the US Central Command said in a statement Monday. “The US and Turkey are working together to rapidly implement the security mechanism and are on time or ahead of schedule in many areas.”

The statement comes after deputy chiefs from CENTCOM and the US European Command, which oversees American troops in Turkey, met with the Turkish general staff to discuss the safe zone. A Syrian Democratic Forces official told Al-Monitor that Kurdish People’s Protection Units (YPG) pulled back from the border about 5 kilometers and up to 14 kilometers (3 to 9 miles) in some places, ceding the areas to local military councils.

Yet that remains far out of step with what Turkish President Recep Tayyip Erdogan has requested. The military council in Tell Abyad, established in June, is formed by a backbone of YPG forces, which Turkey has singled out for links to the Kurdistan Workers Party, which has waged a low-level insurgency against Ankara for the past 30 years. “The military councils are either YPG members in all but name only,” said Nick Heras, a Syria expert at the Center for a New American Security.

Col. Myles Caggins III, a spokesman for the US-backed coalition to counter the Islamic State, said American allies “observed firsthand progress” on the destruction of YPG fortifications and withdrawals. But experts say the fresh arrangement, which includes a previously announced coordination center, is unlikely to appease Turkey.

“That’s another sticking point in the safe zone negotiation,” said Sara Plana, a researcher specializing in safe zones at the Massachusetts Institute of Technology. “Turkey wants to be the protection force and the administrative force on the ground.”

Safe zones have had a mixed track record over the eight-year Syrian civil war that began as an effort to oust President Bashar al-Assad. Last year, pro-Assad forces advanced through Russia-backed deescalation zones in the Damascus suburbs of eastern Ghouta, where the regime’s use of chemical weapons prompted American-led military strikes, and through the southern province of Daraa on the Israeli border.

The Pentagon has warned Russia to stop bombing civilian areas in rebel-held Idlib, one of the last remaining opposition areas pushing back on Assad. Russia and Turkey signed a 10-point plan in 2018 that included a joint center to implement a cease-fire.

“We have been clear that the offensive in Idlib represents a reckless escalation of the conflict and puts millions of civilians in grave danger,” Cmdr. Rebecca Rebarich, a Pentagon spokeswoman, recently told Al-Monitor.

Yet the US response to safe zone violations has been limited by a small American troop presence, now hovering around 1,000, that is mostly contained to northeast Syria. In Idlib, Moscow controls the surrounding airspace, leaving the United States with limited access to alter the situation on the ground outside of a couple of airstrikes this summer against al-Qaeda affiliates.

But as early as last summer, Al-Monitor reported that the Trump administration was resigned to Assad recapturing the contested province, and ignored calls from Syrian opposition groups to target regime military assets near the Jordanian border as pro-Damascus forces breached the southwest cease-fire.

Antonio Guterres, who is now the UN secretary-general, warned when he was the UN high commissioner for refugees that safe zones — which Turkey has continually called for — would not solve the challenge of refugee outflow from the conflict, a problem that European powers have sought to staunch. Officials who spoke with Al-Monitor over the weekend said there is still no formal agreement on the depth of the zone, despite the initial patrols and the YPG pullback.

The UN said in August that nearly 2 million people are in need of humanitarian assistance in the northeast, as recent fires have devastated fertile wheat and barley crops on land under the control of the Kurdish-dominated Syrian Democratic Forces. Erdogan pledged to resettle 1 million Syrian refugees in northern Syria, threatening to reopen routes for displaced people into Europe if the plan fails.

Experts worry that President Donald Trump’s push to remove most US troops from Syria except for a residual force to man the proposed safe zone and a handful of outposts won’t be enough to protect the indigenous Kurdish population there. Most past security buffers, such as in Libya and Iraq, have included the US Air Force, which is not involved in the Syria zone.

In Bosnia, though the UN sought to protect homes and villages with an international contingent of troops and air power, an undermanned peacekeeping force could do little to stop violations in the zone, leading to the 1995 Srebrenica massacre.

SDF commander Mazlum Kobane told CNN over the weekend that he had asked the United States for additional forces to help man the zone, something that Kurdish allies have continually asked for since Trump's December pullout announcement without success.

At a press briefing Monday, Pentagon spokesman Jonathan Hoffman would not confirm whether the United States had capped the number of troops in Syria at 1,000 — as was previously the case — or whether new American troops had come into the zone.

But the Pentagon and Turkey still seem to be far apart on basic questions about the area, including what to call it. The Defense Department has dubbed the enclave a “security mechanism” and Ankara has insisted it should be called a “safe zone.”

“The goal is that there will be joint efforts within the security mechanism to ensure fortifications and make sure there aren’t weapons in that area,” Hoffman said. He would not confirm whether the patrol that took place over the weekend was the start of routine efforts.