The United States has a “general” deal in place to establish a safe zone in northeastern Syria, the Trump administration’s top Syria policy official said, but the effort will not include European countries. 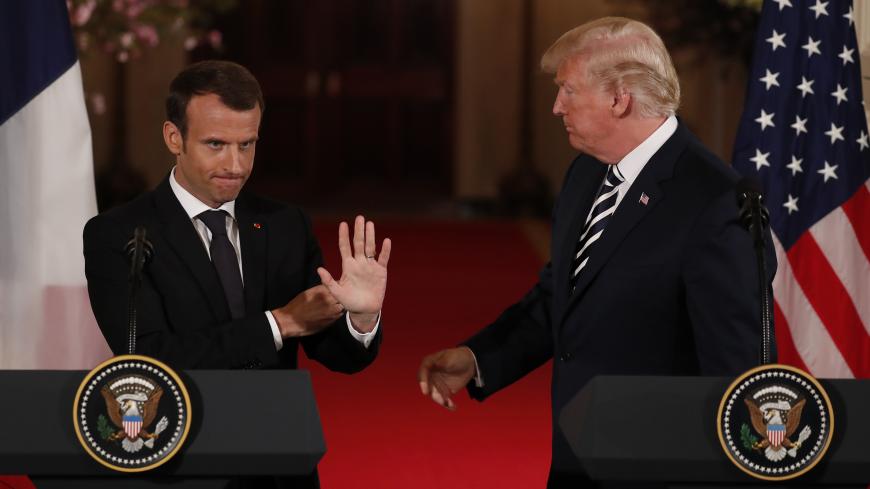 French President Emmanuel Macron waves to someone in the crowd as he and US President Donald Trump conclude their joint news conference in the East Room of the White House in Washington, District of Columbia, US, April 24, 2018. - Reuters/Jonathan Ernst

The United States has a “general” deal in place to establish a safe zone along the Syria-Turkey border, the Donald Trump administration’s top Syria policy official said, but the effort will not include European countries.

Ambassador Jim Jeffrey, the dual-hatted presidential envoy to the anti-Islamic State (IS) coalition and State Department Syria envoy, said that both Turkey and the US-backed Syrian Democratic Forces (SDF) have agreed to pull back Kurdish forces and to establish a safe zone in northeastern Syria. But Jeffrey told Al-Monitor that European allies would not be part of the arrangement.

“No, there’s no agreement, there’s no request, there’s no role for the Europeans in this space,” Jeffrey said. “That is something that was out there in December. It’s not part of any deal. It hasn’t been discussed.”

The revelation comes after the United States tried for months to cajole the United Kingdom and France to put troops into the proposed safe zone. The zone would serve as a buffer between the Syrian Kurdish People’s Protection Units, known as the YPG, and Turkey, which sees the US-backed group as a threat to its national security.

European allies have been tepid about placing fresh troops in the area, clashing with the Trump administration over the ongoing US drawdown from Syria, the end of the counter-IS mission and the White House’s pressure campaign against Iran. The trans-Atlantic rift burst out into the open at the Munich Security Conference in February, when European allies derided the Trump policy as “you’re leaving, we’re staying.” Since then, experts say Jeffrey has tried to manage expectations with Europe.

“He’s just giving voice to reality, which is that many people don’t appreciate that the Europeans have their own political constraints,” said Mona Yacoubian, a former deputy assistant administrator at the US Agency for International Development. “They simply do not have the authority, they are not there to patrol the safe zone between Turkey and the Kurds.”

A former US ambassador to Turkey during the Barack Obama administration, Jeffrey said that several sticking points remained to clinching a deal. These include how much territory the YPG is being asked to give up, dealing with US-provided weapons left over from the counter-IS campaign and clarifying governance in the safe zone.

Turkey has insisted on full control of the zone, with Defense Minister Hulusi Akar calling on the YPG to stay at least 20 miles south of the Turkish border as part of the deal and return Pentagon-supplied heavy weapons, Al-Monitor previously reported. A residual US force would also remain in the northeast, even as American officials said last month that more US troops have left Syria recently.

We continue intensive discussions with Turkey on a security mechanism to address their legitimate security concerns along the Turkey-Syria border.," said Cmdr. Sean Robertson, a Pentagon spokesman. "These are bilateral discussions between the U.S. and Turkey. Our engagements to date have been productive.

Despite Trump’s withdrawal announcement in December, Jeffrey said “there is no pullback timeline” for the anti-IS campaign in the northeast. He added that he hoped US aid workers who left after Trump’s withdrawal announcement in December could soon return. But with talks stalled over a UN-backed political settlement in Syria, experts say that even successful safe zone negotiations may not prove a lasting fix.

"For all the diplomatic bandwidth being tirelessly focused on this 'safe zone' negotiation, ultimately, it is trying to resolve a tactical question" with large humanitarian stakes, said Frances Brown, a former National Security Council director under Obama and Trump. "Even if this is successfully resolved, the essential strategic question remains: To what end?"

In the meantime, a modicum of American support has remained for the reconstruction effort after the IS fight. That effort has been complicated by ethnic tensions, with Syrian Arabs in the recently liberated Middle Euphrates Valley protesting against Kurdish rule in recent weeks.

US funding has helped equip 143 schools and allowed 250,000 children to return to school, a State Department official told Al-Monitor, while helping to restore electricity to 212,000 people in Raqqa and water to the one-time capital of the self-declared IS caliphate. “Current coalition contributions will allow [US government] programming in [northeast] Syria to continue for the coming months,” the official recently told Al-Monitor.

Even with American troops staying on as the safe zone negotiations proceed, experts are concerned that the United States still won’t have enough of a presence to see the action on the ground.

“With top cover and the forces in the area, we can probably deter any move by the regime or the Russians,” Aaron Stein, director of the Middle East program at the Philadelphia-based Foreign Policy Research Institute, told Al-Monitor. “But we can’t physically reach out and touch different SDF elements, so we can’t see everything going on.”

“The main point is we aren’t leaving,” Stein added. “Trump has reversed himself and we have settled into an open-ended deployment without strategy.”