As Kurdish fighters in Syria leave the fight against the Islamic State to defend against Turkey, the United States pauses the battle against the militant group. 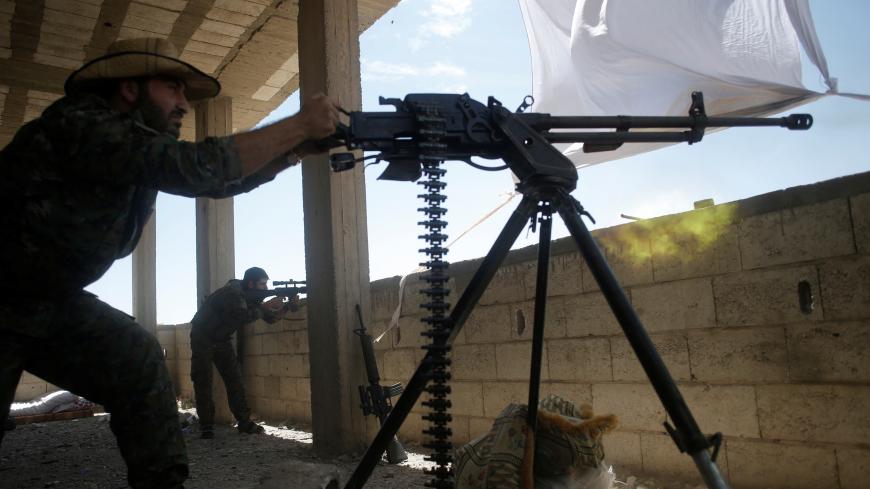 The US-led mission to defeat the Islamic State (IS) in Syria was paused today, a senior administration official told Al-Monitor, as Turkey launched airstrikes deep into northern Syria against American-backed Kurdish forces.

It was not immediately clear whether the fight that includes approximately 1,000 US troops would resume at all, as Kurdish units the United States considers the strongest group of fighters within the Syrian Democratic Forces (SDF) left the IS fight Wednesday to take on Turkey.

The Pentagon relies heavily on the Kurdish People’s Protection Units, known as the YPG, to provide protection to the small contingent of American special operations troops in Syria, including ground escorts and intelligence. The YPG is a major component of the SDF.

US forces were in close communication with the SDF on Wednesday, Pentagon spokesman Cmdr. Sean Robertson told Al-Monitor, after Turkey launched the airstrikes.

But experts said the American-backed force did not appear to be posing a significant threat to Turkey, which rolled out artillery and airstrikes Wednesday using US-made F-16 fighter jets against SDF positions in the Syrian border cities of Tell Abyad and Ras al-Ain.

For example, Aykan Erdemir, a former Turkish parliamentarian now with the conservative Foundation for Defense of Democracies foreign policy think tank in Washington, said, “I would argue that so far the SDF posed no threat to Turkey.”

The Defense Department briefly halted the counter-IS campaign in January 2018 after Turkey launched an invasion of the Syrian city of Afrin that caused a split in Kurdish forces.

Yet the withdrawal of American troops from Syria — even though President Donald Trump first announced the United States would pull out of the fight in December — has shaken the IS fight, the Pentagon’s inspector general reported this summer.

Trump, who is set to host his Turkish counterpart Recep Tayyip Erdogan at the White House in November, insisted in a statement Wednesday that the attack was “a bad idea,” but made no mention of US support to the SDF.

Kurdish units and some Pentagon officials have called the president’s move to abandon the safe zone a “betrayal.” US officials told Al-Monitor earlier this year that talks over a "security mechanism" would help keep the counter-IS mission going, though both sides failed to reach a deal on the depth of the zone.

“Turkey foreclosed any serious cooperation on [IS] even as [40,000] foreign fighters flowed through its territory into Syria,” Brett McGurk, a former special presidential envoy to the counter-IS coalition who resigned in December, tweeted Wednesday. “Our partnership with the SDF was borne of necessity and soon grew to a force of [60,000] Syrians: Arabs, Kurds, Christians.”

A defense official told Al-Monitor that US forces have repositioned out of the former 'security mechanism' area between Tell Abyad and Ras al-Ain.

Even though the White House insisted that Ankara would be forced to administer IS prison camps, Turkey’s incursion drew fierce criticism of the US administration’s policy from lawmakers on both sides of the aisle Wednesday, as Trump ally Sen. Lindsey Graham, R-S.C., has called for sanctions against Ankara for the incursion.

Other top lawmakers warned that the incursion could cause thousands of IS fighters to spill back onto the battlefield.

“We know President Trump’s decision to abandon the Kurds caught our military and diplomats off guard. It strengthened the hand of Erdogan, [Russian President Vladimir] Putin, [Syrian President Bashar al-]Assad, and [Iranian Supreme Leaders Ali] Khamenei," Reed said in a statement. "But we still don’t have a full accounting of why and how the President reached his decision to stand idly by when so many of our national security interests are at risk."

The SDF said on Twitter that a Turkish airstrike had hit one of the prisons.

Meanwhile, on the House side, legislators insisted on getting clarity on US strategy after American forces left the safe zone.

In a letter to Trump signed by dozens of lawmakers, Rep. Jason Crow, D-Colo., an Army veteran who returned from Syria with a bipartisan congressional delegation earlier this week, said the move to take 50 American soldiers out of the safe zone would “have far-reaching diplomatic and national security implications and introduce “uncertainty into US foreign policy that will cause current and future allies to question the reliability of the US as a partner.”

Crow asked the White House for clarification on the American strategy in Syria going forward, including any further changes to the Pentagon’s troop contingent in the war-torn country, what the United States is doing to protect the SDF and what actions Trump might use to “obliterate” Turkey’s economy, as Trump promised in a tweet Monday.

Despite repeated threats, Trump has been reticent to use sanctions against Turkey this year. The US administration has yet to impose mandatory penalties for Ankara taking delivery of the Russian S-400 air defense system in July.