Secretary of State Rex Tillerson will travel to Egypt, Kuwait, Jordan, Lebanon and Turkey next week. But veteran diplomats warn that US goals for Syria need to be scaled back. 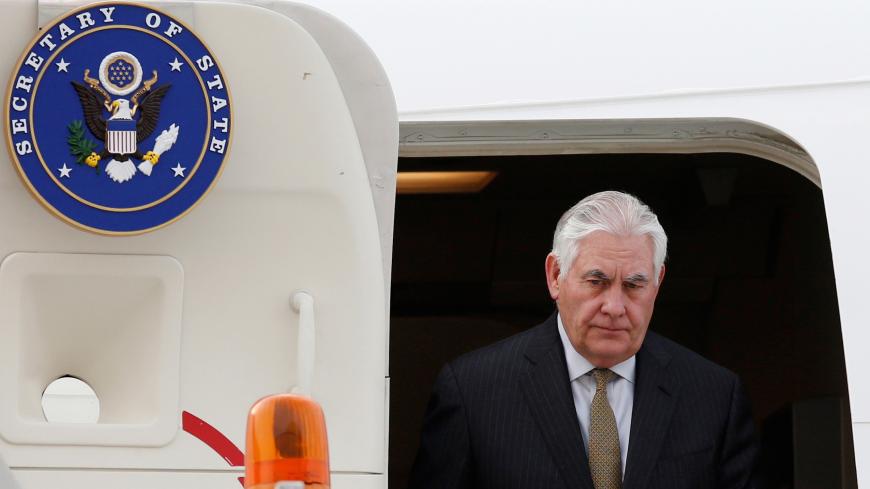 US Secretary of State Rex Tillerson steps off his plane as he arrives at the presidential hangar in Mexico City, Mexico, Feb. 1, 2018. - REUTERS/Henry Romero

WASHINGTON — Secretary of State Rex Tillerson will travel to Egypt, Kuwait, Jordan, Lebanon and Turkey next week, on a trip focused on stabilization and reconstruction after the territorial defeat of the so-called Islamic State (IS), US officials and diplomats tell Al-Monitor.

But as US and coalition partners try to consolidate battlefield gains after uprooting the IS “caliphate” in Iraq and Syria, former US diplomats and experts warn that the vagueness of Washington's goals for post-IS Syria could come to haunt policymakers. They express foreboding that the Donald Trump administration says it intends to keep some 2,000 US troops in eastern Syria until it achieves its broad political goals for Syria. Those goals, as laid out in a speech by Tillerson last month, include not just preventing IS’ return, but countering Iran’s presence in Syria, deterring an Iranian threat to US regional allies, making way for refugees to return and advancing a postwar Syrian political settlement that would see the departure of Bashar al-Assad.

Former US Ambassador to Syria Robert Ford warned that US troops in eastern Syria do not give Washington sufficient leverage to meaningfully dictate the political outcome in Assad-controlled western Syria, where most of the population lives. Meanwhile, US troops and civilian officials working to stabilize eastern Syria could become targets of violence to generate American domestic political opposition to continuing their presence there, he said.

“Having an ill-defined military mission [that] people at home don’t support … I don’t know what the tolerance level is for casualties,” Ford, now a fellow with the Middle East Institute, told Al-Monitor in an interview today. “And the Trump administration will have nothing to show for it. Then pressure will begin to leave.”

“The American conception that we can engage in diplomacy to end a war has to remember that in a war, military operations are a decisive factor in diplomatic leverage,” Ford said. “And if you are going to try to influence the broader civil war, the key theater of operation is western Syria, where the population is. The Americans are in eastern Syria. Hence the Americans have no leverage in the diplomacy to end the broader war.”

After first visiting Cairo, Tillerson will attend two conferences being held in Kuwait on Feb.12-14: the Kuwait International Conference for the Reconstruction of Iraq and the Ministerial Meeting of the Global Coalition to Defeat IS, according to US Ambassador to Kuwait Lawrence Silverman.

“We have won much of the military effort against Daesh, the liberation of virtually all of Iraq and Syria, but we need to win the post-military struggle for an enduring defeat of Daesh and al-Qaeda in the region,” Silverman told a media roundtable Monday, referring to IS by its Arabic acronym.

“I believe we are at an inflection point, a key point to stabilize the gains, ensure that Daesh and al-Qaeda are defeated, and restore normal life,” Silverman said.

After Kuwait, Tillerson will visit Jordan, where he is expected to sign a five-year US aid and assistance memorandum of understanding, Al-Monitor’s Daoud Kuttab said. On Monday, the House Committee on Foreign Affairs advanced the US-Jordan Defense Cooperation Extension Act. Its sponsor, Rep. Ileana Ros-Lehtinen, R-Fla., said the bill’s goal is “to jump-start the kingdom’s private sector as well as help our economy,” Al-Monitor's Bryant Harris reported.

Tillerson will then make a one-day visit to Beirut, Lebanon, on Feb. 15. Acting Assistant Secretary of State for Near East Affairs David Satterfield is already in Lebanon to prepare his visit, the National’s Joyce Karam reported.

Tillerson will then travel to Turkey, where US and Turkish officials are trying to work out multiple disputes, including Turkey’s recent military incursion against US-backed Syrian Democratic Forces in Afrin, Syria, and Ankara's threat to take Manbij.

While Tillerson attends the anti-IS coalition ministerial meeting in Kuwait next week, coalition defense ministers are due to meet in Rome around Feb. 14. Washington will subsequently host a counter-IS coalition meeting for senior law enforcement officials on Feb. 27-28.

Tillerson’s trip comes as Ford and other Syria experts say the United States should scale back its aims in Syria and leverage the interests it has, or risk heartbreak.

“This is how I look at it, [with] my experience working out there in places like Iraq, Syria and Algeria during the civil war in the '90s,” Ford said. “When you put military people in a spot, put some State Department and USAID [US Agency for International Development] civilians in a spot, bad guys will notice and eventually those military personnel and civilians will be targets.”

“You can practice good force protection … but they will become targets eventually and then there will be a question after we start to have casualties, how long are you going to want to stay there,” Ford said.

After the bombing of the Marine barracks in Beirut in 1982, President Ronald Reagan ordered the immediate withdrawal of US troops, Ford said. After testifying before a House Foreign Affairs subcommittee on Syria on Tuesday, he expressed deep frustration that Congress seems to be asking the same questions about the Syria situation that it was in 2011 and is still unaware how much the situation on the ground has changed and been decided by military gains favoring Assad. He described the UN-facilitated Geneva process as “dead.”

The Trump administration is trying to leverage its current military presence in eastern Syria and its control of vital Syrian oil fields to bolster its position in helping advance a Syria political solution, said military analyst Nicholas Heras.

“The way I view the Trump strategy in Syria … [and] what they tried to do with Tillerson’s speech, is to lay out a grand vision and to signal the actual end state they are looking for,” Heras, with the Center for a New American Security, told Al-Monitor in an interview today.

“What we see right now in terms of US posture in Syria is really meant to target the interim stability phase; to utilize the US presence where it is located now as a way to demonstrate the US resolve and commitment to the Syria conflict, and to also send a broader signal to the Assad alliance, particularly to Iran and Russia, that the US is invested in Syria. The US realizes it has a position and stake in the future of Syria. And has a say in how that future is developed.”

While many analysts were concerned about what seemed the vague definitions of expressed US goals for Syria, including what it means to diminish the Iranian presence there, Heras suggested it was intentional.

“I think the Trump team is being purposely vague when it comes to [what it means to] ‘diminish Iran’ at this point because it wants to maintain operational flexibility,” Heras said.

But Ford said using US troops in eastern Syria to demonstrate US “resolve” is not going to work. And he said US and Western threats to withhold reconstruction assistance for areas of Syria under the control of Assad are not likely to sway him to make meaningful political concessions.

“Assad has never made a concession of any substance in seven years, including to the Kurds,” Ford said. “The Iranians and the Russians have a vital national interest in making sure the Syrian government does not collapse economically. I have seen them repeatedly, not happily, but repeatedly, provide loans and commodity assistance. And Assad knows that.”