Geneva II not the only game in town on Syria

The real negotiations, including among Syrian parties and their backers, are taking place away from the media. 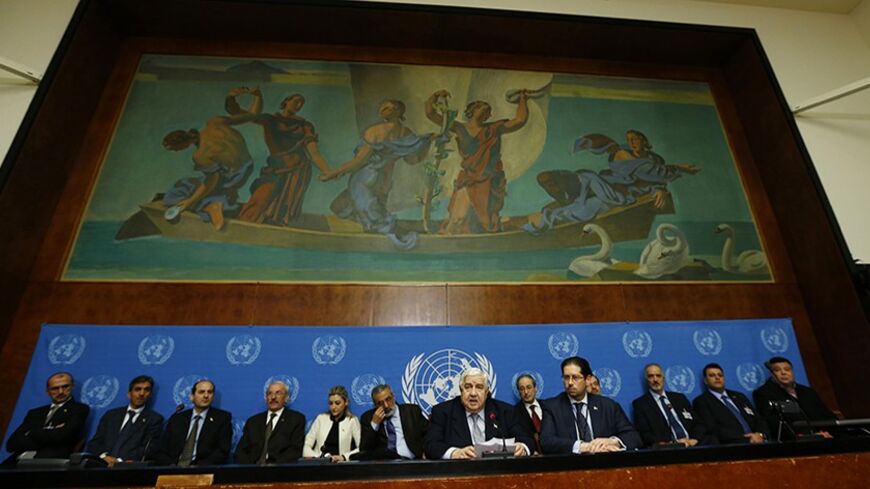 The Geneva conference has ended, but no one is packing their bags. Americans are said to be preparing for the long haul, signing leases on homes — one of many indications that Geneva I and Geneva II are struggling to give birth to a “Geneva process” that will chart a path to peace in Syria.

Geneva II was a magnet for international attention. Reporters, pretenders of all sorts, self-appointed experts and high-priced media advisers are all players in the game, not to mention the stars of the show, ministers and official representatives from all sides.

It is easy and seductive to focus attention on these scripted encounters, which admittedly do make for some riveting political theater. Like the game of Three Card Monte, however, the political circus that is Geneva is all but unwinnable. The serious action is taking place behind the scenes — almost anywhere besides where the cameras are focused.

As noted in Al-Monitor's Week in Review, the crisis is deepening and the threat to US interests is becoming more palpable. Informed observers note that the key players in diplomacy were indeed in Geneva — they just were not in public view. Western officials, ambassadors and trusted security emissaries of Syrian President Bashar al-Assad are the key players in this backstage drama, rather than the formal delegations of any Syrian party. Syrian diplomats, including veteran Foreign Minister Walid Moallem, always play according to a script written by anonymous, powerful members of the security agencies. And the “official” opposition groups — whose natural environment is the bully pulpit, not the hushed encounters in closed rooms where diplomats tame the guns on the battlefield — are not part of this back story at all.

The heart-tugging story of Geneva was the predictable, short-circuited effort to win Syrian agreement to mitigate the humanitarian disaster in Homs. But Geneva is not built to deliver these goods. For months, the key to whatever progress is possible has been occurring way below the radar screen — local understandings between commanders, or public employees enabling local humanitarian relief or the provision of vital services. These are one-off transactions, often implemented without explicit agreement or even supervision. They are nontransparent, unwritten and informal — and all but impossible for outsiders to navigate. But such methods are nonetheless typical of how things get done. So, for example, the first success in provisioning those under state siege in Syria's Yarmouk refugee camp was achieved even as the delegates were jousting without consequence over Homs.

By themselves, such "successes," however important, will not chart a diplomatic course to end the fighting. But they do represent fragile evidence that common ground can still be found among Syrians and mobilized to make tangible, albeit limited, achievements.

The hole that Syrians are digging for themselves, however, is getting deeper by the day. Abdullah Dardari, a former top Syrian economic official now working for the UN in Beirut, told a Washington audience on Jan. 31 that Syria, in the “best case,” has lost a decade of economic development, a loss that he insists is retrievable. Others are far more pessimistic about the injury that Syria has suffered and the generations it will take to bring the country’s economy back to where it was three years ago.

Syrians, Dardari believes, cannot wait for the “day after” to begin rebuilding, not just the bricks and mortar that have been destroyed, but more importantly the country’s fractured ability to act for the common good. Even as the killing continues, it is vital to broaden the “common space” — support for Syria’s territorial integrity and civil society, a phased end or reduction in armed activity, and an agreed transition to consensual governing structures, consistent with the efforts led by UN and Arab League mediator Lakhdar Brahimi.

US Secretary of State John Kerry himself said, in a Jan. 23 interview in Davos with Al-Arabiya, “Everybody is prepared to protect the Alawite[s]. Everybody is prepared to protect the institutions of the state of Syria. Nobody is talking about destroying the institutions. People want the government to be whole. They want the capacity of Syria to stay whole and to stay secular and to be pluralistic and to protect all minorities. … [T]he key here is for people to find the personalities in Syria — and they exist — that everybody respects, people who have government experience, people who have business experience, people who are well known and respected, people who have the ability to be able to look beyond sectarian divisions and be able to heal the wounds of Syria."

Brahimi is said to support such efforts, and the UN has taken a leading role in mobilizing Syrians from across the spectrum in an ongoing dialogue, whose most important achievement is that it is taking place at all.

Brahimi continues to believe, however, that a Syrian version of the Taif Agreement that ended Lebanon’s civil war is the surest route for ending the conflict. Saudi Arabia and Iran are critical to this endgame. But Syrians, so adept at collaborating in their country’s destruction, must even now begin to work together for its reconstruction.