In her first interview since confirmation as Assistant Secretary of State for Near Eastern Affairs, Anne Patterson tells Al-Monitor that it’s too soon to judge the Geneva II talks, that a breakthrough on Iran or Israeli-Palestinian peace could have profound implications and that US officials are daily reassuring Saudi Arabia about the US-Saudi relationship. 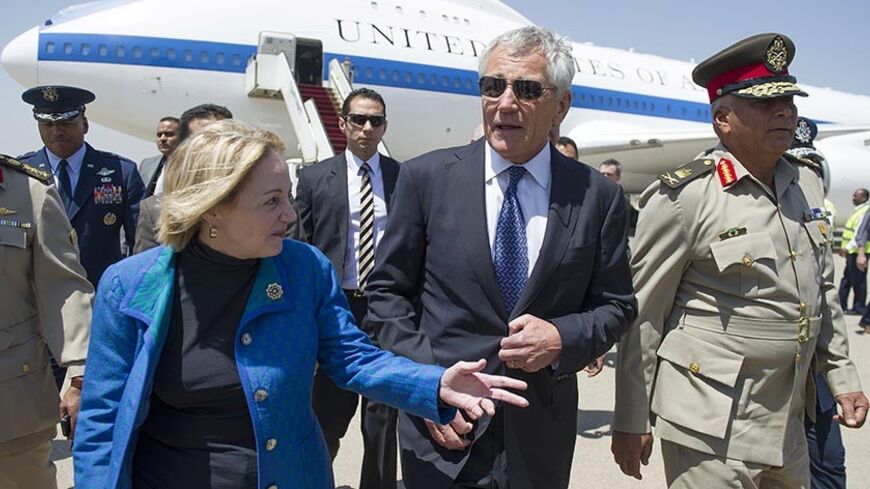 US Defense Secretary Chuck Hagel (C) speaks with then-US Ambassador to Egypt Anne Patterson and an Egyptian General upon his arrival in Cairo, April 24, 2013. - REUTERS/Jim Watson

The new assistant secretary of state for Near Eastern Affairs, Anne Patterson, says her area of responsibility “looks like a mess” but that breakthroughs on Iran or the Israeli-Palestinian peace process would “change the chessboard” and “create a much better situation” throughout the region.

In her first interview since she was confirmed in her new post this month, Patterson, a plainspoken former ambassador to Egypt, Pakistan, El Salvador and Colombia whose voice retains an Arkansas twang after four decades in the Foreign Service, said “no one expected” quick results from the Geneva II talks on Syria and that UN special envoy Lakhdar Brahimi should be given more time.

Besides dealing with the Syrian civil war, Patterson said her top priorities are Iran and North Africa, especially Libya, and that she will also focus on promoting trade and economic development in countries such as Egypt to address the root causes of instability in nations undergoing political upheaval.

Al-Monitor:  The Geneva II conference on Syria doesn’t seem to have achieved very much.

Patterson:  It’s only five days into it today. It’s supposed to go a week on, a week off and then come back to Geneva. … Let’s give Brahimi some credit. He’s a very experienced senior diplomat and let’s see what he can do. No one expected results at first. The opposition got there more unified than we thought and the Turks and the Qataris pulled them together.

Al-Monitor:  But do they really speak for the people in Syria?

Patterson:  We’ll see. They need to expand the scope of their reach in their delegation. [But their remarks to the conference] were well-received. [Compared to Syrian Foreign Minister Walid Moallem], the opposition looked like a model of restraint.

Al-Monitor:  Were you surprised by the kerfuffle over whether Iran would attend Geneva II? Why was Iran expected to endorse the principles of Geneva I when the [President Bashar al-] Assad government hasn’t?

Patterson:  Ostensibly, [the Syrian government] said they had agreed [to the ground rules] for Geneva II by the acceptance of the invitation [from UN Secretary General Ban Ki-moon]. … It was our expectation that Iran would come out with a public statement endorsing Geneva I. It’s always been our position that if Iran would endorse the provisions of Geneva I, they should come like everybody else.

Al-Monitor:  But the opposition said they wouldn’t come if the Iranians did.

Al-Monitor:  The Syrian foreign minister, when he was in Moscow on Jan. 17, proposed a cease-fire in Aleppo. Of course, we haven’t even gotten a humanitarian cease-fire for Homs.

Patterson:  Some of these so-called cease-fires were not really cease-fires. The Aleppo case was one in which they wanted all the fighters to leave, so surrender maybe instead of cease-fire. Like the offer on Homs, they want the women and children to leave, but then a record of all the military-age males. So it’s more a counterinsurgency policy than a humanitarian policy.

Al-Monitor:  What is the US position on regional countries sending foreign fighters into Syria?

Patterson:  We try to discourage that.

Al-Monitor:  In the old days, the Iranians and the Saudis used to talk to each other and resolve issues. Now, this is a missing piece.

Patterson:  It goes back 20 years [to Lebanon]. This is a missing piece. And so the proxy war has gotten a lot worse and you see it all over now in frankly scary dimensions. But it wasn’t that long ago when they had some kind of relationship. … They never liked each other, but they weren’t at this level of animosity.

Al-Monitor:  Have we encouraged any contacts between the Saudis and the Iranians on Syria? Also, do you believe the Saudis would really carry out their threats to seek some sort of alternative to their historic alliance with the United States?

Patterson:  [On the first question,] I don’t know. [On the second,] we have a close strategic relationship with Saudi Arabia. [Secretary of State John Kerry] has made a huge effort [to reassure the Saudis]. He’s been out there twice; he’s had a long meeting with the king; there’s been an extraordinary effort to explain our policies to them and to engage with them. And there’s not a day that goes by that somebody in this building is not talking to the [Saudi] ambassador or [Foreign Minister] Prince Saud and the UAE, too.

Al-Monitor:  Let’s turn to Egypt. General, now Field Marshal [Abdel Fattah] al-Sisi seems on his way to becoming Egypt’s next president. How would you characterize our relationship with him and the Egyptian government at this point?

Patterson:  Personal relationships with him have been good — certainly with ambassadors, including me and with [Defense] Secretary [Chuck] Hagel and with Secretary Kerry and a lot of people on the Hill. But it’s certainly no secret that we’re concerned about freedom of the press, freedom of association, all the fundamentals that are being thrown into question right now in Egypt, not to mention the huge economic issues.

Al-Monitor:  Where do we stand in terms of aid?

Patterson:  Basically, we suspended the delivery of certain major systems like F-16s and Apaches. That’s under review. But we do want the flexibility to move forward with assistance packages should we decide to do so, and we now have that flexibility thanks to our Congress.

Al-Monitor:  For some aid, you have to make a certification that Egypt is moving toward democracy. How can you do that, given the repression going on there now? Will the mere fact that they have elections … be sufficient?

Patterson:  There are various sorts of criteria; the assistance is tranched. … A lot depends on the nature of the elections and the environment in which they are held.

Al-Monitor:  There have been some incredibly anti-American statements lately in Egypt. [Former parliament member and current Al-Osboa editor] Mustafa Bakri openly called last week for attacks against Americans. What are we doing to counter this?

Patterson:  We complain to the government. Mr. Bakri did sort of back off that statement. But now there has been a rash of hugely anti-American stuff in the press. This ebbs and flows, … [but] it’s really a quite dangerous game, because you fan up public opinion and then you’re hostage to public opinion.

Al-Monitor:  You have said you want to focus on the economy and provide less aid, more trade.

Patterson:  We’re going to … focus more on economic issues because the genesis of many of these problems is economic. It’s essentially demographics plus unemployment plus extremely poor education.

We have this hugely successful program called the Qualifying Industrial Zones and it’s small, but it’s been quite effective at job creation — 300,000 jobs and a billion dollars in exports. I certainly hope that that program can be expanded because the key here is job creation in a lot of these countries. But there are a lot of other things we could do in the trade area. Morocco got a free-trade area in 2004.

Al-Monitor:  You mentioned Libya. What can we do there, given the unstable situation and all these militias running around?

Patterson:  We’re trying to come up with some programs to improve governance, but the first priority is security. … There will be training [of 5,000-8,000 Libyan soldiers] in Bulgaria, and then the Italians and the Brits and others are going to share the efforts.

Al-Monitor:  How do the nuclear negotiations with Iran fit into your priorities for the region?

Patterson:  It’s huge. John Kerry deserves credit because he’s undertaken things that nobody’s undertaken in decades. Middle East peace — it will be hugely transformational. … He’s done the Syrian chemical weapons … and that’s not nothing, because it kills the most Syrians and it was the biggest threat to Syria’s neighbors. And then you get Iran. Since 1979, this has been an issue, and if moving past the nuclear issue, he can transform that, that’s hugely significant. So you’ve moved these big issues off the plate and then you have a lot of localized little problems. … If you can lift all this stuff off of it, you have a much better situation throughout the region. And the Libya thing is not dissimilar because all that weaponry has flowed across North Africa … and been hugely destabilizing. So if some grip can be gotten on the Libya situation, that would help, too.

It’s like 1979. The Arab Spring has changed the situation entirely in the region all at once. … It looks like a mess … but if some of this can be successful, … it will change the chessboard. … So let’s hold out hope that some of this will work.

Al-Monitor:  You’ve had some very tough assignments — Pakistan, El Salvador, Egypt, assistant secretary for International Narcotics and Law Enforcement — so-called Drugs and Thugs. What drew you to the Foreign Service?

Patterson:  When I graduated from college, my mother saw an ad in a magazine. It said the Foreign Service is recruiting women. And she said, "You’re not doing anything, go take this test." So I took the test. I’ve been in it 40 years.

Assistant Secretary of State for Near Eastern Affairs Patterson misspoke when she claimed that chemical weapons "kills the most Syrians." In fact less than 1% of all deaths have been the result of chemical weapons.