US Global Justice Chief Warns Assad: Syria Will Put You on Trial

Syria's president will answer for his crimes, but now isn't the time to refer him to the International Criminal Court, says the head of the State Department’s Office of Global Criminal Justice. In an interview with Barbara Slavin hours after Assad’s brother-in-law and defense minister died in a bomb blast, he said that Syria would try Assad itself. 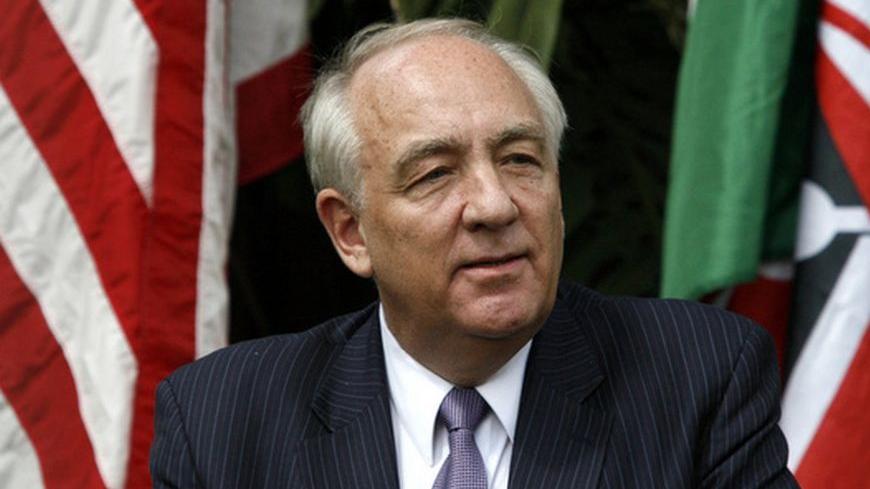 Syrian President Bashar al-Assad will answer “for his crimes to the Syrian people,” but now is not the time to refer him to the International Criminal Court (ICC), says Stephen Rapp, head of the State Department’s Office of Global Criminal Justice. In a wide-ranging interview Wednesday (July 18) with Al-Monitor Washington correspondent Barbara Slavin hours after Assad’s brother-in-law and defense minister died in a bomb blast in Damascus, Rapp, who has long experience prosecuting foreign leaders for ignominious crimes, said the Hague-based court lacks the capacity to investigate Assad adequately and that a new Syrian Justice and Accountability Center would amass the evidence to put the Syrian leader on trial — preferably in his own country after a political transition.

Rapp also said it was not necessary to call the conflict a “civil war” to prosecute Assad and his remaining henchmen, and that such a designation could actually make it harder to build cases because the laws of war give combatants more leeway than human rights treaties signed by the Syrian regime. The US official also warned the Syrian opposition that they could face prosecution if they retaliate against innocent people from Assad’s Alawite sect.

Al-Monitor:  The International Committee of the Red Cross has called this a civil war. Why hasn’t the US government?

Rapp:  Once you’ve said that it’s a civil war, you then say that the rules of international humanitarian law apply … the Geneva conventions, additional protocols and other customary rules that come with them. That makes lots of situations more ambiguous and less protective of civilians.

Al-Monitor:  From the point of view of prosecuting war crimes, don’t you need to call it a civil war?

Rapp:  You can already prosecute crimes against humanity … Getting to that level requires that what is happening there has to be the result of a government or organizational plan or policy … My view would be to look at the reality and say that at least in Homs or Deraa … we have a non-international armed conflict  and in those places, if people commit these crimes … murder, rape … we can charge those as war crimes.

Al-Monitor:  Tell me what your office is doing to lay the groundwork for eventual prosecutions.

Rapp:  It was kicked off  by the Secretary [of State Hillary Clinton] at the Friends of Syria meeting in Istanbul April 1 … It is anticipated that within the next month there will be a meeting with other partners, governments that are going to support it with financial support or by seconding people to work in it … There are 19 governments that have responded in a favorable way …

The [Syria Justice and Accountability Center] itself [to be based in Lyon, France] will be a place where information is received. The first thing you want to do is map the atrocities starting with Deraa [where the uprising broke out in March 2011]: what names, what places, to the extent you can, what units, what actors … This will also have a prosecution unit that will operate like a tribunal prosecution that would really work to develop cases … It’s going to be very important to set up a number of partnerships particularly with people who are just outside Syria or in Syria that can be providing information …

There’s a great volume of information out there that people have collected … Our interest is making sure that we do this in a professional way that protects the sources and builds the skills of the Syrians … to connect the dots to make the kind of case that you have to if you are going to bring a Charles Taylor [the former Liberian president sentenced in May to 50 years in prison by the Special Court for Sierra Leone] to trial.

There’s a tendency to focus on particularly horrific scenes with dead bodies, people being buried and blood on the wall. That’s very important … that’s what we call crime-based [but] you don’t have a case based on crime-based evidence. You have to have a connection between that crime and specific individuals … If you have effective control over a unit and you know what they are doing or have reason to know and you fail to act or punish their conduct, then you’re responsible.

Al-Monitor:  Is Assad guilty of war crimes or crimes against humanity based on what we already know?

Rapp:  He certainly deserves to be investigated.  And given the nature of that system and the hierarchy that he sits on top of, given the level of knowledge that he would have about what’s happening even if all he’s doing is monitoring communications, this is not a situation where there’s a nasty armed group in the DRC [Democratic Republic of the Congo] and there’s a question of who they are answering to. The units that are involved in so many of these situations, the use of heavy weapons, tanks, helicopters, etc. in Sunni neighborhoods are people that are under his command … Just looking at the evidence that’s out there would suggest that he would be a major target [for prosecution].

Al-Monitor:  Would the US like to report Assad to the ICC but for Russian and Chinese opposition on the UN Security Council?

Rapp:  No … From an objective point of view, the facts in the Syrian case would justify international prosecution. The question we face is what’s the most effective way to approach that. We want to end the conflict — the civil war— try to press ahead with a political resolution in the Security Council.

Al-Monitor:  You just called it a civil war.

Rapp:  I stand corrected. End the conflict and the ongoing atrocities … Our preference is always to have accountability issues handled at the national level after a transition. On the other hand, one may come to the point where the Syrian Justice and Accountability Center will strengthen an ICC case once it comes, if it does come, and certainly make for a better transitional-justice type of situation in Syria.

If this were in the ICC today, we would have the usual difficulties. The ICC has fewer than 50 investigators to cover seven — now with Mali, eight — potential ICC cases … They don’t have the resources to go out there and develop much evidence. They won’t have access to the scene … Isn’t it better to develop the evidence, build it up for the day we decide which way to go?

Al-Monitor:  Could not referring him inhibit him from using chemical weapons? Should he be referred if he uses such weapons?

Rapp:  We would hope that he would realize when he commits these crimes, that he is going to face consequences. The longer he goes on and the worse the offenses, the more difficult he is making it for himself.

Al-Monitor:  Does the US support enhancing the mandate of the UN mission in Syria to investigate these crimes?

Rapp:  My sense is that this unarmed mission has a very difficult time getting in and doing this kind of work. It’s dangerous and difficult. We’d like to think it was possible for them to do it but under the current circumstances, it’s less likely now than it was beforehand.

Al-Monitor:  What do you see as Assad’s fate, assuming it’s not the same as that of his brother-in-law and defense minister?

Rapp:  I see him answering for his crimes to the Syrian people, and we’d prefer that to be in a new Syria … in a way that tells the truth and respects the victims and insures that it doesn’t happen again.

Al-Monitor:  Do you think the opposition will face accountability for some of its actions?

Rapp:  That’s certainly the signal we want to send. When I was in Sierra Leone we prosecuted both sides … it’s happened in the former Yugoslavia … Part of the message of this documentation effort … is “there will be justice.” Don’t take it out on the innocent of the same sect … If you target innocent civilians, no matter how righteous the cause, that’s wrong and you will face consequences.