Former US ambassador: There won't be peace in Syria without prosecution of Assad

In Stephen Rapp's first interview since leaving office, the recently resigned US ambassador-at-large and chief of the State Department’s Office of Global Criminal Justice says progress is being made on amassing documentation of the "hell" in Syria. 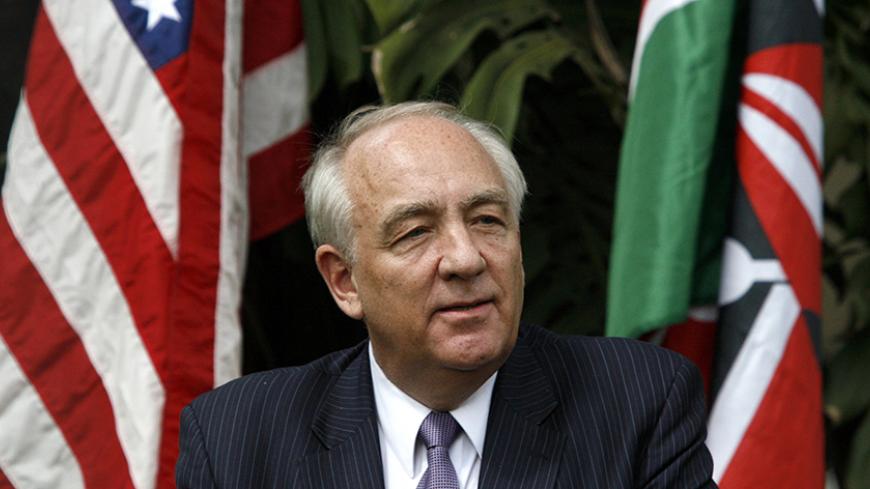 The expression “no justice, no peace” is usually associated these days with US demonstrations against police killings of African-Americans. But it also applies to Syria, according to Stephen Rapp, who has just stepped down as US ambassador-at-large and chief of the State Department’s Office of Global Criminal Justice.

In his first interview since leaving office Aug. 7, Rapp told Al-Monitor that any diplomatic effort to end the civil war in Syria would fail unless accompanied by a process of transitional justice that targets the worst offenders, including Syrian President Bashar al-Assad.

“You can’t even get to peace unless a justice process is developed that’s going to give people confidence that the authors of mass rape and killing are going to be held to account,” Rapp said in the Aug. 11 interview. “Anything else won’t last.”

In the job for six years, Rapp said that “a great deal has been accomplished” in collecting and organizing evidence of crimes in Syria, even though no officials have been prosecuted so far. He pointed to the work of a UN commission whose mandate has repeatedly been renewed, the creation with US support of the Syrian Justice and Accountability Center and work by grantees of that body including the Commission on International Justice and Accountability.

The latter group, headquartered in Brussels but with 135 field workers primarily in southern Turkey, has amassed more than 600,000 documents showing crimes by the Assad regime, he said. Rapp said the only bright spot in the civil war, which has now gone on for more than four years and killed a quarter of a million people and displaced half of Syria’s population, is the way the regime generated so many “documents with stamps on them” that have fallen into the hands of the opposition. Even now, Rapp said, such documentation “can be purchased by the kilogram from one group or another in various parts of the country.”

Rapp was also instrumental in publicizing more than 50,000 photos taken by a Syrian defector code-named Caesar of torture and murder of detainees in military hospitals Mezzeh and Tishreen. Rapp said Caesar, a former police photographer, “didn’t expect the impact the photos had” in dramatizing the abuses of the Syrian government.

The dossier shows the bodies of 11,000 Syrians, many of them with gruesome signs of torture and starvation. Rapp said work is ongoing to identify victims and that so far 600 families have stepped forward to identify relatives.

Frustrated by the Obama administration’s cautious policy toward intervention in the Syrian war, some once-prominent US officials, such as former US Ambassador to Syria Robert Ford, have quit. Rapp said he was not leaving out of protest, noting that he had been in the position longer than usual for such a job and that he intends to continue his involvement by working with “a couple of organizations in Europe and the US on the challenge of accountability where no court has jurisdiction.”

“I never had any proposed talking points or speeches edited in the slightest,” he said of his government tenure. “What I said all the time and kept pushing — and never ran into any resistance — was the need to document the hell.”

Rapp said a successor has already been chosen but would not be announced until Congress returns from its summer recess.

Mohammad Al Abdallah, executive director of the Syria Justice and Accountability Center, praised Rapp for reaching out to Syrian opposition groups, providing technical advice and encouraging President Barack Obama and his administration “to do more than depositing the Caesar photos with the FBI.”

But Abdallah told Al-Monitor that “without a comprehensive policy from the administration” on Syria, Rapp’s contributions were welcome but insufficient.

“The less push for accountability, the more tendency to be violent,” Abdallah said of the Syrian conflict. “People would say that nobody cares.”

US Secretary of State John Kerry, in announcing Rapp’s departure, said in a statement that Rapp “has engaged in tireless outreach and energetic diplomacy — working with foreign governments, civil society, national and international courts, victims and survivors and our partners within the US government and in Congress — that has delivered progress on seemingly intractable challenges and helped lay the groundwork for a more just and peaceful future. Whether it was concluding a successful, yearslong effort to locate long-time fugitives like [Bosnian Gen.] Ratko Mladic and Bosco Ntaganda [a militia leader in the Democratic Republic of Congo and Rwanda] and see them brought to justice, or working to ensure that atrocity crimes in more recent conflicts like Syria are documented for a day when justice can prevail, Stephen brought the tenacity of a former prosecutor and the persistence of a diplomat to his work.”

Fred Hof, a former senior State Department official dealing with Syria who left the Obama administration in 2012 out of frustration at its reluctance to increase support for opposition forces, told Al-Monitor that Rapp “did a superb job of marshaling literally tons of evidence that ultimately may prove very useful in prosecuting Assad and others for war crimes and crimes against humanity. Rapp broke some bureaucratic crockery in 2012 by making criminal accountability a major agenda item in successive Friends of the Syrian People conferences,” added Hof, who is now a senior fellow at the Atlantic Council. “To the best of my knowledge it was largely his own initiative: He did not have to be ordered to do his job. He was aided immeasurably by the habit of the Assad regime to record in writing many of its atrocities and victims and the willingness of decent Syrians to smuggle the incriminating documentation out of the country.”

In a 2012 interview with Al-Monitor, Rapp said, “Our interest is making sure that we do this in a professional way that protects the sources and builds the skills of the Syrians … to connect the dots to make the kind of case that you have to if you are going to bring a Charles Taylor to trial,” in a reference to the former Liberian president sentenced in May 2012 to 50 years in prison by the Special Court for Sierra Leone.

While it may be many years before such a case can be brought against Assad and his top henchmen, Rapp noted that there are other ways to begin to bring some accountability for Syrian victims of both the regime and of opposition forces, including the group that calls itself the Islamic State.

The Syrian Justice and Accountability Center in a recent report wrote, “In Syria in the pre-transition period … criminal prosecutions in foreign national courts can have a positive impact … as long as investigations are not restricted only to opposition figures and counter-terrorism cases.”

So far, Rapp said, the only cases prosecuted involve relative small fry such as a former member of the opposition Free Syrian Army tried in Sweden for crimes against a Syrian soldier. While foreign fighters are “easier to prosecute,” more than 80% of the war crimes committed in Syria have been carried out by the Assad regime, he said.

Rapp conceded that focusing on Assad’s removal could further complicate delicate diplomacy among Russia, Saudi Arabia, Iran and the United States that has intensified in recent weeks about how to organize a transition and better confront IS and other militant Sunni groups. But Rapp insisted that without engineering Assad’s ouster, “It doesn’t work. You can’t get the Sunni community to sign any peace that keeps him in place.”

Asked how long he thought Assad would remain in power, Rapp noted that the Syrian leader now presides over a much-reduced amount of territory and said it was possible that Syria would follow a path similar to what occurred when the former Yugoslavia imploded. One of its components, Bosnia, after a brutal three-year war that included many human rights atrocities, was further split into a Muslim-Croat entity, the Federation of Bosnia and Herzegovina, and a Serbian enclave, Republika Srpska, whose former president, Radovan Karadzic, is now on trial before a special tribunal in The Hague.