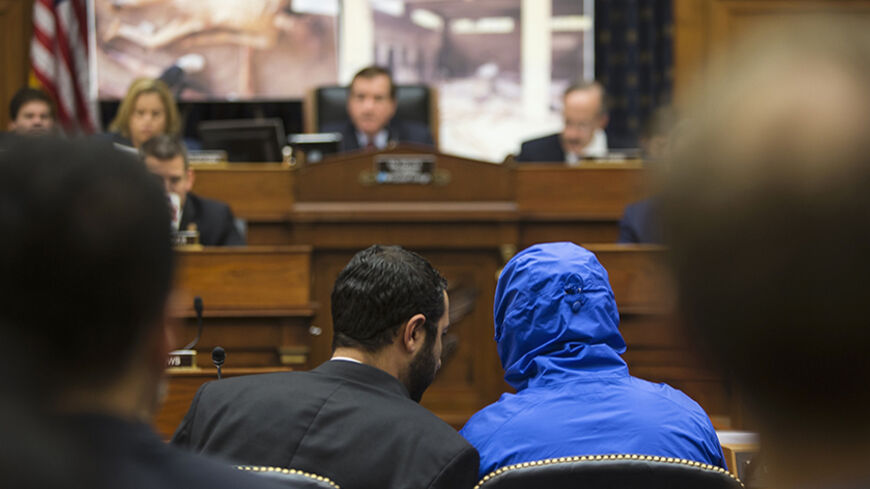 A Syrian army defector known by the protective alias Caesar (disguised in a hooded blue jacket) listens to his interpreter as he prepares to speak to the House Foreign Affairs Committee on Capitol Hill in Washington, July 31, 2014. - REUTERS/Jonathan Ernst

A Syrian army defector’s photos of emaciated and brutalized corpses drew bipartisan calls for greater US involvement during a House hearing on Thursday.

The anonymous military photographer known as “Caesar” appeared before the House Foreign Affairs Committee cloaked in a blue hoodie alongside several advocates of greater US involvement in Syria's 3-year-old civil war. He told lawmakers that 150,000 people remain in Syrian President Bashar al-Assad’s prisons and urged the Obama administration and Congress to do all they can to end the slaughter in Syria.

“Pure and simple, these photos cry out for justice,” said Chairman Ed Royce, R-Calif. Photos of the dead were placed around the room and played on the committee’s TV screens.

“This is happening right now in Syria as we speak,” Engel said, “and we could do more to stop it.”

Caesar, who first appeared in public at a Holocaust Museum event on Monday, told lawmakers that he worked at a military hospital for two years from 2011-13. During that time he smuggled out some 55,000 photos showing 11,000 methodically documented corpses, many bearing signs of torture.

“They were starved to death and their bodies looked like skeletons,” Caesar said through his translator, Mouaz Moustafa of the Syrian American Task Force. “I have never in my life seen pictures of bodies that were subject to such criminality except when I saw pictures of the victims of the Nazi regime.”

US officials say they’ve confirmed that the images were authentic.

“We see very few smoking guns in this business, … but what we found was just that,” said David Crane, the former chief prosecutor of Sierra Leone war crimes who co-wrote the Qatar-commissioned Syrian detainee report based on Caesar’s photos. Crane described the “systematic torture, starvation and execution of what our forensic team was able to verify was approximately 11,000 human beings.”

Egypt-born legal expert Cherif Bassiouni, a longtime advocate for the creation of a UN investigation commission to collect evidence of war crimes, said Assad’s actions “require action to prevent their continuation and recurrence.”

Frederic Hof, a former Syria adviser at the State Department now with the Atlantic Council, put forward his proposal to help build a Syrian national stabilization force composed of regime defectors now in refugee camps. He said proposals to work with Assad to counter the Sunni Islamists who are threatening Baghdad was a nonstarter.

“I think what today’s briefing does is effectively kill the ‘Let’s collaborate with Assad’ thesis,” Hof said. “This briefing illustrates in my view the moral inadmissibility of any American collaboration with that regime.”

“Has that strategy ever worked before? Ever?” he asked.

“I’m not aware of specific examples of that particular strategy ever having worked,” Hof acknowledged. “My sense is that this is the most conservative, creative and constructive way forward over the long term. There are thousands and thousands and thousands of Syrian officers and soldiers who have already been trained who are in refugee camps.”

And Rep. Tulsi Gabbard, D-Hawaii, asked Caesar if reports that the US-supported Free Syrian Army was weak were accurate.

Caesar said Assad’s regime was weaker than the West believes, and that the moderate rebels were “much stronger than they seem.”