The president is under fire for backing off Obama's regime change policy. 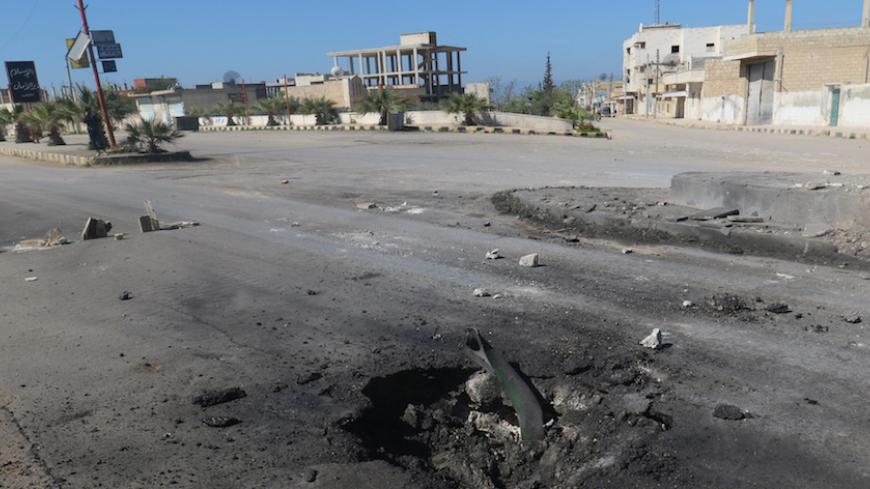 A crater is seen at the site of an airstrike, after what rescue workers described as a suspected gas attack in the town of Khan Sheikhoun in rebel-held Idlib, Syria, April 4, 2017. - REUTERS/Ammar Abdullah

Democrats wasted no time faulting the president for his apparent disinterest in playing an active role in ending the six-year conflict while downplaying the Barack Obama administration's own failures. Several cast the White House as beholden to Moscow amid investigations into Russia's ties to Trump's presidential campaign.

"While President Trump cozies up to [Syrian President Bashar al-] Assad and the Russians, children and civilians have once again been gassed in Syria," House Minority Leader Nancy Pelosi, D-Calif., said in a statement. She went on to demand a "comprehensive" intelligence briefing "as soon as possible."

Senate Minority Whip Dick Durbin, D-Ill., also pointed the finger at Russia because of its responsibility to remove chemical weapons from Syria under a deal reached in 2013 with the Obama administration following a gas attack on the Damascus suburbs.

"History will judge how America responded, and so far, our response has been insufficient — failing to create humanitarian safe zones, shutting the door on Syrian refugees, and now this White House is cozying up to Assad’s No. 1 supporter and enabler: Vladimir Putin," Durbin said in a statement. "President Trump and the UN Security Council must show leadership to address these crimes against humanity that violate the Chemical Weapons Convention and the 2013 agreement brokered by the US and Russia to remove all chemical weapons from Syria."

The top Democrat on the House Foreign Affairs panel, Rep. Eliot Engel of New York, in turn slammed Trump for putting the United States on the "sidelines" when it comes to Syria. Secretary of State Rex Tillerson has declined to call on Assad to step down and skipped recent international peace talks, while refusing to comment on the attack when asked about it during his meeting with Jordanian King Abdullah II at the State Department. Tillerson later issued a statement calling on Iran and Russia to "exercise their influence over the Syrian regime and to guarantee that this sort of horrific attack never happens again.”

Engel, who recently introduced bipartisan legislation to sanction countries that support Assad, said, "Sadly, the Assad regime is likely feeling empowered right now. This week, the administration moved toward appeasing the butcher in Damascus and accepting how Moscow and Tehran have enabled and protected him."

Predictably, Republicans in turn blamed what they portray as six years of dithering under Obama for the current situation.

"These heinous actions by the Bashar Assad regime are a consequence of the past administration’s weakness and irresolution," White House spokesman Sean Spicer said at his April 5 briefing. Spicer said the United States stood with its allies to "condemn this intolerable act," but did not preview any US response. Trump himself later issued a statement saying the attacks were "reprehensible and cannot be ignored by the civilized world."

Meanwhile, House Speaker Paul Ryan, R-Wis., released a brief statement that made no mention of Assad, implicitly deferring to the White House on Syria policy.

"No words can capture the depth of this horror. Nothing can justify the mass murder of innocents, especially children," Ryan said. "We join the Trump administration in condemning this barbaric attack on the Syrian people."

Some Senate Republicans were much more forceful.

"I want to hear him say we're going to arm the Free Syrian Army," McCain told CNN. "We're going to dedicate ourselves to the removal of Bashar al-Assad. We're going to have the Russians pay a price for their engagement. All players here are going to have to pay a penalty and the United States of America is going to be on the side of people who fight for freedom."

Such rhetoric has alarmed groups that fear the United States' getting further dragged into the 6-year-old civil war. Last week, the nonprofit Christian Solidarity International launched a "No Arms for Terrorists" campaign and hired a lobbying firm to further legislation from Sen. Rand Paul, R-Ky., and Rep. Tulsi Gabbard, D-Hawaii, to restrict weapons transfers to Syrian rebels.

"No Arms For Terrorists believes that under no circumstances is giving money and weapons to al-Qaeda and other groups the US government knows to be terrorists and their collaborators a legitimate option or a valid use of Americans' tax dollars," CEO John Eibner said at the time. "This is a particular problem in Syria, where over the past six years of conflict American tax dollars have been used directly, or indirectly via US allies, to arm jihad terror groups in a bid to overthrow a secular, socially pluralistic ruling elite and replace it with a sharia-based Sunni supremacist one."

"The US, along with our European partners, must strongly condemn this moral outrage and demand accountability for Assad’s war crimes," he said in a statement.

"The United States must lead the international community and insist on holding Assad accountable for his war crimes and crimes against humanity," Cardin said. "I hope the administration will clarify its position on Assad. He has no role in a future Syria.”