This year, the Salafist practice of targeting Shiite Ashoura processions in Iraq may spread to Lebanon. 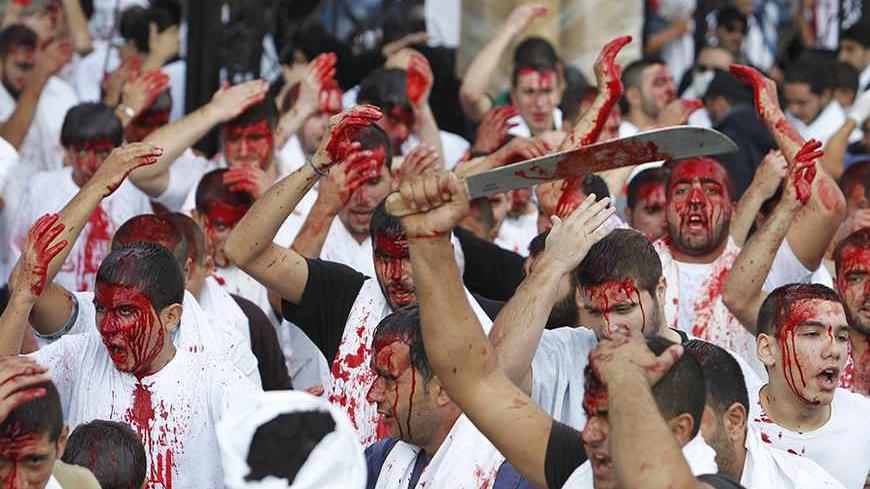 Shiite Muslim men bleed as they gash their foreheads with swords and beat themselves during a ceremony marking Ashoura in Nabatiyeh, southern Lebanon, Nov. 25, 2012. - REUTERS/Sharif Karim

A correspondent in Beirut
November 6, 2013

Each year, during the first 10 days of the month of Muharram — according to the Islamic calendar — Shiite Muslims commemorate the death of Imam Hussein bin Ali, who was the grandson of the Prophet Muhammad, the son of Imam Ali (the husband of the prophet’s daughter) and one of the 12 imams who are held in the highest esteem among Shiites.

Hussein was killed in the year 680, when the army of Yazid bin Muawiya cut off the road that Hussein was on as he was going to Iraq. According to the narrative, Hussein sought to save his grandfather’s religion from the misguided Umayyad rule.

Yazid’s army surrounded Hussein and his family in the central Iraqi city of Karbala for three days. The siege ended with the killing of Hussein and his men and the capture of the women.

Since that date, Shiites have commemorated this event with great fervor, as if it happened yesterday. In principle, there is no deep religious disagreement between Sunnis and Shiites on whether Hussein was treated unjustly and over the validity of his goals. But they do disagree about the significance of Karbala in the subsequent conflict over the legitimacy of the reigning power after the death of the Prophet Muhammad. This disagreement is so deep that it caused a clash between the two sides that still continues to this day.

A means for solace and challenge

This year, Ashoura has a special meaning, especially for Shiites in Lebanon. They will be holding the Ashoura processions, the most prominent part of the occasion, with great fervor and in accordance with the mutual Sunni-Shiite power displays prevailing in the region.

The two sides are fighting in Iraq and Syria over the sectarian identity of these two countries, and this year’s Ashoura represents an ideological fault line between them. During the Ashoura ceremony, Lebanese Shiites will express their defiance against attempts by Sunni Salafist movements to suppress them. Those Salafist movements are playing a major part in the Sunni-Shiite struggle in Syria, Iraq, Lebanon and elsewhere.

By contrast, the Salafists are threatening to derail the occasion with suicide bombings, as they do in Iraq.

The phenomenon of Salafists suppressing Ashoura commemorations first appeared in Iraq after the Sunni-Shiite conflict that erupted there as a result of the US occupation. The occupation has intensified the Saudi-Iranian regional conflict and the conflict over Iraq’s Islamic identity. The Saudis have tried to highlight Sunni Arab identity by supporting the Iraqi Sunni Islamist forces, including Salafists. Iran has supported Shiite forces, including forces that believe in the velayat e-faqih (guardianship of the jurist) led by hard-line leaders in Qom, the guardians of the Islamic Revolution in Iran.

For about 10 years, Shiite and Sunni Iraqis have been exchanging car bombs. This kind of sectarian mass killing flares up during Ashoura, when pro-al-Qaeda Salafist jihadists, in Iraq and in other countries with a Shiite presence, send suicide bombers wearing explosive belts into Shiite Ashoura rallies and blow themselves up. In contrast, Shiite militias have taken extraordinary security measures to prevent Salafist suicide attacks during Ashoura.

This year, fears are growing that Salafists may target Ashoura processions in Lebanon, especially after Hezbollah has started fighting alongside the Syrian regime against the opposition, a large part of which consists of Salafists.

A Lebanese security source, speaking to Al-Monitor on condition of anonymity, said that Hezbollah has been advised to limit Ashoura commemorations. Hezbollah refused this advice and announced that it will accept the security challenge posed by the Salafists toward this occasion, and that this year’s Ashoura will be marked with more excitement than any other year to challenge the Salafists and to showcase the Shiite presence.

The security source added that in the days leading up to the start of Ashoura, several meetings were held between Lebanese security officials and the Amal/Hezbollah Ashoura organizing committees in all regions of Lebanon to coordinate the security measures and prevent the infiltration of Salafist suicide bombers.

Interestingly, on Nov. 4, Hezbollah’s Al-Ahd website published information attributed to newspapers and to Hezbollah sources that more than 8,000 Hezbollah elements were assigned to protect the Ashoura ceremony and that there has been an unprecedented intelligence effort to monitor and catch suicide infiltrators.

A security source inside Hezbollah confirmed to Al-Monitor that Lebanese security and intelligence services have information that extremist Salafist groups may be planning to attack Shiites participating in Ashoura.

The same security source confirmed to Al-Monitor that there is security information that Salafist extremists might even launch suicide attacks against Ashoura processions in Lebanon, as is happening in Iraq.

The Hezbollah source told Al-Monitor that this possibility is real but that the party’s leadership has decided to accept the challenge by calling on Shiites to participate in large numbers in Ashoura, as a show of force and defiance to Salafist threats.

Last year, the Lebanese army uncovered an attempt to blow up an Ashoura gathering in Nabatiyeh, a Shiite town in south Lebanon. Nabatiyeh has a long history with Ashoura, going back to the beginnings of the last century. According to the historical narrative as remembered by the townsfolk, during that period an Iranian doctor came to the town and married a local girl. He was the one who revived the Ashoura tradition there. Since that time, Nabatiyeh has become the center of the Ashoura commemoration in Lebanon. But after Hezbollah’s rise in the 1980s, the party revived Ashoura in all Shiite Lebanese cities, towns and villages.

Hezbollah uses the symbolism of Ashoura to mobilize Lebanese Shiites around the idea of resistance, to encourage them to bear the burden of martyrdom and draw the Shiites toward Iran, which is currently the center of Shiism in the world. According to Shiite tradition, Imam Hussein was a Shiite martyr and a resistance fighter who fought for the sake of justice and freedom and to establish the right of the prophet’s household as his rightful heirs.

In the current Sunni-Shiite strife that extends from Iraq to Lebanon via Syria, Ashoura has become an occasion to showcase Shiite will. In earlier times, few Sunnis considered Ashoura a provocative event.

Today, fewer Sunnis look positively toward Ashoura and more see it as a Shiite way to challenge the Sunnis and highlight the Shiites’ association with the world’s Shiite decision-making capital — Tehran, which is Persian, not Arab.

For their part, the Shiites have become convinced that their fight against Sunni radicals is a continuation of Hussein’s fight to defend "true Islam" and the prophet’s household. Iran and its Shiite Arab allies believe that Hussein’s enemies in Islam are still at work as expressed by Saudi policy and jihadists who today — like in the past — aim to monopolize the rule and accuse the household of Imam Ali and Hussein of being apostates, following their heresy and being shou’oubiyyin (those who seek to destroy Islam from the inside).

In short, the history of the Sunni-Shiite schism in Islam has been reawakened today in the region and in Lebanon in particular. The past thousand years have not resulted in forgetfulness or in reconciliation between Shiites and Sunnis. History is still alive in their collective memories.