The martyrdom of Imam Hussein permeates all aspects of Iranian life. 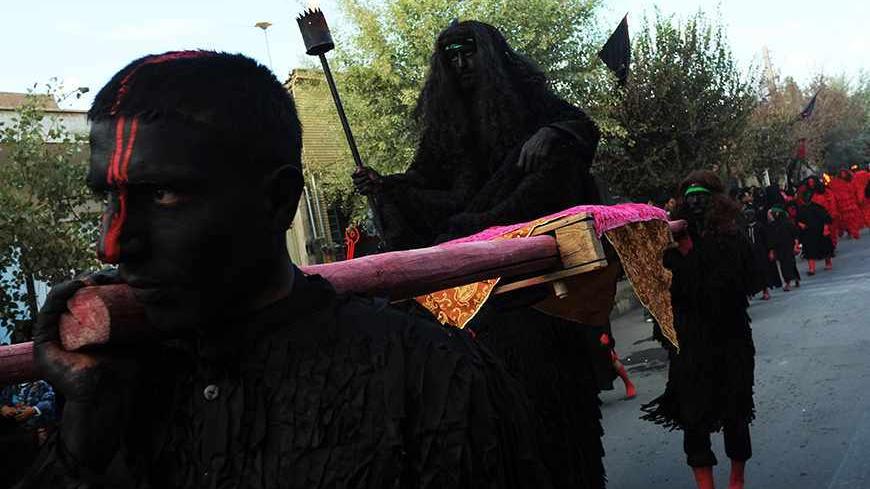 Iranian Shiite Muslims enact the story of the killing of Imam Hussein during the annual religious performance of "Taazieh," Nov. 13, 2013, in Noosh Abad near the central city of Kashan. - GETTY/Majid Saeedi

TEHRAN, Iran — Black are the streets of Iran. Disheartened voices emanating from huge speakers can be heard wherever you go, and large groups of men and women line up in front of mourning centers, tears in their eyes and signs of sadness on their faces. “Is there anyone to help me?” cries the aza, or mourning, reader, quoting Imam Hussein, the Shiites' third imam and the son of Fatima, the daughter of the Prophet Muhammad. “Is there anyone to help the grandson of the holy prophet?” he continues, as cries get louder. These sounds create the soundtrack of Tehran and other Iranian cities during the days of Ashoura.

Despite its religious roots, Ashoura is not just an occasion commemorated by religious people in Iran; it’s a part of the Iranian collective conscience, something that is treated as cultural heritage, like commemorations of Nowruz, the Persian new year. The values of the historic incident behind Ashoura make it relevant to everyone’s thoughts and beliefs in Iran: Who doesn’t want freedom? Who is against the struggle for reform? Who can’t respect sacrifice?

The aza reader says: “My son Sajjad, tell our followers that I died for truth and justice. Sister Zeinab, be patient, and let all know what happened to us.” He continues to read from the story of Imam Hussein, who, along with 72 companions, was killed in the Iraqi city of Karbala in 680 AD at the hands of Caliph Yazid Bin Muawiya's army, after refusing to grant the new caliphate his oath of allegiance.

In each and every street in Tehran there are mourning committees called “azadari.” Some are managed by families and individuals, others by members of Iran’s paramilitary organization, the Basij. Outside the azadari is a kiosk-like wooden structure where tea and food are distributed to passersby and ceremony participants.

“Since I was a small girl my mother used to bring me to the aza,” said Huraa, a university student. “We wait for Tasuaa [ninth day of the month of Muharram] and Ashoura from year to year; it’s an occasion to remember and understand the sacrifices of the great Imam.” Huraa’s dress, the traditional chador, gives the impression that she’s religious, though in Iran nothing is really guaranteed when it comes to beliefs.

Another girl, Maryam, just a few meters from Huraa, was distributing tea to passing cars. She was very active and served me a cup. I took the opportunity to ask her how Ashoura relates to a girl like her, given her yellow hair, modern dress and half-scarf. “This is part of our culture, we’ve been raised with these values,” she said. “I don’t understand what you mean by 'relates to me.' Imam Hussein is for the whole of humanity, and his thoughts are compatible with all societies. It’s very wrong to limit his message to only certain kinds of people.”

Ashoura is an opportunity for all Iranians to change their daily routines. While some go to the azadaris, some young men and women make use of the occasion to meet wherever there are gatherings and socialize while watching the parades, with large drums beating, synched to the sound of chest slapping. Young ones are allowed to stay outside until late, excusing themselves by saying they are at the house of Zahraa, Imam Hussein’s mother.

"O horse! Do not take my father away! No, horse, no. You will not bring my father back,” the aza reader quotes Imam Hussein’s little daughter Sakina saying goodbye to her father. “Father, I am so used to sleeping on your chest every night. Tell me, father, how I will go to sleep without you. Father, one last request! Please let me lie down one more time on your chest, please father.” Cries are almost everywhere, despite the fact most of them have heard it dozens of times. Still, they cry every time as if the scene is taking place in front of them.

For years, Ashoura and the death of Imam Hussein has been at the heart of every struggle in Iran. They know that it’s the pillar of any success: the constitutional revolution at the beginning of the 20th century, the 1979 Revolution, the US Embassy storming the same year, the war with Iraq, the standoff with the United States over the nuclear file and the recent war in Syria. To the Iranians, their enemies are always Yazid, and they are the nation of Hussein. Such rhetoric is capable of giving any struggle enough legitimacy and sacredness for people to be resilient and stand in the face of pressure.