In the post-Mubarak era, the United States must deal with “crowd democracy” in Egypt. 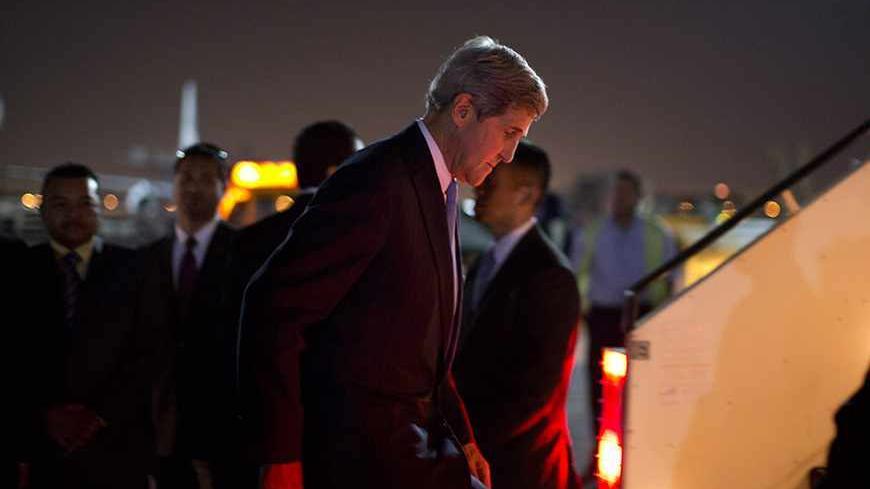 US Secretary of State John Kerry steps aboard his aircraft after meeting with members of Egypt's government in Cairo, Nov. 3, 2013. - REUTERS/Jason Reed

Two days before ousted President Mohammed Morsi’s trial, US Secretary of State John Kerry paid a visit to Egypt in what seemed an attempt to prevent further deterioration in the ties between the two former allies. Hours before, Lt. Gen. Vyacheslav Kondrashov, Russian deputy chief of staff and head of GRU military intelligence, was in Cairo meeting with Egyptian military chiefs and going through the list of Russian military hardware they want to buy in their first major arms transaction with Moscow in more than three decades.

In the joint press briefing with Foreign Minister Nabil Fahmy, Kerry tried repeatedly to assure Egyptians that the United States was their friend. He said, "I want to first express to the Egyptian people as clearly and as forcefully as I can, in no uncertain terms, the United States is a friend of the people of Egypt, of the country of Egypt, and we are a partner to your country." He admitted there were difficult challenges that strain the relationship, but he tried to convince Egyptians that US suspension of aid was not meant to punish Egyptians for their political choices. On his part, Fahmy spoke of the turbulence that rocked the relations, but said that Egypt’s decision to diversify arms sourcing is not directed against the United States.

A few weeks before, and while the United States was supporting the Muslim Brotherhood and pressuring Egypt’s interim government to stall a move against the Rabia al-Adawiya compound’s encampment — which was making Cairo resemble a civil war-plagued Beirut — Russia retasked some of its satellites to gather intelligence on the terrorists in the Sinai in support of Egypt’s fight against Islamist militants in the peninsula. All of a sudden, Russia has emerged as a de facto ally to Egypt and giant Putin posters have been reported spontaneously appearing in popular demonstrations in Egypt. Putin is rumored to be visiting Egypt this month.

Both the United States and Egyptian administrations downplay the rift between the two countries. But you can just see that each has taken a different path. The paths have parted. And with time, the parties will grow farther apart. It is life. Even close friends one day wake up and discover they have different interests leading each to take a different path, and before long they grow apart. But when did it all start? Is it really just because of the US administration’s position on what happened after June 30? I suspect the problems are much deeper and go back to grievances which have accumulated over years and even decades.

In the middle of the October 1973 war, then-President Anwar Sadat made it clear to Henry Kissinger that he intended this war would be Egypt’s last war against Israel, that he would entrust the Americans to be the "honest brokers” to negotiate a peaceful settlement for the Arab-Israeli conflict and that he would abandon the Soviets and rely on the United States to help Egypt become prosperous. This paradigm shift, many strategists believe, was the beginning of the end for the Cold War. Egypt, despite being a small country compared to world powers, has a habit of playing that decisive role which often signals the end of historical cycles. In the 19th century, Egypt, led by Mohammed Ali, triggered the end of the Ottoman Empire. In the 1950s, Egypt, led by then-President Gamal Abdel Nasser, ended the colonial era.

Now, 40 years after Sadat’s move toward the West, many Egyptians wonder if the United States has really been acting as an honest broker and a true friend. Palestinians, whose rights lie in the core that fuels the conflict — despite the painful concessions made — continue to agonize without a state. Robbed of their land, rights and dignity they have to endure the daily humiliation suffered by nomads and refugees. The remaining land on which they should have erected their state looks like a block of Swiss cheese with countless holes of Israeli settlement. Egypt itself never achieved or even came close to the promised economic prosperity. US assistance seemed to keep Egypt barely afloat, narrowly escaping one episode after another of chronic drowning and always gasping for air. Some even accuse the United States of using political Islam to keep the whole region in continuous sectarian conflict and prevent real development from ever taking place. Egyptians look at Iraq, Afghanistan and Syria and see a pattern congruent with Condoleezza Rice’s creative chaos plan that would end up breaking the Middle East into small statelets along sectarian lines.

Egyptians always hear threats of cutting US aid. Even worse, they are told that the main reason they receive this aid is to incentivize, or bribe them, to keep the peace treaty with Israel. Instead of being a kind gesture from a friendly American people wishing to help their Egyptian fellows, aid has become mere leverage to achieve Israeli interests. Gradually, Egyptians decided to coordinate directly with the Israelis without the need for a middleman. At that point, two things happened: The United States realized that Egyptians would probably keep peace with Israel because it served their interests regardless of US aid, and Egyptians realized that the United States — once described by Sadat as controlling 99.9% of the cards of the "game” — in fact has no cards to influence Israeli policy, since all the cards, including lobbying power inside the United States itself, are in fact in the clever hands of Israelis.

Is history repeating itself? Nasser, who started by seeking a close relationship with the United States 60 years ago, sought its endorsement to support Egypt in obtaining a loan from the World Bank to finance building the High Dam project. When turned down in a humiliating way by US Secretary of State John Foster Dulles, Nasser was practically forced to look East, fostering a new partnership with the Soviet Union and building the Non-Allied Movement with India's Prime Minister Nehru, Indonesia’s President Sukarno and Yugoslavia's President Josip Broz Tito in 1961. That shift probably cost the United States dearly for decades, but its consequences on Egypt were also devastating. The United States used its muscle to undermine Egypt’s role in the region. Egypt’s progress and ambitions were crushed by the humiliating defeat against Israel in 1967, with full support and approval from the United States.

Because of its strategic location, it is essential for Egypt to maintain friendly ties with the United States and Russia, as well as other world powers. It is also in the best interest of the United States to maintain friendly relations with the influential and pivotal hub which Egypt represents. But times have changed, and both countries must capture the essence of the new era. The Cold War is over, and the world has changed forever. Egypt is no longer governed by a president who can strike deals with whomever he pleases. Politics in Egypt are now shaped by the people, even without having an elected parliament or government, through the mechanics of crowd democracy. The US administration must rethink its policies in Egypt and the region if it wishes to restore the trust and goodwill of the Egyptian people. It should seek to build a relationship based on mutual interests and respect to avoid repeating mistakes of the past. Egyptians need to feel the United States is a genuine friend of their country, not one who pretends to be a friend just to protect the interests of Israel.

But fixing that troubled relationship will take more than a diplomatic visit and some carefully chosen words. Now that the old pillars — upon which the relationship between both countries stood — no longer exist, the United States and Egypt must take a deep look each at its own priorities and long-term interests to find new reasons why such a relationship is important and worth keeping, if any.