Three reasons for the Egypt-Russia rapprochement

The warming in Egypt-Russia ties is linked to the ups and downs in the US-Egypt relationship. 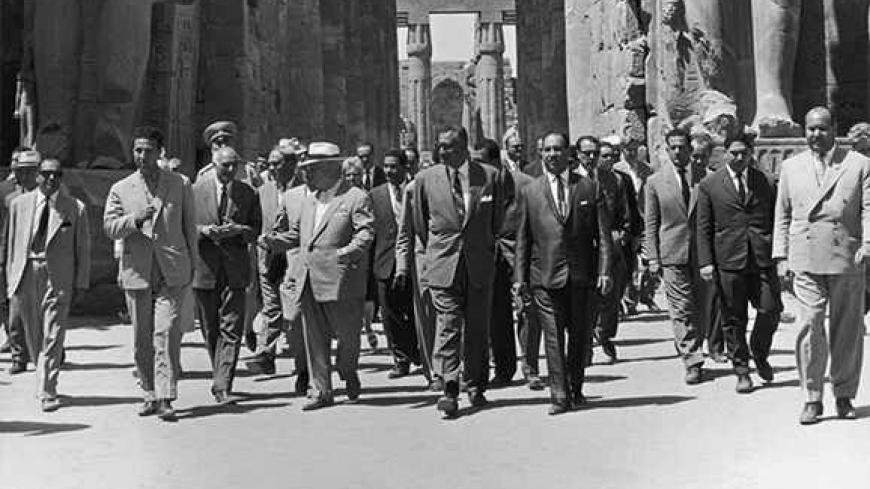 Egyptian President Gamal Abdel Nasser takes his guest, Soviet Premier Nikita S. Khrushchev on a tour of the ancient Temple of Luxor following a visit to the Aswan Dam, May 21, 1964. - Hulton Archive/Getty Images

CAIRO — In May 1958, Egyptian President Gamal Abdel Nasser started an 18-day state visit to Russia, a visit that officially marked a recalibration of Egyptian foreign policy away from the Western sphere, and toward the Soviet camp. Fifty-five years later, an Egyptian popular diplomatic delegation headed to Moscow in a visit that was described as fruitful and positive. The past is a prologue that can safely be applied to the current Egyptian-Russian relationship. In fact, many members of the delegation are known for their affection toward Russia. Actor Ezzat Al-Alayli spoke in a TV interview about the visit and how it rekindled past memories of his time in Russia in the sixties. Indeed, the sixties were the peak of this partnership, and Nasser’s tenure was marked by strong ties with the Russians —from military dependency to infrastructure projects, such as the Aswan High Dam, educational missions and even tourism.

The fascination, and dependency on Russia did not last. In 1972, Nasser’s successor, Anwar Sadat, ordered 20,000 Soviet military advisers and their dependents out of the country. The relationship between the two countries was formally ended by another high-profile visit in 1974, when America’s President Richard M. Nixon was warmly greeted in Cairo, not just by Sadat, but also by vast crowds that lined the streets. Many spectators even climbed lampposts to greet the seemingly bemused Nixon, who obviously did not expect such a warm reception by the Egyptian public. Thirty-seven years later, equally bemused American policy-makers are watching Egypt drifting away again and warming up to its old friend Russia.

The political flip-flop between East and West may be puzzling to some; however, it is somewhat inevitable, considering Egypt’s evolution over the last 50 years. The change of alignment in the '70s was mainly due to the change of political outlook in Sadat’s Egypt following the 1967 defeat, and the end of Nasser’s legacy. The current rapprochement between Russia and Egypt also stems from various changes in regional and local landscapes.

A message to America

The most obvious reason for this change is the partial suspension of American aid to Egypt following the July 3 military takeover. The subsequent vociferous campaign in the United States promoting an end to all aid has probably prompted the military leadership to warm up to the Russians. The potential outcome, as Zvi Bar'el has explained, will be, “At best, persuade the United States to change its attitude toward the military regime. At worst, it will give Russia a strategic foothold in Egypt.” In a way, he is right: In a previously unscheduled Sunday visit by Secretary of State John Kerry to Cairo, he expressed guarded optimism about a return to democracy in Egypt, which was probably an attempt to meet the generals halfway.

Nonetheless, there are other factors that make the current Egyptian-Russian rapprochement logical, and even inevitable.

First, there is Syria: Russia was once described in Egypt as an unreliable partner, particularly after the defeat in the 1967 Six-Day War. Now, in an ironic twist, the unfolding events in Syria have helped to portray Russia in a positive light. Putin’s solid backing of Syrian President Bashar al-Assad, without any lecturing or asking tough questions about morality, human rights, and a democratic path, was positively received in Cairo. Unlike a hazy, grayish US President Barack Obama, torn between principles and interests, Putin appeared clear and decisive, and unconditionally supportive. These qualities are appealing to the current interim leadership in Cairo.

Looking forward, the potential collapse of Syria as a state has also fueled both Russian and Egyptian fears about what lies ahead. A “Taliban Syria” is a joint nightmare. Last week, a high-ranking delegation of Egyptian officials visited Moscow, according to the Israeli newspaper Haaretz. A day later, the Saudi newspaper Al-Watan reported that the head of Russia’s military intelligence agency had arrived in Cairo. In addition, the Russian Pacific Fleet missile cruiser Varyag is scheduled to visit the Egyptian port of Alexandria. These visits may or may not be linked to Syria, but they have potentially been triggered by, and are certainly highly indicative of, the growing intimacy between Moscow and Cairo.

Second, a joint struggle against political Islam: Egypt and Russia both have had a long struggle against Islamist extremists. Interestingly, the current leadership in both countries blames foreign rivals for using radical Islam to weaken their states. Moreover, both leaderships have appealed to local clerics to reduce tensions and promote more moderate Islam. It is probably also true that both share a distaste for what they perceive as Western complacency with organized political Islamists such as the Muslim Brotherhood, which although perceived as moderate in the West, are in contradiction to the Russian and Egyptian assessment.

Third, shared experiences: Two turning points in the history of Russia further the feeling of a shared history.

One turning point was the 1917 Revolution: In 1917, Russia witnessed two revolutions. The first overthrew the czar in February, and the second revolution occurred in October amid growing chaos and populism. Despite various differences, the turmoil and sorrow of today’s Egypt looks in many ways similar to an early 20th century Russia.

The second turning point was the dissolution of the Soviet Union in 1991. Again, although there are several differences, the Arab awakening is comparable to the downfall of the USSR, at least in the struggle for freedom, democratic aspirations, and perhaps more important, in the ability of Russia to adapt, reinvent itself and make some serious structural reforms. Many Egyptian intellectuals are eager to learn from the Russian past. Both 1917 and 1991 can provide useful lessons for Egypt in 2013.

If turbulence is the norm in the Middle East, the relationship between Russia and Egypt is a perfect example of having ups and downs. Putin is expected to visit Egypt soon and although he may not be welcomed by joyful crowds similar to the ones that cheered Nixon in 1974, he will find a country trying to rightly balance its affiliations and partnerships, and eager to rekindle the past without repeating similar mistakes.