Egyptian President Abdel-Fattah al-Sisi’s visit to Serbia opens a new chapter in old relations between Cairo and Belgrade in the midst of the Ukraine crisis and may bring the activity of the member-states of the Non-Aligned Movement to the forefront of international relations. 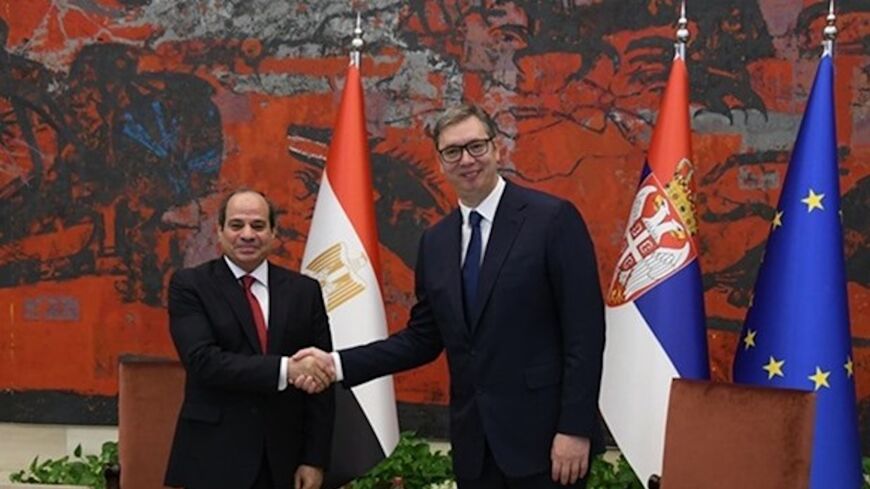 CAIRO — Egypt’s President Abdel Fattah al-Sisi arrived July 19 on an official visit to Belgrade in the first visit by an Egyptian head of state to Serbia in more than three decades. According to observers, Sisi’s visit would revive the two countries’ historical relations amid the ongoing Russian-Ukrainian war.

Sisi received a warm welcome at Belgrade Nikola Tesla Airport. He was decorated with the Order of the Republic of Serbia by Serbian President Aleksandar Vucic and presented with an honorary doctorate from the University of Belgrade.

Sisi and Vucic held bilateral talks on ways to strengthen their countries’ relations and discussed the latest developments on the regional and international scenes as well as issues of common interest, especially the Ukrainian crisis and the situations in Yemen, Syria and Libya.

A strategic partnership between the two countries was also launched during Sisi's visit, and 13 agreements and declarations in various fields were signed. The two countries also held their first economic forum in the presence of more than 130 companies from Egypt and Serbia.

In a joint press conference with Vucic, Sisi said that he discussed with his Serbian counterpart the developments of the Ukrainian crisis and the two countries’ efforts to overcome its repercussions, in addition to achieving food and energy security at this critical time.

“We stressed the need to find alternatives and solutions to spare the peoples the negative effects of the Russo-Ukrainian crisis,” he added.

For his part, Vucic said, “We have signed several agreements. This is just the beginning of a promotion of cooperation in many fields, which will consolidate the historical partnership with Egypt.”

Political relations between Egypt and Serbia, a successor state of Yugoslavia, date back to 1908. Former Egyptian President Gamal Abdel Nasser and Josip Broz Tito, a former president of Yugoslavia, had taken part in the establishment of the Non-Aligned Movement in 1961.

Milan Krstic, assistant professor at the faculty of political sciences at the University of Belgrade, said that this is the first visit by an Egyptian president to Belgrade in 35 years, and this signals that bilateral political relations between the two countries are very cordial, similarly to the period of close cooperation between Belgrade and Cairo during the Cold War.

“This visit was on the agenda already for a couple of years. However, it seems that the context of the war in Ukraine and the need for closer cooperation between Belgrade and Cairo has triggered the final realization of this three-day long visit,” he added.

The war in Ukraine has cast a shadow on Egypt, as Russia and Ukraine accounted for about 80% of Egypt’s wheat imports, and Russian and Ukrainian tourists to Egypt made up 40% of incomers. This has prompted Cairo to search for alternative markets in a bid to meet its needs.

Vucic said during the joint press conference in Belgrade, “It was agreed to sell grain to Egypt after we recently obtained a wheat export certificate … and we hope the same for beef exports.”

He further expected “the signing of a free trade agreement by the end of the year and the possibility of operating direct flights to Cairo, in addition to the current charter flights to Egyptian tourist resorts.”

Krstic said, “Serbia could probably expect support from Egypt in the sphere of energetics but also in the international political realm regarding [the] Kosovo issue. Despite the fact that [former President Mohammed] Morsi's government recognized Kosovo, Sisi never established diplomatic relations with Pristina. Potential de-recognition of Kosovo from Cairo would be [a] huge political gain for Serbia, but this does not seem to be an expected outcome at the moment.”

In 2013, Egypt recognized Kosovo as an independent state — Serbia does not recognize Kosovo as such. Yet Cairo has abstained from voting in favor of Kosovo’s membership in international organizations, including UNESCO in 2015.

During Sisi’s visit, Serbia’s Foreign Minister Nikola Selakovic held talks about Kosovo with his Egyptian counterpart, Sameh Shoukry, and expressed hope that Egypt will keep its stance unchanged on Kosovo’s membership in international organizations, according to the Serbian website TV N1 Beograd.

Speaking to Al-Monitor, Rakha Hassan, a former Foreign Ministry assistant minister and member of the Egyptian Council for Foreign Affairs, ruled out the possibility that Cairo will change its position on the Kosovo issue.

Hassan stressed that Sisi’s visit opens a new chapter in relations between Cairo and Belgrade that will help boost economic and trade cooperation. He noted that the visit’s results depend on the implementation of the signed agreements and memoranda of understanding.

He said that Sisi’s visit could bring the role of the Non-Aligned Movement back to the forefront, as Cairo’s and Belgrade’s positions on the Ukraine war converge.

He added that all eyes are focused on the future of international relations, which may require that the Non-Aligned Movement plays a new political role, particularly since Cairo and Belgrade were key member states of this movement during the Cold War in the 1960s.

Hassan explained that the current conditions in the international arena are similar to those when the Non-Aligned Movement was founded. There is a cold war between the United States and China, along with a hot regional war such as Ukraine and Russia, he explained.

But the revival of the movement’s political role is linked to India, the third key member-state that participated in the founding of the movement, according to Hassan.

He added, “Although Non-Aligned Movement conferences [were] hosted in Belgrade in 2011 and 2021, this does not mean that Serbia will aim formally to become a member of the movement, because that would signal diversion from the EU path. However, it will definitely tend to additionally strengthen its ties with the Non-Aligned Movement countries, and especially Egypt.”

Mohammed Soliman, a manager at McLarty Associates, an advisory firm based in Washington, told Al-Monitor that many countries, including Egypt and Serbia, are looking to maintain neutral stances amid this era of great power competition.

He added that “the hedging is a chosen foreign policy stance for the many powers and allows them to not be vulnerable in global power dynamics.”

Before heading to Belgrade, Sisi stopped in Germany. In a joint press conference with German Chancellor Olaf Scholz in Berlin on July 18, Sisi called on European leaders to persuade the International Monetary Fund (IMF) to ease conditions on Egypt. He said, “The food and energy crises are placing a lot of pressure on the Egyptian economy.”

Following his stops in Berlin and Belgrade, Sisi headed to Paris.

Hassan perceived that “Sisi’s tour comes under favorable circumstances, as Egypt is looking for economic support,” and noted that “Egypt has been negotiating a new loan with the IMF since March but has not reached an agreement yet, and it needs European support to have the IMF conditions eased.”

He said, “Many countries are suffering from an economic crisis, even Germany and France. Hence, there is an understanding of the situation in Egypt.”

Soliman, for his part, said, “Egypt wants to elevate its profile ahead of hosting the COP27, where Sharm el-Sheikh is expected to host a number of European leaders. Additionally, Cairo wants to change its relationship with Europe to become more of a partner on a wide variety of issues such as energy, immigration and food security.”