Egypt reaches out to Serbian Muslims

Cairo is making overtures toward Muslims in Serbia amid the Muslim Brotherhood's growing influence in neighboring Kosovo. 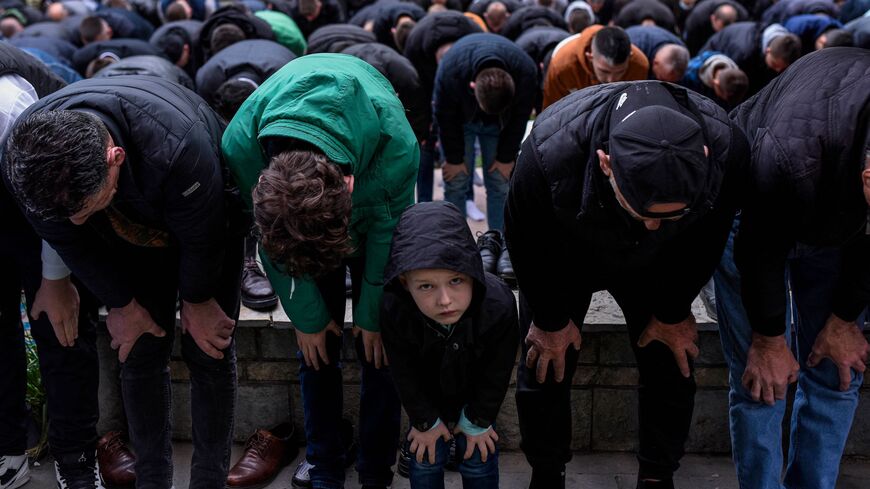 Muslim devotees offer an Eid al-Fitr prayer marking the end of the holy month of Ramadan at the Grand Mosque in Pristina on May 2, 2022. - ARMEND NIMANI/AFP via Getty Images

Egypt is working to strengthen its relations with Serbia’s Muslims as part of efforts to boost its influence in the southeastern European country.

During the meeting, Salah said that Cairo plans to send religious envoys to Serbia and to provide Serbian Muslim students the opportunity to study at Egypt’s Al-Azhar. He added that Serbian Islamic leaders will be invited to participate in Egyptian religious conferences.

The Egyptian overture toward Serbia’s Muslims comes as Cairo works to counter the growing influence of the Muslim Brotherhood in neighboring Kosovo.

In a May 2021 report, Al-Arabiya observed that Kosovo could become a safe haven from the Muslim Brotherhood members residing in Turkey following the recent Turkish-Egyptian rapprochement.

Former Egyptian President Mohammed Morsi, who was affiliated with the Muslim Brotherhood, had paid special attention to Kosovo during its years-long crisis with Serbia before it declared its independence in 2008. In June 2013, when the Brotherhood was still in power in Egypt, Cairo recognized Kosovo’s independence from Serbia.

Egypt's position changed after President Abdel Fattah al-Sisi took office and froze Cairo's recognition of Kosovo. Sisi began to show interest in rapprochement with Serbia and its economic benefits and made several other moves that were not supportive of Kosovo. In 2015, Cairo abstained from voting on Kosovo’s membership in UNESCO.

During Sisi’s visit to Belgrade in July, the two countries agreed on a deal for Serbia to export wheat to Egypt in light of the Russian-Ukrainian war. The two officials also discussed cooperation in the fields of energy and natural gas.

Sameh Eid, a researcher on Islamist movements, told Al-Monitor, “The Egyptian moves toward the Muslim community in Serbia were required in light of Egypt’s growing support to Serbia in its crisis against Kosovo, which was backed by the Muslim Brotherhood.”

He added, “The ruling regime in Egypt is aware of the influence and strength of the Islamic groups, namely the Muslim Brotherhood, in Kosovo.”

Eid said that the Muslim Brotherhood is trying to convince the Arab public that Egypt has abandoned Muslims and Cairo is responding with overtures to Muslims in Serbia.

He went on, “Through this support, Egypt is also seeking to boost cooperation with Serbia to [protect] the Islamic minority and prevent any Islamist groups from establishing a presence in Serbia and exploiting Muslim issues.”

Of note, Muslims in Serbia are a minority group at just over 3% of the total population of 7 million, according to the last census conducted in 2011.

Nourhan al-Sheikh, a political science professor at Cairo University, told Al-Monitor, “Egypt is interested in all aspects of cooperation with Serbia, especially at the economic level,” and “Boosting Egyptian influence in Serbia requires boosting religious and cultural cooperation.”

She explained, “Serbia is also important for Egypt to import wheat in light of the Russian-Ukrainian war and the world's need for alternative sources of wheat and grains.”