US, Iranian influence evolves in Iraq

After the Geneva breakthrough on Iran’s nuclear program and the potential for a US-Iran entente, it is worth looking at the role both sides play in an ever-turbulent Iraq. 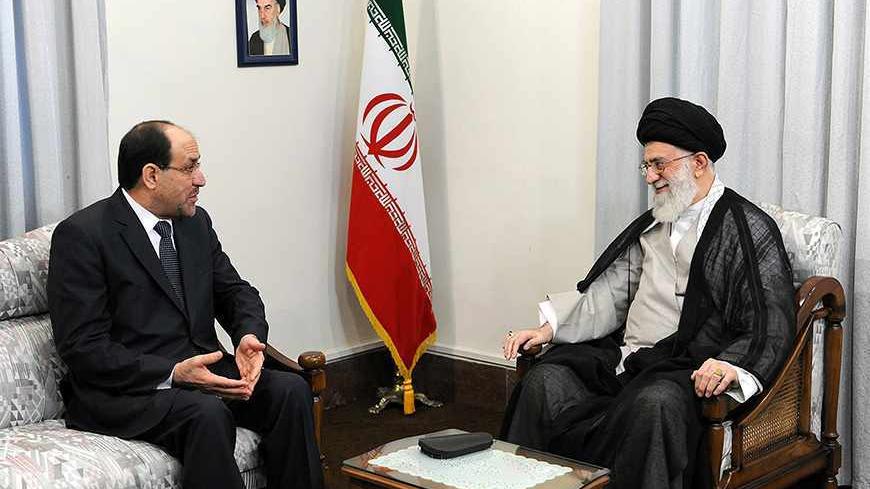 Iraqi Prime Minister Nouri al-Maliki will visit Tehran following the historic agreement that Tehran reached with the five permanent members of the UN Security Council plus Germany (P5+1) over its nuclear program.

An Iraqi government source told Al-Monitor on Nov. 24 that Maliki will be visiting Tehran for a few days over the coming weekend, where he will meet for the first time with Iranian President Hassan Rouhani and other major figures, including Supreme Leader Ayatollah Ali Khamenei.

The source, who did not provide many details on the visit, only noted Maliki’s agenda will include issues such as economic and security cooperation between the two countries, the Syrian issue and the agreement to share the Shatt al-Arab river, commonly known as the Algiers Accord.

The timing of Maliki's visit to Tehran carries a great deal of influence over the course of the talks. The trip comes just weeks after Maliki's early November visit to Washington, which stirred up controversy and prompted conflicting interpretations of its success, particularly with the ambiguous US stance on Maliki’s third term.

The visit coincides with the agreement between Iran and the P5+1. This historic agreement allows Tehran relief from international pressure on its nuclear program and sets off on a new course with the West. The development reflects a broader trend that emerged with the election of Reformist Rouhani to Iran's presidency.

The visit is also accompanied by Syrian variables on the ground, to the advantage of the Syrian regime, that precede the arrangements of the Geneva II meeting. This meeting is supposedly to discuss solutions to the Syrian crisis in consideration of realities that have changed since Geneva I, most notably the convergent US-Russian vision of a solution.

In the context of all this, Maliki will go to Tehran with the hope of renewing the tacit US-Iranian agreement on him staying for a third term.

All this data raises questions on the nature of the suggested solutions to the ongoing Iraqi crisis, in light of the variables in the regional and international arenas. It can be assumed that Iranian policy in Iraq will not necessarily remain the same following the agreement with the West on its nuclear program.

Yet no one can predict the political arrangements that were or will be made over Iraq against the backdrop of this agreement and in the context of the expected agreement on the Syrian crisis.

One of the expected results of the agreement on Iran's nuclear program is the opening of US-Iranian communication lines in the foreseeable future, which will probably lead to different understandings on the situation in Iraq. US Secretary of State John Kerry stressed, however, that the development of the US-Iranian ties in long run requires that Tehran “improve its behavior.”

Over the past years, Tehran has treated the situation in Iraq as the outcome of a regional conflict, rather than an internal conflict. Thus, the future of Iraq was strongly included in Iran's national-security requirements and crucially associated with the escalating conflict in the whole Middle East region.

Based on that consideration in particular, Iran has managed its influence in Iraq in order to achieve two goals: to keep its distance from the turmoil that resulted from the US occupation of Iraq, and to use Iraq as both a pressure card and a vital space to manage its conflict in the region and around the world.

This approach has been relatively successful for Iran, which has demonstrated its ability to manage a fierce regional conflict over its influence in the Middle East, just as it has managed the conflict with the UN Security Council and the international community over its nuclear program.

In contrast, Washington, which eventually withdrew from Iraq and has put up with a conspiracy that has spread for years in the Middle East among politicians, media and the people — that the United States handed Iraq to Iran on a silver platter — was not open to abandoning its role in Iraq to Iran. Rather, it has continued through both visible and invisible channels to affirm, develop and strengthen this role.

The US-Iranian tacit deal to renew Maliki’s second term in late 2010 was not the fruit of US-Iranian coordination, as many media outlets circulated. Rather, it was the result of a conflict at multiple levels that went beyond Iraq to regional and international balances. It is more like an agreement to keep the form of the Iraqi state at a minimally acceptable level.

Has this equation changed?

The answer to this question was not clear from Maliki’s last visit to Washington, and will probably still not be so after his visit to Tehran. This is because talking about strategic variables in the countries’ orientations requires additional time and continuous testing of their intentions.

The answer requires more detailed data: Is the current Iraqi situation, which is on the edge, sliding into a civil war and partition, acceptable to Iran and the United States? Is it acceptable that pulling Iraq out of this quagmire will be one of the results of the arrangements of the nuclear solution and the background of the Geneva II conference?