Israel’s finance minister has said Iran should have no centrifuges and no plutonium at all. 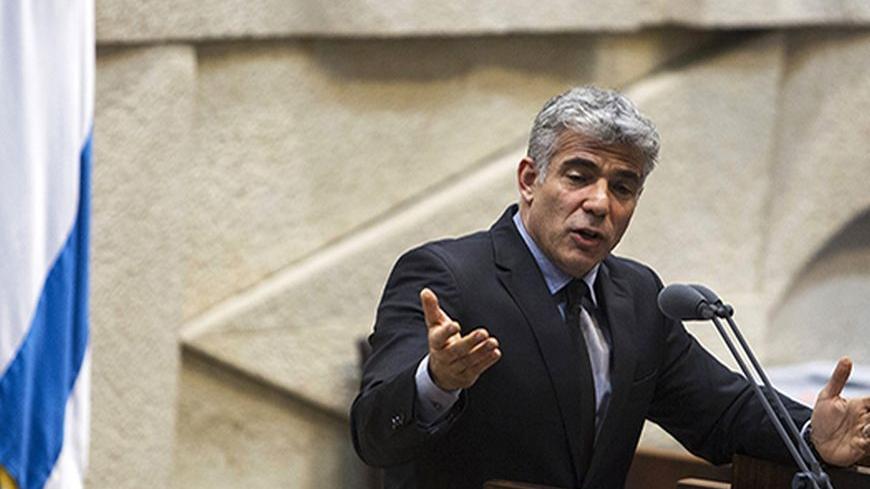 Israel's Finance Minister Yair Lapid gestures as he speaks during the opening of the summer session of the Knesset, the Israeli parliament, in Jerusalem, April 22, 2013. - REUTERS/Baz Ratner

After Prime Minister Benjamin Netanyahu focused his Oct. 1 UN speech on the Iranian nuclear program and pushed aside the Israeli-Palestinian conflict, Finance Minister Yair Lapid came to Washington and made it clear that negotiations with the Palestinians are the top priority of his diplomatic agenda.

Speaking at the Washington Institute Oct. 10, Lapid explained to the audience that negotiations with the Palestinian Authority are far more important, as far as he’s concerned, and the results will influence the fate of Israelis much more so than the Iranian threat. He was careful not to openly criticize Netanyahu and not to lay bare their disagreements, but just as he declared Sept. 17 that he was hearing new sounds coming from Tehran, in his speech this week he differed from the prime minister. Netanyahu, for his part, did not hold back. According to Israeli media reports, he said Lapid was expressing “the views of the left, which leave open the possibility of a continued Palestinian struggle.”

“The Israeli-Palestinian issue is the key,” the finance minister told his Washington audience, seeking to convey an air of optimism. Lapid, who has made no secret of his intention to run in the future for the position of prime minister, knows the road to the prime minister’s office in Jerusalem must also pass through the White House, not far from where he delivered his speech.

Now that an American attack on Syria is off the table and attempts are being made to promote a diplomatic solution to the Iranian issue, the subject that remains unresolved is the conflict between Israelis and Palestinians. Most of the diplomatic effort will be invested from now on in this channel. Lapid knows this well and is raising the negotiating flag even higher than the head of the Israeli negotiating team, Justice Minister Tzipi Livni. In a conversation with Al-Monitor, he sounded more conciliatory in his attitude toward negotiations with Iran, too.

An excerpt from the interview follows.

Al-Monitor:  You sound more optimistic than Netanyahu toward the change in Iran.

Lapid:  They’re talking, so one must listen. I was against walking out of the UN General Assembly [which the Israeli delegation did during the speech of Iranian President Hassan Rouhani]. But there are demands that can be presented: They shouldn’t have centrifuges.

Al-Monitor:  That is a different red line from the one drawn by Netanyahu.

Lapid:  If you talk about precisely 3% [uranium enrichment] and then turn the 3% into 20%, and then into more, everyone immediately gets lost. Let’s provide a formula that won’t get people confused: No centrifuges and no plutonium. That’s the rule, because neither one of these is for peaceful purposes.

Al-Monitor:  Can one say that in Syria’s case, diplomacy won?

Lapid:  What succeeded was diplomacy backed by real power. The policy of diplomacy would not have succeeded had gunships and Tomahawk missiles not been directed toward the palace in Damascus. Without that, there’s no diplomacy. Diplomacy backed up by threat, and a willingness to use it does work — and it did.

Al-Monitor:  Can this apply to Iran, too?

Lapid:  It works for Iran, the sanctions work, too.

Al-Monitor:  You talk about the trust that must be rebuilt between Israelis and Palestinians. But what about the extent of your trust in the prime minister? Do you believe that Netanyahu is ready for concessions and progress in the Palestinian channel?

Lapid:  If I’m sitting in the same government, I must have reason to believe.

His words are significant, and the gap between the position of Netanyahu and the line drawn by Lapid is great. As far as Lapid is concerned, Israel can accept an Iranian nuclear program as long as it doesn’t turn into a nuclear bomb. “No centrifuges and no plutonium” is a new slogan, different from Netanyahu’s uranium-enrichment stance. And like his remarks regarding talks with the Palestinian Authority, this formula that the finance minister presented in the United States is very pleasing to American ears.

In his speech, Lapid reiterated what he said during an interview on Bloomberg Television: “I say there’s disagreement between me and the prime minister on the subject of the Jewish state. My father didn't come to Haifa from the Budapest ghetto in order to get recognition from Palestinian Authority President Abu Mazen [Mahmoud Abbas]. The whole concept, to me, of the State of Israel is that we recognize ourselves, and this suffices.”

Lapid was trying to bypass one of the first and most significant obstacles in talks with the Palestinians — Israel’s demand for a public Palestinian declaration that it recognizes Israel as a Jewish state — before conducting negotiations over core issues like borders, refugees and Jerusalem. But this solution that Lapid raised in the United States but not yet in Israel is intended mostly for the ears of Secretary of State John Kerry and, if possible, those of President Barack Obama. The big question is whether the finance minister will maintain the same tone and act with the same motivation in Israel.