Israel's finance minister has told a Washington audience that Israelis and Palestinians should unite against "the media, cynicism and people who say 'no,'" but keep to a hard line on Iran. 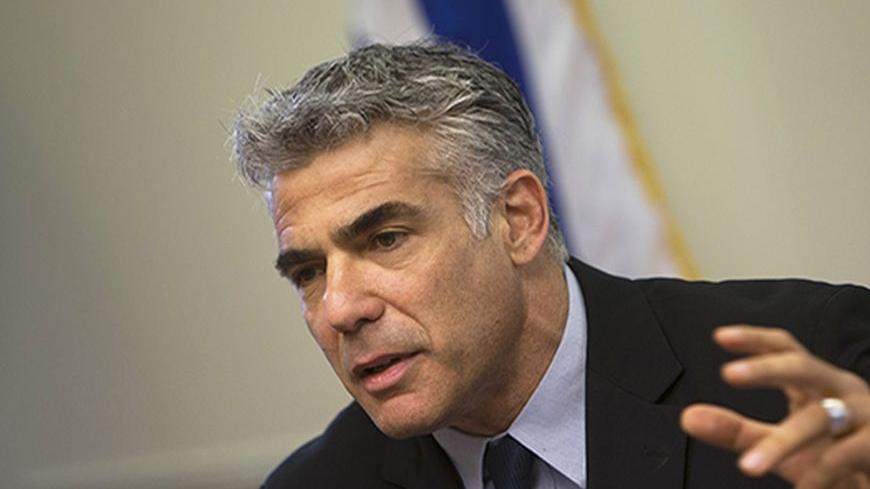 Israel's Finance Minister Yair Lapid gestures as he speaks during a Yesh Atid party meeting at the Knesset, the Israeli parliament, in Jerusalem, May 20, 2013. - REUTERS/Ronen Zvulun

Israeli Finance Minister Yair Lapid, best known for his views about the secular-religious divide in Israeli society, delivered an impassioned plea Thursday, Oct. 10, for an Israeli-Palestinian peace agreement, calling it “a key” to improving the lives of ordinary Israelis and the stature of Israel in the world.

Speaking in Washington where he was attending the annual International Monetary Fund/World Bank meetings, Lapid departed from Prime Minister Benjamin Netanyahu in putting the Palestinian issue — not Iran — at the top of Israel’s security priorities. Lapid, a former TV anchor whose new Yesh Atid party rocketed to 19 Knesset seats in elections last year by appealing to Israel’s secular middle class, said Israelis and Palestinians should try to reach agreement on an “endgame” and then decide on a time to implement it.

“The Palestinians and the Israelis need to know how the story is going to end,” Lapid told the audience at the Washington Institute for Near East Policy. Implementation, he said would take time, perhaps as long as a decade. “I need time because I do not believe the Palestinians. … I need time to get over it,” he said.

The Palestinians, he acknowledged, are equally distrustful of Israelis after two decades in which neither have kept their promises to each other: Israelis have increased settlements and Palestinians have attacked Israel, particularly from Gaza. Despite this difficult record, Lapid said now was the time to “jump-start” talks again because the Palestinians have had 20 years since the Oslo Accords to manage territory and “they’ve been through a lot.” A peace agreement would also boost the Israeli economy and deflect criticism from those who depict Israel as Goliath and the Palestinians as David, he said.

Wearing a suit jacket, white shirt and tie and black jeans, the telegenic Lapid — who turns 50 on Nov. 5 — exuded energy and optimism. But pressed on details about the “endgame,” Lapid demurred, apart from saying the accord would not include Jerusalem but would involve the evacuation of “tens of thousands of Israelis” from West Bank settlements. Under the terms of the new US-led peace initiative that began earlier this year, only US Secretary of State John Kerry is allowed to discuss the talks in public. US envoy Martin Indyk has recently increased his staff in what appears to be an intensive new push for progress.

Lapid suggested that pessimism and cynicism were the real obstacles to peace, not what he called “technical issues,” such as borders. “The problem is about fear, mistrust and past traumas and anxieties, hatred, pain and bad memories,” he said.

Rejectionists on both sides will try to prevent progress, he added. “The people who say ‘no’ [are] the common enemy ... We need to unite the people who are saying ‘yes.’”

Ziad Asali, president of the American Task Force on Palestine, appeared to endorse Lapid’s idea, saying, “It is possible to make concessions from a weak position if you know the endgame.”

Later, Asali told Al-Monitor that he had never heard Lapid before, but was impressed by his emphasis on psychological blockages to peace.

“Let’s change this mindset,” Asali said. “I think this is very serious business.”

Lapid, who initially sought to be foreign minister, repeated remarks made in a recent interview with Charlie Rose that Israel does not need explicit recognition from the Palestinians as a Jewish state — something Netanyahu has demanded and the Palestinian Authority has refused — because “we recognize ourselves. We are masters of our own destiny, therefore we need no recognition from anyone else.”

While Lapid was all about compromise when discussing the Israeli-Palestinian issue, he retreated to the Israeli government line when it came to Iran.

A month ago, Lapid told CNN that he was hearing “new music” from Iran after the election of Hassan Rouhani as president. But on Thursday, asked by Al-Monitor if it didn’t also make sense for negotiators also to show Iran the “endgame” before demanding that it curb its nuclear program, Lapid said the United States and other countries should maintain and if possible enhance sanctions until “the centrifuges are not rolling anymore and the plutonium reactor [at Arak] is dismantled.” President Barack Obama's administration has not ruled out some level of uranium enrichment on Iranian soil in return for stringent curbs on the quantity and quality of uranium and more intrusive monitoring by the International Atomic Energy Agency. Talks resume next week in Geneva and some Israeli officials seem nervous that the United States will concede too much in return for too little.

Lapid described Iran as an “international issue” as opposed to just an Israeli concern. Asked by Al-Monitor whether the biggest threat to Israel wasn’t the growing divide between secular and ultra-Orthodox Israelis, Lapid said there had been progress on this front, his signature issue. He said 70% of ultra-Orthodox youth would be subject to the draft three years from now and that next year, 28,000 would get letters requiring them to perform some sort of national service. Already, he said, there has been a decrease of more than 4,000 in enrollment in yeshivas — a reflection perhaps of the government’s decision to cut allowances for students at these religious schools. Lapid said the Israeli government is also reducing child allowances to discourage ultra-Orthodox families from having such huge families.

“Every social change has pain to it,” Lapid said.
Barbara Slavin is Washington correspondent for Al-Monitor and a senior fellow at the Atlantic Council, where she focuses on Iran. On Twitter: @BarbaraSlavin1