Despite the efforts of Iraq and the six countries bordering it, Iraq’s borders are easily navigated by professional smugglers. 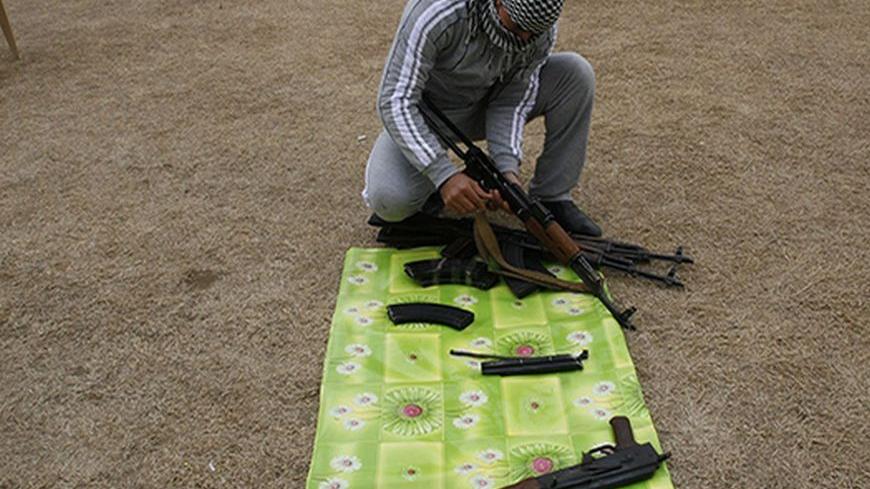 A weapons dealer checks AK-47 rifles before selling them to smugglers transferring it to Syria, at his house near the city of Mosul, 390km (240 miles) north of Baghdad, Feb. 16, 2012. - REUTERS

Khurshid, the khajakji (the local word for a smuggler), smiled when he spoke of the border. “It’s a fairy tale for domestic consumption only, not a reality, at least for us,” he said.

Khurshid is a Kurdish smuggler who is now “retired” because of his age. He and many of his colleagues have left the profession and are now in the trade business. They do not use the word khajakji because it connotes an illegal activity. But Khurshid believes he performed a national service for the Kurdish people, as they faced a suffocating, government-backed, decades-long blockade and greatly relied on smugglers for food, fuel and goods.

He told Al-Monitor, “Borders are thought of as official outlets, stations or steel barriers, but the definition is completely different for smugglers who see borders as fluid and overlapping, with thousands of routes that are only known to the people on both sides. ... Millions of Iraqi soldiers and Iranians used to be deployed on both sides of the border between the two countries throughout the Iran-Iraq war (1980-1988). The fighting and shelling was nonstop. Despite that, we never found it difficult transporting supplies, fuel or even people between the two countries.”

Khurshid and Salman al-Shammari, who lives in Mosul and for years smuggled to and from Syria despite the closure of the border throughout the 1970s and 1980s, consider smuggling to be more about timing than location. Borders are considered true borders only when there are official forces guarding both sides, not at other times. So smugglers are good in the “timing” game.

Iraq’s borders are a problem with all its neighboring countries. In addition, there are disputes with a number of countries over the border demarcation line and the ownership of oil wells. Cross-border smuggling has been a major concern for countries in the region.

The level of border control differs between countries and changes from one time to another.

On the 1,458-kilometer (906-mile) Iraq-Iran border, the smuggling of weapons, drugs and people has always been a major and unsolvable problem. Most smuggling takes place in the south: in Basra, Amarah — where there are large stretches of marshes and swamps on the border — and Wasit, and through some smuggling routes in the north.

Until recently, the smuggling across the 242-kilometer (150-mile) Iraq-Kuwait border was about wines and people. But after the second Gulf War, when international observers deployed there, conditions on the short border became more complicated.

The 814-kilometer (506-mile) Iraqi-Saudi border, which extends across the vast Western Desert, was open for decades for nomads but also for smugglers and drug traffickers coming from Iran and Afghanistan to Saudi Arabia — a practice that is still going on.

The sheep trade was a major smuggling route along the 181-kilometer (112-mile) Iraq-Jordan border — which is short compared to that of other countries — making smugglers less active there.

After 2003, the 605-kilometer (376-mile) Iraq-Syria border has been the most eventful and was considered the most dangerous because it was being used by al-Qaeda fighters and for weapons smuggling. Before 2003, things were not much better on that border.

The 331-kilometer (205-mile) Iraq-Turkey border has been the source of a permanent crisis between the two countries, because it was being used by Kurdistan Workers Party (PKK) fighters to conduct operations inside Turkey. That border has for decades been a battleground with the Turkish government, which has repeatedly complained about it.

The Iraqi borders are complicated. They have always facilitated the spread of the smuggling profession — especially in the border towns — which often share social and historic ties with the towns on the other side of the border.

Many members of the tribes in Shamar on the Iraq-Syria border carry both nationalities. The same goes for the city of al-Qaim in Iraq and Boukamal in Syria. Residents of those two towns are considered one family divided by a border.

For border town residents and for Shammari, a border line is no more than a step they take. Shammari told Al-Monitor, “The matter is not limited to the network of social relations, smugglers also make long-term deals with the authorities and border guards in all countries. Their moves are calculated and secure. In a worst-case scenario, if they are arrested, they find ways to avoid punishment.”

Shammari asserted that he never participates in transferring fighters across the Syrian border. But he also believes that “gunmen from both sides have become smugglers themselves. After their long experience, they no longer need a traditional guide.”

Khurshid sees the border similarly. He said that there is a deep-rooted relation among smugglers in various regions, and countries and many family names have become associated with smuggling.

He told Al-Monitor, “In the 1990s, smuggling people was concentrated on the Turkish border, where thousands of young people from different Iraqi cities sought smugglers to escape [former President] Saddam Hussein’s regime and for a chance to get asylum in Europe.”

Other smugglers contacted by Al-Monitor refused to talk, to keep the details of their profession secret. But one smuggler told Al-Monitor on the phone, “The authorities have become more strict with us. They now consider smuggling sheep and some goods enough to consider us terrorists or for facilitating the infiltration of terrorists. It is true that there are those who do that, but those specialize in smuggling people. For us, our profession goes back centuries. We don’t know how to do any other work. We don’t want to get involved in the internal problems of states.”