An ambush on the Iraq-Syria border that killed 62 Syrian soldiers and nine Iraqi guards has brought the Syrian civil war to Iraq, writes Mushreq Abbas. 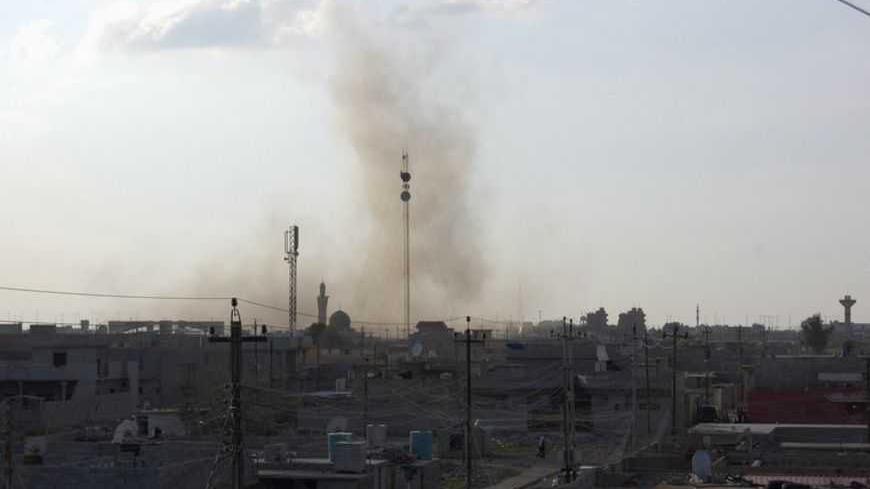 Smoke rises after what the photographer said were missiles fired by a Syrian Air Force fighter jet loyal to President Bashar al-Assad at the Syrian town of Yaarabiya, near the main border between Syria and Iraq March 2, 2013. - REUTERS/Khalid al-Mousuly

Military clashes erupted earlier this month around the Rabia-Yaarabiya border crossing between Iraq and Syria.

Two days following this incident, armed groups that are believed to have infiltrated into Iraq from Syria attacked an Iraqi military convoy in Anbar.

According to the Iraqi army, armed groups that infiltrated into Iraq from Syria attacked an Iraqi military convoy, which included 70 fighters affiliated with the Syrian Army, who had fled from the Rabia-Yaarabiya crossing, seeking refuge in Iraq.

Iraqi forces had sought to transfer them to al-Walid border crossing to be returned to Syria when the military convoy was ambushed by armed groups, which killed and wounded 62 Syrian soldiers and nine Iraqi guards.

Different scenarios for the developments of the military and political conflict, which has ignited on the vulnerable border between the two countries and affects the future of their actions.

Clashes between the Free Syrian Army (FSA) and the Assad regime forces over control of the crossing at Yaarabiya have intensified as Iraqi troops stationed at the Rabia border crossing in the Iraqi province of Mosul — 400 km [about 250 miles] north of Baghdad — intervened.

The parties in the crisis exchanged accusations regarding the reasons for the clashes. Yet, these accusations differed with the different political backgrounds on both sides of the border. Syrian President Bashar al-Assad’s regime said that gangs affiliated with al-Qaeda attacked the border point, while Maj. Gen. Salim Idriss, chief of staff in the unified leadership of the FSA, which opposes the Syrian regime, said that his “militants attempted to control the crossing.” He noted, however, that “Iraqi forces took part in the clashes, defending the regime’s military unit, and opened fire, killing six members of the FSA.”

A spokesman for the Iraqi Ministry of Defense, Mohammed al-Askari, denied that Iraqi troops intervened, saying that the FSA fired across the Iraqi border, and that four wounded Syrian soldiers were taken into Iraq for treatment. Yet, the governor of Mosul, Ethel al-Nujaifi, criticized the Iraqi intervention in the fighting, saying that Syrian warplanes overflew Iraqi airspace to shell the opposition militants, and that this overflight was not deterred by Iraqi troops.

Hours before the incident, the FSA broadcast a message saying that its military convoys and equipment had entered from Iraq into Syria via the Rabia-Yaarabiya crossing. Preceding this talk, Iraqi forces — mostly coming from the Shiite south of Iraq — concentrated in the area surrounding the crossing. Meanwhile, Syrian media outlets broadcast official information indicating that there had been instances of border penetration, and weapons and individuals from the al-Qaeda affiliated Jabhat al-Nusra had crossed the border into Syria from the same crossing.

From 2003 to 2011, the Iraqi and US authorities accused the Syrian regime of failing to control the border with Iraq. This accusation also provided an occasion to accuse Damascus of supporting al-Qaeda fighters, who carried out most of the attacks that were occurring in Iraq. They also accused Syria of providing these fighters with safe havens and training camps across the border. At the time, the Assad regime stressed that it was impossible for any country to unilaterally control its border with another country.

This transition in the Iraqi stance that occurred after the outbreak of fighting in Syria is related to the fragile border situation between the two countries. Iraqi Sunnis, who are numerous in the areas near the Syrian border, supported their counterparts in Syria. They abandoned the Assad regime, which in the past they had frequently praised, considering it to be a model for Arab nationalism. Meanwhile, Iraqi Shiites, who control the government in Baghdad, went from accusing Assad — who belongs to the Shiite-linked Alawite sect — of supporting terrorism to accusing his opponents of carrying out terrorist acts.

It was the fragile situation on the border that prompted Iraqi Prime Minister Nouri al-Maliki to say that the opposition's victory in Syria would trigger a civil war in Iraq.

Arab nationalists say that the borders between Arab countries are "artificial" and exist only because of the Sykes-Picot Agreement, which was signed at the beginning of the 20th century. These borders are not based on standards of national identity, geography or history. However, given that nearly a century has passed since borders were drawn between regional countries, social differences between these nations were perpetuated. Despite this fact, what is known today as the "border disputes file" is still a source of crisis between most countries in the region.

While the border between Iraq and Syria has not witnessed deep disputes regarding territorial membership, the distribution of residents along the extent of the border has been a constant cause for concern for the authorities in both nations.

Furthermore, the Shamar tribe — one of the largest Arab tribes, whose members originally migrated from Hail and Najad in Saudi Arabia — is concentrated on both sides of the border in the Iraqi province of Mosul and the Syrian province of Hasakah. In addition, other tribes and families are spread out on both sides of the border in the Iraqi city of al-Qaim in Anbar province and the Syrian city of Abu Kamal. In the areas between these cities, geography overcomes nationality and the  border practically dissolves. Similarly, there is a narrow strip of border, represented by the Faysh Khabur crossing point, which separates Kurdish areas in Iraq and Syria and which was outside the control of the authorities in both countries.

Historical facts indicate that until the beginning of the twentieth century, the Syrian cities of Abu Kamal, al-Mayadeen and Deir al-Zour were on the Iraqi side of the border drawn up by the Ottomans between the Syrian and Iraqi vilayets. This even remained the case following the British occupation of Iraq and the French occupation of Syria. However, things changed after 1919, when Syrian tribes launched attacks on the cities and imprisoned a number of British officers who were stationed in the area. This led to Britain acknowledging that these cities were within Syria's borders.

Moreover, the presence of Shamar tribes in the region is linked to a type of historical independence. Most of the tribes elders and members hold both Iraqi and Syrian citizenship, and many of them even have Saudi or Qatari citizenship.

This overlap in language, history, family relationships and economic interdependence between both sides of the border did not weaken in the mid-1990s, nearly 30 years after the political estrangement between the two countries. At that time, the regime of Saddam Hussein in Iraq and that of Hafez al-Assad — Bashar al-Assad's father — in Syria, acknowledged that they could not control the border or smuggling operations between the two sides.

The Syrian unrest in 2011 was enough to stimulate new ideas including changing the border. For the first time, religious calls emerged in support of redrawing the border to unify Sunni regions on both sides. In the meantime, fears increased among the Shiite authorities in Baghdad and southern Iraq, who were worried that Sunni areas in Iraq would transform into a stronghold for Syrian revolutionaries, or that Syria would transform into a stronghold for Iraqi Sunnis who oppose the Baghdad regime.

While these fears are certainly strengthened by the fragile border situation, even worse was the fragility of the regime in both countries. These political regimes have failed to instill a sense of national belonging among citizens, causing nationalist, religious and sectarian affiliations to be pushed to the forefront.

What happened at the Yaarabiya-Rabia crossing was not a military confrontation in the strictest sense of the word, but rather was an extension of the national turmoil on both sides of the border. This turmoil is likely to expand and take on a more dangerous image in the future.