As attacks and casualties continue to increase, Iraqi authorities have sent troops to the border with Syria in an effort to slow the flow of jihadist fighters, 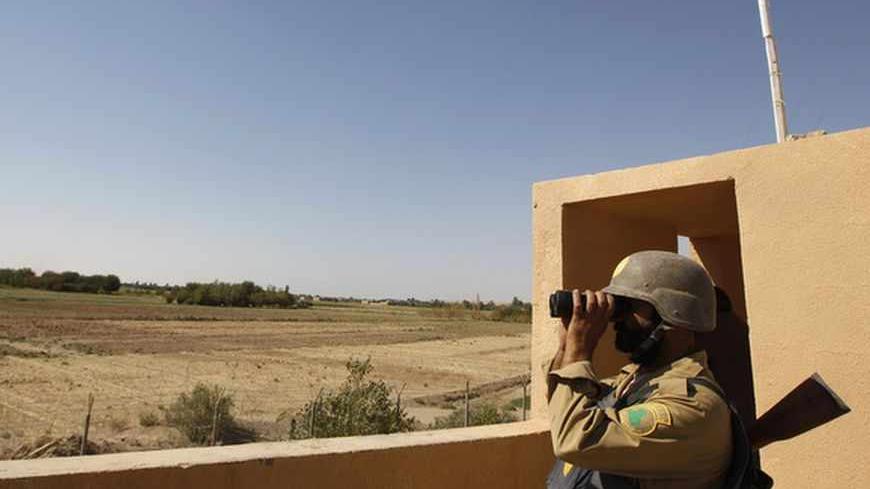 Iraqi Prime Minister Nouri al-Maliki, commander-in-chief of the Iraqi armed forces, decided on the night of June 16, to move nearly 8,000 Iraqi troops toward the Iraqi-Syrian and Iraqi-Jordanian borders. This comes a few days before local elections are to be held in the cities of Mosul and Anbar.

A senior military official in Maliki's military office said in a statement to Al-Monitor that “four regiments of the ground forces, each consisting of nearly 2,000 troops and protected by armed helicopters, had arrived to the border with Jordan and Syria.”

The official, who is a senior officer supervising the security situation in the Sunni provinces, said, “The objective in moving the troops to the border is to secure Iraqi areas adjacent to the border and to prevent fighters from sneaking into [Iraq].”

The official, who spoke on condition of anonymity, added, “The forces that have finally arrived to the border are equipped with sophisticated heavy weapons,” without giving any further details.

The province of Mosul had earlier announced the arrival of military reinforcements into the city to protect voters who will cast their ballots in the provinces of Ramadi and Mosul, which are adjacent to Syria, on June 17.

During the day on June 16, a series of bombings targeted different Shiite majority areas in the central and southern parts of the country, while the UN described these acts of violence as “ruthless.”

The car bombings left 30 people dead, including members of the police force.

Police said that the deadliest attacks took place in the Shiite city of Kut, near the Iraqi capital, Baghdad, where they targeted an industrial zone and a gathering for construction workers.

It seemed clear that the bombings targeted civilians, as two car bombs exploded almost at the same time in a shopping area in the Shiite city of Basra, killing five people.

Another car bomb killed at least seven in the Shiite city of Najaf.

Last month was the bloodiest month since 2008, as 1,045 civilians and security members were killed.

Yet, these bombings have a different objective this time, according to a security assistant for Maliki at the office of the commander-in-chief of the armed forces.

In a statement to Al-Monitor, Zuheir al-Jalabi, a Sunni consultant in the security division within Maliki’s office, confirmed that he has “information on al-Qaeda in Iraq’s new plan to force the troops to concentrate in the cities, in which the bombings and acts of violence take place.”

Jalabi said, “Gunmen want to reduce the pressure that has been imposed on them by the Iraqi military at the border for several months.”

He also said, “The bombings in Iraq increase every time Syrian fighters who oppose the Syrian regime sustain painful military strikes, as just happened in the Qusair battle.”

Jalabi claimed that “the leadership of Jabhat al-Nusra in Iraq includes officers in the former Iraqi army, and late President Saddam Hussein’s intelligence and security services, who currently oversee the coordination between the fighters in Iraq and Syria.”

Jalabi added that “the Iraqi army is conducting security operations to cut off communications between gunmen on both sides.”

Yet, Jalabi, head of the Nineveh support council — a security formation affiliated with Maliki — confirmed that the infiltration of gunmen does not take place through official border crossings, but through large swaths of land that make up the long border between Iraq and Syria.

On the other hand, Saadoun Shaalan, a member of the Anbar Provincial Council, told Al-Monitor that “the armed clashes between Iraqi forces and gunmen on the Syrian side are increasing along the border.”

Shaalan expressed his belief that the Iraqi army cannot confront gunmen in the desert because it does not have experience in such a harsh environment.

Ali Abel Sadah is a Baghdad-based writer for both Iraqi and Arab media. He has been managing editor for local newspapers as well as a political and cultural reporter for more than 10 years.