Iraq's leaders have no answers as they struggle to reassure Iraqis after a wave of terrorist bombings. 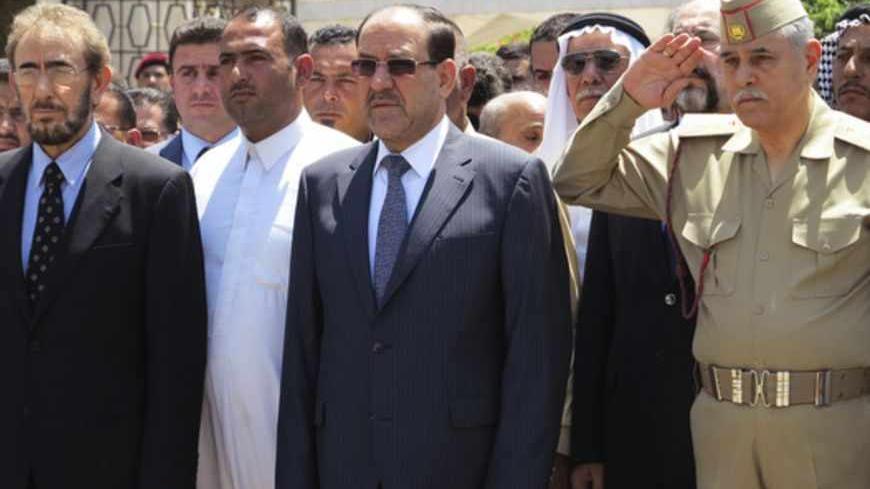 May 20 was a terrible day for the residents of Baghdad and other Iraqi cities. It started as more than 10 car bombs detonated, killing and wounding dozens of civilians.

The scenes of destruction in Baghdad, Basra, Babel and other areas coincided with a political crisis on the verge of complete meltdown. In addition, many Iraqi observers were disappointed that the political forces did not reach peaceful solutions.

The demand by Iraqi Prime Minister Nouri al-Maliki “to prevent civil war from taking place" reflects to some extent that the Iraqi elite's feeling that war will soon break out again, particularly since the climate that prevailed in 2006 and 2007 has been restored.

Maliki’s warnings came as Baghdad was targeted by a wave of large-scale bombings, and after the initiative for dialogue with protesters in the Anbar province failed with the withdrawal of cleric Abdul Malek al-Saadi, the spiritual leader of Sunnis in Iraq.

Baghdad got the largest share of the bombings, where at least 25 people were killed and 129 injured, a source from the Iraqi Ministry of Health told Al-Monitor’s correspondent.

In southern Iraq, two car bombs exploded in the oil-rich city of Basra, the country’s only seaport, killing 13 people and injuring 40 others. In the city of Tikrit, the hometown of late Iraqi President Saddam Hussein, at least two soldiers were killed and 15 others were wounded in a car bomb that targeted an army barracks in the south of the city.

In the city of Samarra, where Saadi had wanted negotiations between protesters and the government to take place, a car bomb killed 11 members of the Sahwa movement and wounded 10 others.

In the Sunni province of Mosul, north of Baghdad, two IEDs placed on the road near a small village south of Mosul city targeted the convoy of Nineveh’s police chief. As a result, a first lieutenant and five members of the police chief’s protection team were injured.

The government’s reaction involved the same procedures it had previously taken when similar attacks rocked the country. The Interior Ministry posted the same statement it had used earlier on its official website after the May 16 attacks. The statement called for tightening security controls and holding accountable senior officers who are in charge of the areas in which the bombings took place.

Yet, Maliki believes that security incidents are a bad omen portending an impending civil war in the country. For this reason, he suggested that Sunnis and Shiites observe unified prayers every Friday in Baghdad. This suggestion came in a news conference attended by Al-Monitor held on the afternoon of May 20. He also threatened to disclose names of Iraqi politicians who leak sensitive information to armed groups and are linked to them.

It is not the first time that Maliki has said that his partners in the political process have supported armed groups. Both citizens and political commentators in the local press have always asked: Why has he been working with them all these years?

Maliki’s threat to disclose names of politicians who are associated with terrorism was similar to a response to the call made by Sunni Parliament Speaker Osama al-Nujaifi. Nujaifi had called for an emergency session to be convened in the presence of the defense minister in order to discuss the deteriorating security situation.

In a news conference attended by a number of ministers, including Sunni leader Saleh al-Mutlaq, a member of the Iraqiya List, Maliki said, “MPs should not attend parliament sessions to discuss the deteriorating security situation in Iraq.”

Al-Monitor asked military leaders — close associates of the office of the commander-in-chief of the armed forces — about potential changes in the security services, particularly since the armed attacks occured over four days, starting May 16. Everyone had reservations when it came to providing an answer. A media source confirmed that changes in the chain of command of some important military units will be made in the coming weeks.

While local public opinion increasingly expects a civil war to re-erupt between Sunnis and Shiites in Iraq, Mutlaq is renewing calls for dialogue between political leaders.

In a statement posted on his personal website on May 19, Mutlaq said, “All political and parliamentary-bloc leaders need to hold an urgent meeting to discuss political developments, their impact on the security situation and the ongoing cycle of killings that threatens the lives of innocent people.”

In Ramadi, leaders of anti-Maliki protests had a stronger reaction to the Baghdad explosions. One protest leader in the city called for the ousting of Maliki.

Sunni politician Ahmed al-Alwani, who leads his tribe’s members in the anti-Maliki protests in Ramadi, said, “The political crisis has reached an impasse. There is no solution but to oust Maliki and hold him, as well as security ministers, accountable.”

The Iraqi parliament has failed to convene an emergency session to examine the reasons behind the deteriorating security situation in the country this month, whereas the Shiite-led government believes — as Maliki has repeatedly suggested — that the sectarian project, led by neighboring countries, is designed to bring back the state of war between the sects in the country. In Iraq, however, many people believe that the ongoing differences would exacerbate tensions, and that unpleasant news awaits Iraqis if the situation persists.