The signing of the latest round of oil contracts in Iraq has been a victory for the Iraq-Kuwait detente, but comes at the cost of deteriorating relations with Turkey, writes Omar al-Shaher. 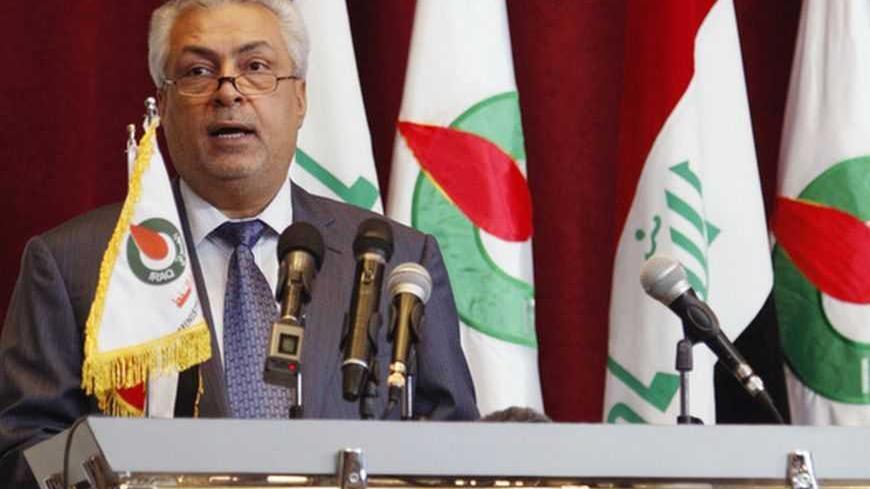 Iraq Oil Minister Abdul Kareem Luaibi addresses a news conference during the fourth licensing round for exploration blocks at the Oil Ministry's headquarters in Baghdad May 30, 2012. - REUTERS/Saad Shalash

Iraq has signed a final service contract with a consortium of two gulf companies, one of which is Kuwaiti, to develop the ninth of 12 exploration blocks included in the fourth round of licenses. The signing has completely ruled out a Turkish company that was part of the initial agreement in this investment.

While this contract reflects the improved economic relations between Iraq and Kuwait following years of animosity, it also shows the depth of the dispute between Baghdad and Ankara.

Iraq gave the Kuwait Oil Company and Emirati Dragon Oil the final rights to explore and develop an area estimated at about 900 square kilometers in the oil-rich southern city of Basra with a profit of $6.24 per barrel of oil equivalent. The move has ruled out a Turkish company that was part of the initial award of this contract.

The Iraqi Oil Ministry had signed a preliminary agreement last July with a consortium of companies consisting of the Kuwait Energy Company, Emirati Dragon and the Turkish TPAO to explore the ninth area, but the Turkish company was excluded under mysterious circumstances. The Iraqi Oil Ministry has refused to comment on the reasons behind the exclusion of the Turkish company from the deal, saying only that the decision was issued by the government, and that the ministry had nothing to do with it.

It seems that the strained relations between Ankara and Baghdad over the past year have affected Turkish investments in Iraq.

Turkey said that Iraqi Prime Minister Nouri al-Maliki is targeting Sunni Arabs in Iraq through the pursuit of their political leaders. For its part, Baghdad said that this is interference in the internal affairs of a sovereign country.

Abdul Mahdi al-Amidi, the official in charge of contracts in the Oil Ministry, said his ministry had nothing to do with the exclusion of the Turkish company.

Iraq organized the fourth bidding round to explore oil and gas fields at the end of May 2012, with the participation of 47 international companies. The round included 12 blocks, which consisted of seven oil blocks and five gas blocks in the provinces of Basra, Najaf, Babel, Muthanna, Diwaniya, Dhi Qar, Nineveh, Diyala and Anbar.

During this round, three blocks were given to the competing companies. Pakistan Petroleum won the contract to explore Gas Block 8, located between Diyala and Wasit, whereas Russian company Lukoil and Japan's Inpex Corporation won the contract to explore Oil Block 10, located between Dhi Qar and Muthanna provinces. The Kuwait Energy-led group — which included Emirati and Turkish companies — has the block located in the province of Basra on the Iraq-Iran border.

Mansour Abu Khamsin, chairman of Kuwait Energy, said that the contract signed with Iraq would open new opportunities for economic cooperation between the two countries. He said that “Kuwaiti companies are looking forward to increasing their activities in Iraq, by improving their relationship with the Iraqi Oil Ministry.” He added, “The way the Oil Ministry dealt with our company was more than excellent,” and added that the Kuwaiti-Iraqi companies must “set the cooperation between Kuwait Energy and the Oil Ministry as an example.”

Iraq-Kuwait ties have witnessed a significant improvement over the past few months, which  has resulted in a resolution of the most prominent controversial issue between the two countries, compensation for Kuwait for the damage that was inflicted by Iraq, after Saddam invaded Kuwait in 1990. In fact, a few days ago, Kuwait received $500 million as a settlement of the issue.