Netanyahu Sidelined on Iran By His Anti-Rouhani Speech

Israeli Prime Minister Benjamin Netanyahu, known as “Mr. Public Diplomacy,” in fact could not adequately handle the change in tone on Iran, and turned Israel into a marginal player in the current diplomatic process. 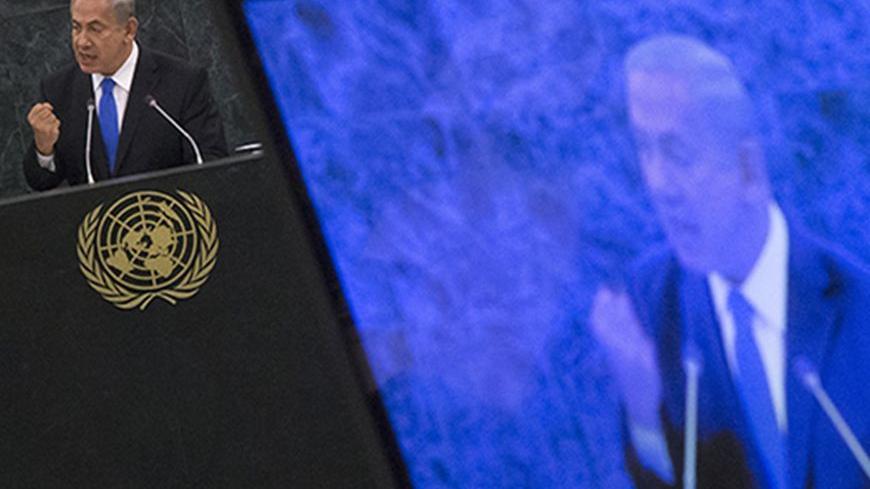 In the weeks leading up to his trip to New York, Prime Minister Benjamin Netanyahu devotedly prepared the fine details of the speech he would deliver before the UN General Assembly on Oct 1. At his request, he received intelligence — primarily technological — that shows Iran is only a few months away from achieving its goal of a nuclear bomb. Netanyahu’s goal was to publicly expose and shame Iran in the eyes of the world, so that the other nations would not be deceived by Tehran’s “smile offensive.”

Netanyahu writes his own speeches, especially when it comes to such an important speech, on a topic that stands at the top of his agenda as prime minister. He writes by hand, erases, changes, rewrites and so on until the result is satisfactory. The prime minister’s “bomb speech” at last year’s General Assembly, which he labored on for months, is considered a highlight of his long-standing public diplomacy campaign to stop the Iranian nuclear program.

When he began to work on the new speech, Netanyahu hoped to recreate that success. Unfortunately, last year’s successful rhetoric failed him this year. Netanyahu came prepared for the war that was, instead of the war to come. ''Rouhani didn't sound like Ahmadinejad,'' Netanyahu told the General Assembly, ''but when it comes to Iran's nuclear weapons program, the only difference between them is this: Ahmadinejad was the wolf in wolf's clothing. Rouhani is a wolf in sheep's clothing."

These are indeed sharp words, but they are spoken at a time when the United States and Iran are both offering historic diplomatic gestures to one another, hoping to restore trust between the sides, so that the new diplomacy of Iranian President Hassan Rouhani, with its conciliatory tone, has made Israel’s public relations ammunition irrelevant and ineffective.

Netanyahu thinks of himself as someone who is closely familiar with US politics. The many years he lived in the United States, when he represented the state of Israel as deputy chief of mission in Washington and as the Israeli ambassador to the UN, made him one of the most skilled advocates for Israel in that country. But the latest events at the assembly in New York prove that, this time, "Mr. Public Diplomacy" failed.

The prime minister did not read the map correctly as he prepared for his trip, and did not fully understand the effectiveness of the Iranian move, which necessitated a new direction for Israel’s public diplomacy. While Iranian President Hassan Rouhani worked to soften Western media with interviews and articles that included conciliatory messages and expressed willingness to enter negotiations, Netanyahu remained stuck in the old tactics. Even after Rouhani’s assembly speech on Sept. 24, Netanyahu did not grasp the change, and his office released a sharp communique, according to which Rouhani's words were a big facade of lies and hypocrisy.

Netanyahu suffered from diplomatic blindness even as he boarded the plane in Israel on his way to New York. He continued to use the same aggressive rhetoric, even after hearing about the historic phone conversation between the presidents of the United States and Iran. Thus, Netanyahu gave the impression that, come what may, he is interested in a military strike against Iran. He failed to understand that global public opinion is uninterested in another violent conflict — which is evident from the diplomatic negotiations that prevented a Western strike in Syria.

And so Netanyahu landed in the United States in an inferior position. Rouhani set the tone, the international atmosphere was on his side, the world agreed to give him a chance and to listen to him and Netanyahu seemed like a marginal player, who is struggling to maintain his past glory. Even at this point, no change was made in the public diplomacy strategy.

Netanyahu’s worldwide media blitz of the last few years was very convincing, and could easily be considered one of the main factors leading to the severe economic sanctions on Iran. At this point, all he had to do was to deploy the right public diplomacy to take credit for the extreme change of tone coming from Tehran — even without discounting the possibility that this is an attempt to distract and delay the road to military nuclear capability.

When the other side declares a change in direction, even if it is only lip service, and the leader of the free world is prepared to listen to it, Netanyahu has a responsibility to fit himself into the new situation. But similar to Israel’s political arena, in international diplomacy, too, Netanyahu works virtually alone. His office has gradually emptied of experienced advisers who could have helped him reach the right decision.

In the last few days, Netanyahu’s associates continued to brief journalists using the same overused rhetoric and explained that nothing would cause the prime minister to change the primary message of his speech. Even after his meeting with US President Barack Obama, when the US president clarified that he intends to begin talks with Iran, the Israeli delegation explained that the meeting did not change the plans for Netanyahu’s UN speech. According to them, it only heightened the need to explain to the world that Rouhani's smiles are simply a facade.

But even if the essence of this is correct, it is clear that whoever formulated the Israeli messages did a terrible job. It was possible to praise the change in Iran’s tack, claim it as a result of Netanyahu’s successful struggle and simultaneously continue to emphasize Israel’s might and commitment to defending itself at any price and under any condition. Netanyahu would thus have become a relevant player in the current situation, and have been cast as a levelheaded and rational leader who does not advocate war in any and all circumstances.

Moving toward a time-limited diplomatic path does not harm Israel’s security. It makes it possible to reveal the Iranian plot to the whole world — in the case this is a matter of empty words used as a delaying tactic. And maybe, in the optimistic scenario, it could even achieve positive results for Israel and the world.