Israel Should Put Rouhani to Test

Instead of denigrating the new foreign policy of Iranian President Hassan Rouhani, Israel should put him to the test and demand concrete, confidence-building action. 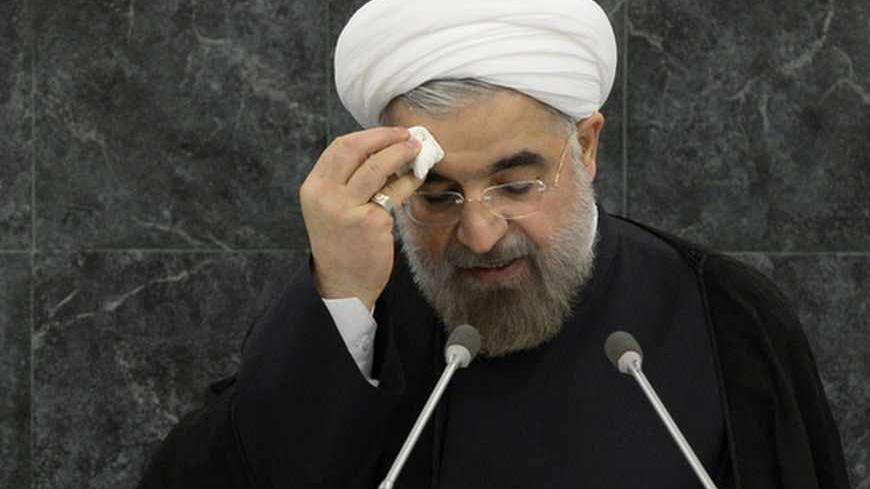 Michael Doran is a researcher specializing in international relations and a former member of President George W. Bush’s National Security Council. This week, on Sept. 23, he was asked during a public event in Washington whether Iran’s new tone really marks the dawn of a new era in the region. Doran responded by describing his own “Iranian experience,” when Bush’s team was tackling the same issue: Is Tehran really interested in peace and compromise, or is it all a ruse?

Doran told how messages started arriving from representatives in Europe and a wide range of journalists, who stubbornly attacked the Bush administration, insisting that the Iranians were serious, that they were interested in talking and resolving all differences peacefully. This was during the presidency of Mohammad Khatami. Everyone who carried these messages, Doran said, urged the administration to open a secret channel of communication with Iran because, according to their assessment, the Americans would be surprised at how far the Iranians were willing to go.

Doran recalled a meeting with President Bush, who asked how serious the missives really were and whether they could be put to the test. The most sensible proposal came from Elliot Abrams, the National Security Council’s senior director for Near East and North African Affairs. He suggested sending a countermessage to Tehran stating that if Iran did something to prove its good intentions and how serious it was, the United States would delay its condemnations of it and other moves against the country at the UN Security Council. As Doran tells it, the Iranians suddenly went silent. “We didn’t hear another word from them, or from the Europeans who tried to mediate between us.”

Could this story from the Khatami era inform us about the current Iranian move? Perhaps, but the conclusion is nonetheless the same: Don't automatically refuse to listen to conciliatory words from the Iranians, as Israeli Prime Minister Benjamin Netanyahu has, but ask them to back up their words with deeds. In the following example, however, in which Rouhani was put to his first practical test, he failed.

Standing before the UN General Assembly, the Iranian president sent a message to President Barack Obama, who had preceded him at the podium: “We can arrive at a framework to manage our differences. To this end, equal footing, mutual respect and the recognized principles of international law should govern the interactions.” Everyone then waited for the two men to meet and shake hands since this would have been an active expression of the new, conciliatory tone. As soon as Rouhani was expected to take a tangible step forward, however, he instead took a step backward. He did not extend his hand to Obama and did not seize the opportunity to move from words to the first step of a dialogue.

Most pundits described Rouhani’s speech as conciliatory. Netanyahu, however, called it, “a cynical speech, full of hypocrisy.” The prime minister then added, “It is good that the Israeli delegation wasn’t sitting in the hall, since that would have granted legitimacy to a regime that denies the Holocaust and calls for the destruction of the State of Israel.”

Shortly after Netanyahu’s response was released, Christiane Amanpour interviewed Rouhani on CNN. During the discussion, Rouhani stated quite clearly, “But in general I can tell you that any crime that happens in history against humanity, including the crime the Nazis created toward the Jews, is reprehensible and condemnable.” With this statement, Rouhani was not only defiant, but also openly critical of his predecessor, Mahmoud Ahmadinejad.

Let’s assume for a moment that Netanyahu is right in his consistent approach — that nothing matters, that the Iranian leader’s tone, smile, and conciliatory words do not change a thing — because it is all just an attempt to buy time for Iran’s nuclear weapons program. Even then, the Israeli media's attitude, which worked well for Netanyahu in the case of Ahmadinejad, is an outdated way to win public support when confronting the new Iranian president. It is legitimate, and even desirable, for the Israeli prime minister to be dubious and suspicious. Netanyahu should stick to his guns to eliminate the threat of nuclear weapons being developed by Tehran. Nevertheless, if he wants to maintain the same strategy, he should also shift gears and adopt new tactics more appropriate for his new nemesis.

“Don’t be right; be smart!” No axiom is more worn and overused than that one. In Netanyahu's case, one must say, “Even if he is right, he must be smart.” One thing that Bush and Obama have in common is that neither of them rejected the “new music” coming out of Iran out of hand. Neither of them was quick to claim, not then or today, that it was all a sham or some kind of fraudulent effort. The two administrations were wise enough to accept the new tone, while at the same time demanding actions to prove its reliability. If Netanyahu wishes to continue his battle against Iran's nuclear program without remaining isolated, he must use the appropriate terminology for the Rouhani era while keeping and radiating an updated appearance.