What is Obama's secret weapon against Bibi?

It’s hard to understand why President Barack Obama doesn’t translate the criticism of Prime Minister Benjamin Netanyahu’s congressional speech into action, such as hinting at a change in his position on the Israeli nuclear program. 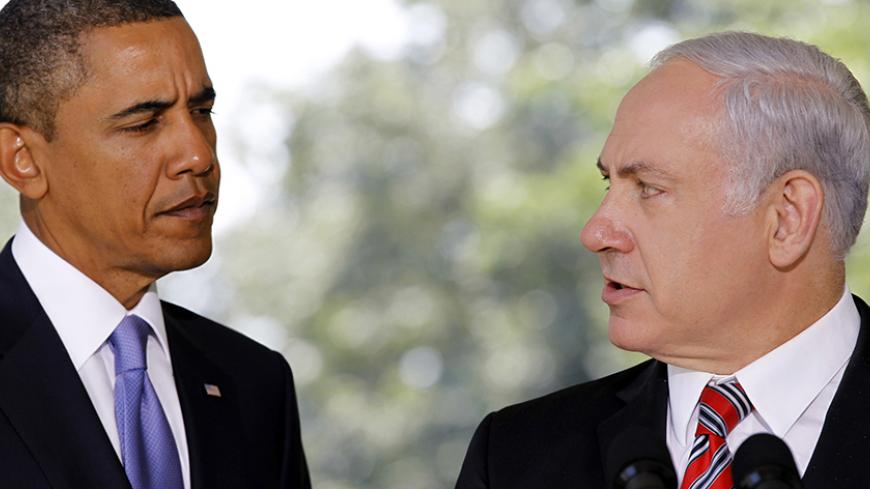 US President Barack Obama (L) listens as Israeli Prime Minister Benjamin Netanyahu delivers a statement to the media from the Colonnade outside the Oval Office of the White House in Washington, Sept. 1, 2010. - REUTERS/Jason Reed

Judging by recent polls, the slings and arrows from US officials at Prime Minister Benjamin Netanyahu on the issue of his congressional speech set for March 3 will not wipe out his political career. A Channel 10 poll shows that 38% of the Israeli public supports the controversial speech — a percentage similar to those opposing the move. It’s important to note that the survey was conducted even before Netanyahu demonstrated his rhetorical skills in articulate American English, generating bursts of applause from the congressional floor and gallery. Obviously, he is also expected to pull a rabbit out of his hat, which will make an impression on audiences at home. Even the optimistic members of the Zionist Camp are not counting on the noisy crisis Netanyahu has caused in Israeli-US relations to pave the way for its leader, Isaac Herzog, to the prime minister’s office.

More than 22 years ago, a similar crisis in the relationship between an American administration and an Israeli prime minister actually contributed to a change of government in Jerusalem. On the eve of the elections for the 13th Knesset, a stormy dispute broke out between Prime Minister Yitzhak Shamir and Republican President George Bush, Sr. over a freeze of West Bank settlement construction as a condition for US financial aid. Bush was furious at Shamir, who tried to enlist the Democratic majority in Congress to force the administration to acquiesce to Israel’s request for $10 billion in US guarantees to help absorb the massive wave of immigration from the former Soviet Union. Shamir claimed at the time that the US pressure constituted interference in the Israeli election campaign. Bush’s decision to no longer make do with recriminations and protests and to wave the weapon of aid was apparently one of the elements that tipped the scales in favor of the Labor Party, headed by Yitzhak Rabin.

Unlike Bush in 1992, President Barack Obama is now unfettered by electoral considerations and the need to please Jewish backers and donors. It is therefore hard to understand why the president does not translate Netanyahu's criticism from words into deeds. Why does he holster the most effective weapon he has at his disposal for dealing with the confrontation over Iran's nuclear activities and in the battle over Israel’s future government? A senior Israeli official told Al-Monitor on condition of anonymity that according to estimates, if Obama were even to hint at an intention to make use of this weapon, Netanyahu would not have dared provoke him.

This is no secret weapon. Its elements are detailed in the president’s speeches and in speeches at the UN and the International Atomic Energy Agency (IAEA). All Obama has to do is to make good on his public commitments and to honor the decisions of these august international institutions regarding global nuclear disarmament. This issue has been at the top of his agenda ever since his first days in the White House. In September 2009, he initiated a historic resolution in the UN Security Council to curb global nuclear arsenals and to prevent the proliferation of nuclear weapons. For the first time since the UNSC was established in 1946, an American president chaired the session with the participation of the heads of all the member states.

Two weeks later, the Nobel Peace Prize Committee announced that Obama had been awarded the prize, explaining that it “has attached special importance to Obama's vision of and work for a world without nuclear weapons.” At the awards ceremony in December 2009, Obama declared, “Those who claim to respect international law cannot avert their eyes when those laws are flouted. Those who care for their own security cannot ignore the danger of an arms race in the Middle East or East Asia.”

Which states in the Middle East and East Asia exempted themselves from the rule of law and international consensus regarding nukes? Israel, India, Pakistan and North Korea are the only countries that have not signed the Nuclear Non-Proliferation Treaty (NPT).

An IAEA conference held in September 2014 adopted a resolution by a sweeping 117 votes to none calling on all the countries in the Middle East to join the NPT and work under IAEA supervision. The decision obliges the IAEA’s director-general to report each year on progress toward its implementation. Although Israel was not mentioned by name, it is the only state in the region that is not an NPT signatory.

The US representative at the IAEA General Assembly, Laura Kennedy, announced less than six months ago that the United States remains “deeply” committed to convening the Helsinki Conference on Nuclear Disarmament in the Middle East. Shortly before, on Aug. 15, UN Secretary-General Ban Ki-moon called for the conference to be convened by the end of 2014. He claimed that the stability of the NPT could be undermined if the conference is not convened by the time the five-year review of the treaty takes place this coming spring.

The Helsinki Conference was actually scheduled for December 2012. But despite Iran announcing its decision to attend — or perhaps because of that — the US administration postponed the conference with a vague explanation. An Israeli official involved in contacts ahead of the conference told Al-Monitor on condition of anonymity that the real reason was that Obama had given in to Netanyahu’s entreaties. On March 3, Obama will get a taste of Netanyahu's gratitude for his support of Israel’s nuclear policy, as well as for the generous military and diplomatic aid that he provides Israel — in the virtual form of a public slap in the face.

Instead of reserving a place for Netanyahu in the history books as a leader who stopped Iran’s nuclear program, Obama has the power to oust him from the premier's residence at Balfour Street, as the leader who cost Israel its policy of nuclear ambiguity and exclusivity — according to foreign sources — in the Middle East. Netanyahu traveled to Washington to convince Israeli voters that he is the only man in the world capable of stopping the Iranian nuclear bomb. Obama might be the only man in the world who can stop Netanyahu from scoring another victory. Apparently, all Obama would have to do is to issue a veiled hint that he welcomes the proposal put forth by Iranian President Hassan Rouhani, according to which, once an agreement is reached between Iran and the six world powers, the Middle East will be declared a zone free of weapons of mass destruction, including nuclear ones.