The Israeli government can't admit that the nuclear agreement with Iran is being successfully implemented or Israel itself might have to face similar requirements. 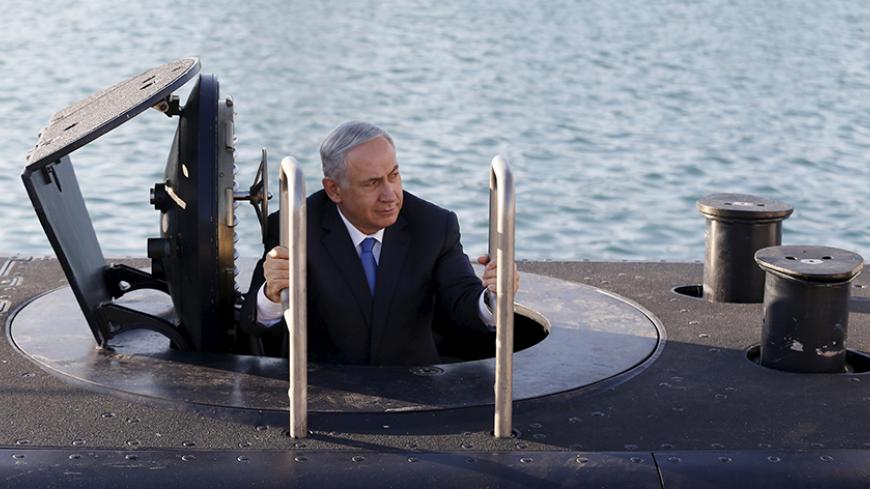 Israeli Prime Minister Benjamin Netanyahu after a visit inside the Rahav, the fifth submarine in the Israeli navy's fleet, Haifa port, Israel, Jan 12, 2016. The Dolphin-class submarines are widely believed to be capable of firing nuclear missiles. - REUTERS/Baz Ratner

One may say that Israeli Defense Minister Avigdor Liberman is crass, radical and cynical, but one absolutely cannot accuse him of stupidity, naivete or negligence. The announcement condemning the president of the United States that Liberman demanded his ministry's spokesman (and not, as is customary, his own media adviser) issue on Aug. 5 was no slip of the tongue. A seasoned politician like Liberman surely knew that the mere mention of the Munich Agreement with Hitler would stir the media out of its weekend doldrums. And indeed, Munich did the job. The defense minister as well as the prime minister then apologized for the style, but not for the message.

The half-hearted apologies provided them an opportunity to reiterate their message: that the agreement signed with Iran a year ago is not worth the paper it’s written on. A clarification issued by the Defense Ministry read, “Israel remains deeply concerned by the fact that even after the agreement with Iran, the Iranian leadership continues to declare that its central goal is the destruction of the State of Israel and continues to threaten Israel’s existence with words and deeds.”

Prime Minister Benjamin Netanyahu said Aug. 5 that Israel’s position on the Iran deal ''remains unchanged.” Its stance is that the Iranians were and still are a gang of con men whose signature means nothing. Liberman praised the United States and the president “for their tremendous contribution to Israel’s national security.” Netanyahu was careful to sign off with, “The prime minister firmly believes that Israel has no more important ally than the United States.” It almost goes without saying that important allies don’t prevent each other from equipping themselves with the best means of deterrence and warfare.

Israel’s political echelon cannot ignore the declaration by the US president that the agreement “has worked exactly the way we said it was going to work.” Obama was right in saying recently, “That would be a shock. … If some of these folks who had said the sky is falling suddenly said, 'You know what, we were wrong and we're glad that Iran no longer has the capacity to break out in short term and develop a nuclear weapon.'”

An admission by the prime minister of Israel or the defense minister that they were wrong is not “a shock.” It’s an earthquake. Israeli recognition of the fact that Iran does not have the capacity to produce nuclear weapons is the sky falling on Israel’s entire defense perception.

If Iran’s nuclear threat has dissipated, why does Israel need the hundreds of nuclear bombs it has (according to foreign sources)? If there’s no nuclear threat on the horizon, there’s no need for nuclear deterrence. Why does Israel deserve to be the only country in the Middle East exempted by the United States from joining the Nuclear Non-Proliferation Treaty (NPT)? On the day Israel concedes its mistake regarding the nuclear agreement with Iran, what reason would the United States have for maintaining Israel’s “qualitative military advantage” — a laundered way of saying that it protects Israel’s nuclear policy? Not only that, but if the threat has indeed been eradicated, as the president says, there’s no reason to keep boycotting Iran.

Since his 2009 call to rid the world of nuclear weapons speech at the start of his presidency, and up to his dramatic visit to Hiroshima in May of this year, Israel has been anxiously following Obama’s nuclear policy. Speaking in Hiroshima, the site of a nuclear bomb, the president urged “nations like my own that hold nuclear stockpiles" to "have the courage to escape the logic of fear and pursue a world without them.” He pointed a finger at all nations, without exception.

On the other hand, following Israeli-Jewish pressure, Obama shelved his initiative to convene a December 2012 conference in Helsinki to promote a Middle East free of nuclear weapons under the auspices of the United States, Russia and the United Kingdom. Instead, the United States joined Israel, Canada, Micronesia, the Marshall Islands and Palau — the only UN member states to vote against a resolution calling on Israel to immediately adopt the NPT and open up its nuclear facilities to inspections by the International Atomic Energy Agency. Obama was worried that a clash with Israel on the nuclear issue would derail negotiations with the Palestinians. Either way, the forecast that Obama would force Israel to change its nuclear policy was proven wrong.

Several recent reports say Jerusalem is preparing for the possibility that Obama will take advantage of the twilight period between the November presidential elections and the passing of the White House torch on Jan. 20 to drop a new initiative on Netanyahu for resolving the Israeli-Palestinian conflict. Obama could also take advantage of his remaining months in office to justify the 2009 Nobel Peace Prize awarded to him for his promotion of a world without nuclear weapons. Having eliminated the Iranian nuclear threat, so he says, what would be more natural than dealing with the Israeli nuclear program?

If that happens on a day after Democratic nominee Hillary Clinton wins the presidency, she will not be able to complain that Obama foisted on her a policy opposed to her worldview. As secretary of state, Hillary Clinton was a pledged partner in Obama’s non-proliferation vision of the world. Speaking at a 2010 New York Review Conference on the NPT, Clinton said, “We support efforts to realize the goal of a weapons of mass destruction-free zone in the Middle East. … The Middle East may present the greatest threat of nuclear proliferation in the world today.” Clinton argued, "Iran is the only country represented in this hall that has been found … to be currently in noncompliance with its nuclear safeguards obligations — the only one.” Today, the president of the United States has determined that Iran is compliant with its commitment under the treaty, while Israel is resolute in its refusal to sign it.

One can assume that like her predecessor and husband, Clinton, if elected, will be in no rush to jump into Israel’s heavy water and splash her Jewish supporters.

Meanwhile, Donald Trump doesn’t even understand why a country that has nuclear weapons can’t use them. If the Republican candidate becomes the commander in chief of the US Armed Forces, rest assured that champagne corks will be popping in Dimona.