Putin, Obama Should Team Up For WMD-Free Mideast

The channel opened between the United States and Russia to resolve the Syrian chemical-weapons crisis could provide leverage for ridding the Middle East of all non-conventional weaponry. 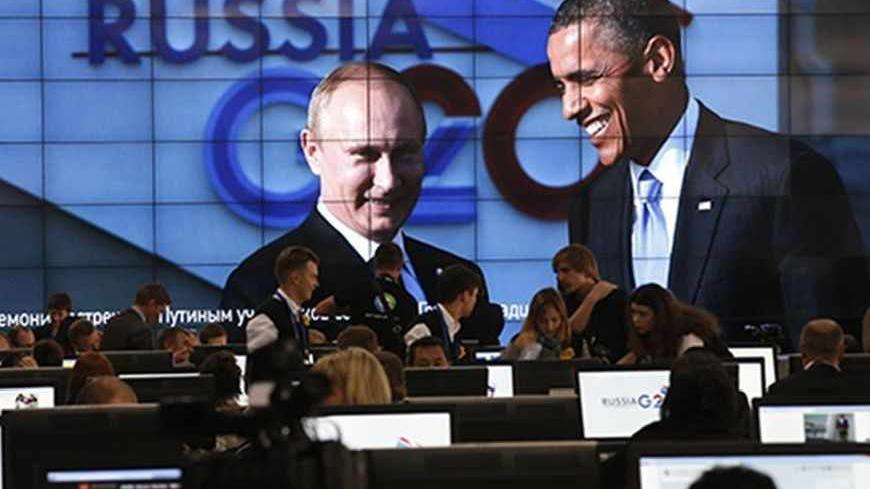 Russian President Vladimir Putin and US President Barack Obama are pictured on a video screen installed in the press center of the G20 Summit near St. Petersburg, Sept. 5, 2013. - REUTERS/Grigory Dukor

When US President Barack Obama latched onto the proposed Russian compromise to back off his Syrian attack plans, he was acting in accordance with the ancient Jewish saying, “When you need a thief, take one down from the gallows.” Just a few weeks ago, on Aug. 8, the US president canceled a meeting with Russian President Vladimir Putin that was to take place at last week’s G20 summit as “punishment” for his Russian counterpart’s decision to provide political asylum to Edward Snowden, who leaked classified information about the US National Security Agency’s surveillance programs.

Russia’s steadfast support of the Bashar al-Assad regime, along with that of Iran and Hezbollah, was reminiscent of the bad old days when the Middle East was a central arena in the cold war between the United States and the Soviet Union. And now, overnight, Putin has turned from war monger to Obama’s guardian angel. On the other hand, it’s safe to assume that absent the US threat to attack Syria over Russia’s head, Putin would not have volunteered to extricate Obama at home from a controversial military adventure and from the international portrayal of the United States as an isolated and toothless giant.

Obama would be shirking his moral duty if he fails to enlist Russia in the effort to find a comprehensive political solution to the crisis in Syria. The Russian compromise formula for the destruction of Syria’s chemical-weapons arsenals cannot provide an approval stamp for attacks on population centers using cluster bombs and “ordinary” rockets. The 2009 Nobel Peace Prize laureate would not be fulfilling his diplomatic-defense duty if he did not make use of the US-Russian channel for a decisive handling of the uncontrolled proliferation of all types of weapons of mass destruction — first and foremost by cleaning up the Middle East.

The Nobel Committee explained that its decision was based on Obama’s vision and activity toward a nuclear-free world. That work reached its peak on Sept. 23, 2009, when Obama himself initiated and conducted a special session of the UN Security Council dedicated to the issue of nuclear weapons. At the heads-of-state meeting, held for the first time in history with the attendance of the president of the United States, Obama declared that the unanimous decision “reaffirms our joint commitment to a world free of nuclear weapons.”

What has happened since? Nothing. At the October 2010 conference in New York on the safeguarding of nuclear facilities and nuclear materials around the world, with the participation of representatives from 47 states, Obama called on all countries of the world to join the Nuclear Non-Proliferation Treaty (NPT). Despite objections from Israel, which refuses to sign the treaty, the US president agreed to Egypt’s demand to convene a conference on demilitarizing the Middle East of chemical, biological and nuclear weapons and missiles. The conference, which was due to take place in December 2012 in Helsinki under the auspices of the United States, Russia and the UK, was supposed to report on preparation for the 2015 NPT conference.

In November 2012, the US State Department spokesperson announced the indefinite postponement of the conference. She explained the move by citing an absence of agreement on the part of countries in the region on conditions for holding the conference. Concurrently, Moscow issued a statement calling for the conference to be convened, based on its original mandate, no later than April 2013. What has happened since? Nothing.

By the way, I don’t remember the many Israeli politicians and pundits who recently decried Obama’s “loss of credibility” for his restraint over the use of chemical weapons in Syria complaining about the damage to US credibility caused by the postponement of the demilitarization conference. Does this have anything to do with Israel’s refusal to ratify the treaty for the non-proliferation of chemical and biological weapons and its ambition to preserve its hegemony in the realm of nuclear weapons? According to foreign reports, of course it does.

The Syrian chemical-weapons crisis should serve as a warning against neglecting the proliferation of weapons of mass destruction in the Middle East. The dialogue with Russia over the resolution of the crisis should serve as leverage for the abolition in the region of all these kinds of weapons. For that to happen, the US administration must treat Russia as a full partner in the major processes in the Middle East and take its interests in the region into account.

In a study issued Aug. 13 by Israel’s Institute of National Strategic Studies, Israel’s former ambassador to Russia and the Ukraine, Zvi Magen, wrote that Russia recognizes that the United States is losing its initiative and even interest in the Middle East. Nonetheless, Magen notes that the Russians sense that the Americans left them out of the renewed negotiations between Israel and the Palestinians.

The Russian feeling is not totally baseless. Ever since the Soviet Union served in 1991 as co-sponsor with the United States of the Madrid Conference for resolution of the Middle East conflict, the United States has turned Russia (as well as the European Union and the United Nations) into extras in the Middle East peace process. The Americans abandoned the multilateral track opened in Moscow pursuant to the Madrid Conference, including a committee for nuclear weapons control in the Middle East, in which the Soviet Union also served as co-chair along with the United States. The United States occasionally throws Moscow a dry bone, such as the Quartet’s September 2011 decision — which has not been implemented to this day — to convene a follow-up conference in Moscow on the negotiations between Israel and the Palestinians.

Putin’s behavior in the international arena in general, and regarding the United States in particular (see the Snowden affair), shows that the Russian president is intent on serving as the leader of a world power and restoring Russia’s ancient glory. That said, the need to keep developing the Russian economy and compete with the West and China do not allow Moscow to burn its bridges to Washington and to call it quits. The severe side effects of the Arab Spring, along with Israel’s war drums vis-à-vis Iran, present both nations with the challenge of halting the non-conventional arms race in the Middle East by promoting a non-conventional regional peace initiative.