A network of young strategists from across the region sees new opportunities for the elimination of weapons of mass destruction.-- 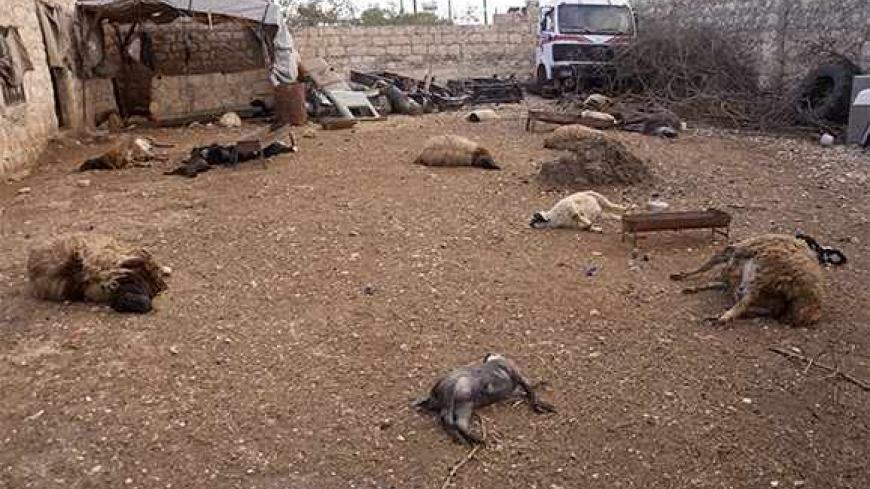 Animal carcasses lie on the ground, killed by what residents said was a chemical weapon attack, in Khan al-Assal area near the northern city of Aleppo, March 23, 2013. - REUTERS/George Ourfalian
November 1, 2013

Concerns over the proliferation and use of weapons of mass destruction (WMD) in the Middle East have dominated the discussions on the region for decades. However, new developments on the governance of these weapons in the region have been unfolding.

The Iranian government under President Hassan Rouhani has signaled willingness to resolve regional and international concerns regarding its highly controversial nuclear program through enhanced diplomatic relations with the United States, and negotiations are underway. The Syrian government’s signing of the Chemical Weapons Convention on Oct. 14, to dismantle its chemical weapons arsenal, and the ongoing process of implementing this historic decision through the United Nations have brought new hope that the elimination of WMD from the region is possible. The positive steps taken by Syria have inspired some in Israel to voice their support for the ratification of the Chemical Weapons Convention. These events have turned the spotlight on the already four-decades-old call to free the Middle East from all WMD.

The Middle East WMD-Free Zone initiative enjoys continuous support in principle from all regional states, but has yet to materialize. In an attempt to push it forward, the 2010 Review Conference of the Nuclear Non-Proliferation Treaty called for convening a conference on establishing a zone free of WMD in the region. The conference was scheduled to take place in 2012, but did not convene due to opposing views among regional states about the agenda and outcome as well as the poor timing, given the ongoing turmoil in several regional countries.

The Syrian chemical weapons dismantlement and negotiations with Iran could serve as catalysts for renewed optimism on the viability of the establishment of the WMD-free zone. On the diplomatic front, the designated Finnish facilitator for the Middle East WMD-Free Zone Conference, Undersecretary of State Jaakko Laajava, undertook consultations in Switzerland on Oct. 21, in an attempt to find agreement between regional parties on convening it. The fruitfulness of the consultations — surprisingly attended by all regional parties — indeed constitutes an encouraging step toward the establishment of a WMD-free zone in the Middle East.

Despite these positive developments and valuable attempts to break through the stalemate, many continue to view freeing the Middle East of WMD as an unattainable dream. Undeterred by such views, a group of emerging arms control specialists from the region think more can and should be done.

Believing in the possibility of having a real dialogue in the region and determined to contribute to it, this group met to simulate the Middle East Conference on a WMD-free zone and set out to test the viability of an agreement. On Oct. 17, specialists from Egypt, Iran, Iraq, Israel, Jordan, Saudi Arabia, Turkey and the United States commenced the simulation with ceremonial opening statements presented by the participants on behalf of the regional states they represented. They delineated their stances on a WMD-free zone and the process leading to its establishment. While statements were based on the real positions of regional states, the participants attempted to be as constructive and creative as possible. The simulated conference was assumed to be held in Helsinki in 2013 and conducted under the assumption that all regional states were attending in good faith and intending to achieve a consensus. Participants succeeded in negotiating an outcome declaration that — in their view — could be approved by their respective capitals. Would their ability to reach an agreement resonate? Does it indicate that the real conference could be a success?

Throughout the simulation, the traditional axes of conflict in the region — some more obvious, some obscure — as well as particular differences in positions regarding arms control and regional security — underlined the endeavors to reach a negotiated outcome. While keeping in mind their states’ national security interests and positions, participants carefully compromised where possible to reach an agreement. As in real international negotiations, rivals and adversaries did not directly converse or cooperate, yet they communicated indirectly through allies and intermediaries. Beyond regional intermediaries, the presence of the United States and the Russian Federation had a significant positive effect on reaching consensus. This realistic yet constructive framework enabled the attainment of an outcome declaration that was agreeable to all parties.

The grand bargain achieved in the negotiations was reflected in three operative paragraphs: deciding to establish two working groups, one on arms control and another on regional security, which will operate by consensus; having a clear timeline to start meetings; and, deciding to convene a follow-on conference to assess the findings of the working groups and decide on the next steps. In principle, this met the Arab states’ objective to address WMD in a structured process and corresponded to Israel’s view that discussing WMD issues must be directly connected with discussing wider security concerns. To bring Iran and the Arab states — which oppose normalization with Israel — on board, language on confidence-building measures was toned down with regard to the mandate of the regional security working group. On the arms control working group front, Iran insisted on reducing the intensity of the language on enforcement and compliance.

The delicate process of wording the declaration to make it agreeable to all was based on recognizing the parties’ relevant concerns, and how they can be mutually and reciprocally satisfied. Intent on reaching compromise, and working under the assumption that no party is attending the conference as a spoiler to the process, participants had to engage in manifold balancing acts, juggling commitment to national interests and the vital wish to reach an agreement. Recognizing shared interests beyond lines of contention was tricky, but meaningful in compelling flexibility: Arab parties, for instance, agreed to have the envisaged working groups operate by consensus rather than by majority, to keep Iran and Israel on board — both of which had an interest to avoid overriding the Arab majority by adopting a consensus-based decision-making.

The group produced a declaration that touches upon all major areas of contention in arms control, nonproliferation and disarmament debates in the Middle East. Participants in the simulation worked through and around these issues and succeeded in reaching an agreement. While recognizing the complexity, difficulties and pressures of the real-world process and understanding well the gravity of the issues at stake for all regional parties, the specialists hope that the declaration they succeeded in attaining during the simulation could serve to motivate their countries’ negotiators and policymakers. They are in the process of launching a petition to galvanize public support. Their successful cooperative endeavor was an exceptional learning experience that has inspired them to continue working toward the development of arms control and regional security.

The authors are members of the Middle East Next Generation of Arms Control Specialists Network, established in 2010 by Chen Kane at the James Martin Center for Nonproliferation Studies.

Ala Alrababa’h is a student at Dartmouth College in Hanover, New Hampshire, and a former Davis Fellow at the James Martin Center for Nonproliferation Studies.

Nilsu Goren is a Graduate Fellow at the Center for International and Security Studies at Maryland and Ph.D. student at the University of Maryland's School of Public Policy.

Karim Kamel is a graduate of the Monterey Institute of International Studies and former consultant to the Comprehensive Nuclear Test-Ban Treaty Organization.

Aviv Melamud is a research associate and Ph.D. student at the Peace Research Institute Frankfurt.

Ariane Tabatabai is a Stanton Nuclear Security Fellow at the Belfer Center for Science and International Affairs, Harvard Kennedy School; a research associate at the James Martin Center for Nonproliferation Studies and Ph.D. student in the Department of War Studies at King's College London.