Russia-Israel Ties in Spotlight In Wake of Syria Deal

The Helsinki conference on a nuclear-free zone in the Middle East will be a window into the state of Russia-Israel relations. 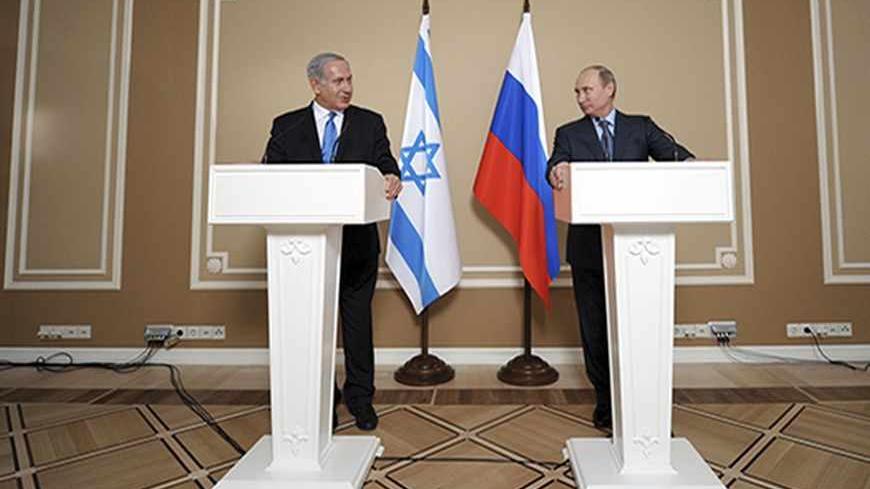 Among the confidential documents declassified by the Israeli State Archives on the 40th anniversary of the Yom Kippur War is a fascinating letter sent in September 1972 by Prime Minister Golda Meir to German Chancellor Willy Brandt. In the document, which for some reason has not attracted much attention, Meir refers to the decision by Egyptian President Anwar Sadat in July of that year to expel the 20,000 Soviet advisers from his country. Meir wrote that the Russian presence in Egypt was to prepare the army for a war with Israel, but that Sadat may have thought it would also force the United States to cooperate with the Soviets in pressing Israel to agree to a diplomatic solution on “Egypt’s terms” (i.e., withdrawal from territory Israel captured in the 1967 war). Meir assumed that with the departure of the Soviet advisers, “the grounds for the realization of these options have greatly diminished.”

The ouster of the Russian bear lifted the threat of war and the danger of peace from Meir’s shoulders. Today, as well, the average Israeli and the common politician rank Russia at the bottom of Israel’s fan club, between the European Union and the Arab states.

Anyone who protects Syrian President Bashar al-Assad, sells missiles to Iran and provides asylum to a fellow who angers Uncle Sam cannot be considered a “true friend.” For years, Israel has been addicted to American weapons and to its veto power and also to the political game in which the Israeli tail wags the American dog. But after many years of US dominance as the only world power, Israel will have to get used to the new-old situation created by the Arab Spring — a reality in which there is more than one sheriff running the town.

The appointment of Avidgor Liberman, a native of Moldova, as foreign minister [2009–2013] in the second Benjamin Netanyahu government stirred hope that Israel might be able to draw closer to Moscow and perhaps even reduce its dependence on the United States under the leadership of President Barack Obama. The Netanyahu government decided to invest special effort in enlisting Moscow’s help in attempts to block Iran’s nuclear program and to thus maintain Israel’s hegemony in this area (according to foreign sources).

A cable sent in the summer of 2010 by the US Embassy in Moscow to the State Department in Washington (and exposed in the WikiLeaks documents) describes the signs of the honeymoon between the Netanyahu government and the Russian administration. An Israeli diplomat who took part in meetings conducted by Liberman in June of that year in Russia reported, “The visit reinforced the impression that Liberman is one of them. … The meetings were conducted in Russian and in a friendly atmosphere. … The leaders exchanged cigars and shared stories about Moscow ‘in the old days.’” The document reported further that Russian Foreign Minister Sergey Lavrov made clear to his Israeli counterpart that the S-300 missile deal with Iran had been canceled and that Russia had no intention of supplying weapons that could tip the balance of power in the Middle East. Lavrov even announced that Russia would ''get in line'' with the sanctions against Iran. As we well know, none of this materialized.

When Liberman visited Moscow after Russian legislative elections [in December 2011], he repaid President Vladimir Putin for the cigars by announcing that “based on reporting from Israeli observers at polling stations in Russia, the elections were free, fair and democratic.” Senior officials at the Foreign Ministry in Jerusalem claimed that Liberman’s statement did not coincide with reports about the validity of the elections received from the Israeli Embassy in Moscow.

Liberman’s gesture does not appear to have left a lasting impression on Putin. Before he even finished carrying out a root canal on the Syrian chemical weapons arsenal, the Russian president had already started digging into Israel’s nuclear weapons. After Syria, Russia’s baby, came Israel’s turn, the US baby. On Friday, Sept. 20, Russia was among the 43 states that voted at the annual conference of the International Atomic Energy Agency (IAEA) in favor of a resolution put forth by Arab states calling on Israel to join the Nuclear Non-Proliferation Treaty (NPT). The resolution also stated that Israel must place its installations under UN supervision. The United States was among the 51 states that voted down the resolution.

The conference on the demilitarization of the Middle East, initiated by President Barack Obama at the start of his first term, is due to be held in Helsinki in December. Russia had protested against Obama's decision to postpone the conference at the very last minute, which was due to have taken place in December 2012 under the auspices of the United States, Russia and the United Kingdom. The delay was designed to prevent the embarrassment that would ensue in having an empty Israeli chair at the conference hall across from the seat of the Iranian representative, who had already confirmed his participation.

Israel now fears that the Russian president, buoyed by the waves of his success in the Syrian crisis, will not allow another postponement of the conference. In an attempt to prevent potential embarrassment — this time vis-à-vis Iran under the leadership of a president who is aiming for dialogue with the West and does not talk about destroying Israel — Jerusalem will try to enlist support for a proposal determining that decisions at the conference will only be reached by consensus. The proposal is designed to overcome the numerical advantage of the Arab-Islamic bloc.

In Dec. 2012, the UN General Assembly adopted almost unanimously a resolution calling on Israel to allow the IAEA to supervise its nuclear program and to ban the use of nuclear weapons in the Middle East. Tzipi Livni, head of the HaTenua Party, then-foreign minister and now minister of justice, described the decision as “a resounding Israeli failure which has become a serious security problem.” Pointing a finger at Netanyahu, Livni added, “Anyone who fails to enlist the world to Israel’s side cannot lead Israel.”

The sharp criticism referred to the stalled diplomatic process with the Palestinians, which made it difficult for Israel to get any discounts on the international market. It is doubtful that from her current seat at the cabinet table of Netanyahu’s right-wing government Livni will manage to enlist the new “world,” in which Russia is playing a central role in the Middle East, for the perpetuation of the ongoing Israeli occupation and the nuclear imbalance in the Middle East.

According to minutes quoted in 1973: The Road to War, by Yigal Kipnis (Dvir Books), a week before the Yom Kippur War (Sept. 28, 1973), Soviet Foreign Minister Andrei Gromyko told President Richard Nixon and Secretary of State Henry Kissinger at the White House, “We will not be able to prevent the day when we all wake up and find a true conflagration in the region.” Gromyko asked his hosts, “Is the risk worthwhile?” and then answered himself: “Efforts must be made to find a solution, because a solution will not just drop down from the sky.”

The solution offered then by the Soviet Union is still valid today: peace and security arrangements for Israel, in return for Israeli withdrawal from the territories captured in the 1967 war and the demilitarization of the Middle East from weapons of mass destruction. The alternative to the solution was and remains “a true conflagration in the region.”