On the 20th anniversary of Oslo, there are no celebrations. 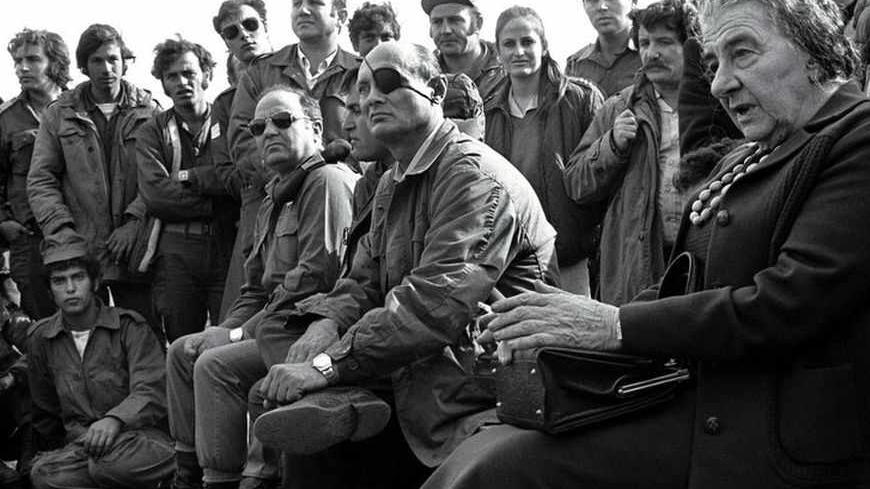 Prime Minister Golda Meir, accompanied by Defense Minister Moshe Dayan, meets with Israeli soldiers at a base on the Golan Heights after intense fighting during the 1973 Yom Kippur War. - REUTERS

Twenty years after the signing of the Oslo Accords on Sept. 13, 1993, at the White House, there is not even a small square or a side alley to be found in Israel bearing the name of the agreement. Few, if any, see fit to celebrate, or just to mark, the anniversary of the Oslo Accords. Palestinian terrorism and the Israeli right wing have since managed to turn the photo of Israeli Prime Minister Yitzhak Rabin and Palestine Liberation Organization Chairman Yasser Arafat on the White House lawn into a contemptible memory. This deeply significant event that saw Arafat accept Israel as a legitimate state competes with the Yom Kippur War for a top spot on the list of the country’s greatest national failures.

Gideon Avital-Epstein, in his new book, 1973 – The Battle for Memory (Schocken Books), writes that “anyone who was here in the Yom Kippur War remembers where he was and what he was doing, but there are no streets in the cities named after the Yom Kippur War or the [battle of] the Chinese Farm, as there are after the 1967 Six Day War.” On Yom Kippur 2013 as well, 40 years after the war, it appears that the scar has yet to heal, not just for the thousands of soldiers who watched their friends die in battle, but also in the national psyche. The Yom Kippur War resulted in a collective trauma.

"Yom Kippur" as a term has become synonymous with the failure and malfeasance that ended in a disgraceful defeat. When a senior personality is cleared of wrongdoing in court, the prosecution’s comeuppance is called a “Yom Kippur.” The tragedy of the 2010 Carmel Mountain fires has been dubbed the “Yom Kippur of the fire brigades.” Even a shameful loss by a football champions league team to an inferior club, a hint of the image of the [defeated] Egyptian army, is headlined on sports pages as the “Yom Kippur of Israeli football.”

Nonetheless, there is a difference between national sentiments toward the 1973 October War and the September 1993 accords. Whereas the Yom Kippur War was perceived as a defining step on the way to the peace agreement with Egypt, the Oslo Accords were considered, at best, as a diplomatic move resulting in a dead end, and at worst, [an example of] disastrous feeblemindedness on the part of the country’s political leadership.

A series of testimonials and books published in recent years shows that a diplomatic failure was responsible for the deaths of 2,687 Israeli soldiers in the Yom Kippur War more so than any intelligence failure or flawed military perception. According to a number of sources, Golda Meir, Israel’s prime minister in the early 1970s, persistently rejected countless messages, almost pleas, on the part of Egyptian President Anwar Sadat to give the Sinai Peninsula back to Egypt in return for full peace with the largest and most important of the Arab states. In My Life, her autobiography, Meir claims, “We won the Yom Kippur War, and I am convinced that deep in their hearts, both the political and military leaders of Syria and Egypt know that once again they suffered defeat.”

Official documents from that period paint a somewhat different picture. Sadat knew from the very beginning, “deep in his heart” before the first Israeli soldier fell in the Sinai, that the Egyptian army insufficiently strong to overcome the Israeli military, but Meir’s intransigence convinced him that the only way to achieve a diplomatic agreement and get back the Sinai ran through the battlefield.

In 2003, three decades after the Yom Kippur War and one decade after the Oslo Accords, Defense Minister Shaul Mofaz said during a visit to the Israeli Gush Katif settlements in the Gaza Strip, “With our enemies, one probably cannot take short cuts. Egypt went for peace with Israel only after it was defeated in the Yom Kippur War. The same will happen with the Palestinians.” Mofaz, head of the Kadima Party and a former army chief of staff, has in recent years turned into an avowed supporter of a peace agreement with the Palestinians based on the two-state principle put forth by the Oslo Accords.

Shlomo Gur, a contemporary of Mofaz, draws a totally different line between the Yom Kippur War and the conflict with the Palestinians. Gur — who fought as an artillery officer, was awarded a medal of honor for saving wounded soldiers from a burning truck and was one of only four people privy to the secret negotiations in Oslo — learned the limits of Israel’s military might in October of 1973. Said Gur, “The trauma of ’73 shook off my euphoria over ’67.”

Gur, who in the 1990s was the right-hand man of Deputy Foreign Minister Yossi Beilin and subsequently second in command at the Israeli Embassy in Washington, said in an interview with Al-Monitor, “I understood that the days when we thought we could do anything we want, and that we would maintain the country with military might, were over. I understood that the defeat we suffered at the hands of the Egyptians on Yom Kippur stemmed from the failure of a cowardly leadership to recognize the opportunity to reach agreement with Sadat. Unfortunately, we had to sustain this blow in order to understand that there’s another side with which we have to reach an arrangement.”

Happily, he added, Yitzhak Rabin understood that Israel could not afford another missed opportunity like that of Yom Kippur. Gur is convinced that the Yom Kippur trauma was a central element in Rabin’s decision to reach an arrangement with the Palestinians.

Gur contends that it is no coincidence that “Oslo veterans,” such as himself and Uri Savir, then director-general of the Foreign Ministry, and Ron Pundak, who initiated the process, are also “veterans of Yom Kippur.”

“Before the Yom Kippur War, I was also enthralled by the concept espoused by Moshe Dayan — ‘better to have Sharm el-Sheikh without peace than peace without Sharm el-Sheikh [in the Sinai Peninsula],’ ” said Gur. “When the possibility of war was discussed, we said it would be the war of the seventh day —  that in one day we would complete the work of the Six-Day War. In all the training exercises we managed to push back the enemy within two hours and extricate the soldiers from besieged bunkers.”

Gur recalled that several months before the war he had taken part in large and impressive maneuvers: “When I got home, I told my father what great things we could do. Dad, who was a veteran of World War II, told me, ‘But you don’t know what Katyusha rockets can do.’ On Yom Kippur, I understood first-hand what he meant. Anyone who was in Sinai experienced that trauma. Such traumas grab you by the throat. You’re sure it’s the end and you promise yourself that if you get out alive, you’ll do everything possible to make peace with the enemy.”

When he received ammunition, uniforms and blankets, which were airlifted to Israel from the United States, Gur understood, too, that Israel could not prevail in war without US support. This support, he said, had a fixed price — an end to the occupation and to the settlements.

Although in the final reckoning, the Oslo Accords are not flawless, said Gur, today even Prime Minister Benjamin Netanyahu and the sane right wing understand that  to avoid war and loss of international support, there is no escaping the need to pay in territorial currency. On the 20th anniversary of the Oslo Accords, he suggests learning the right lessons from the Israeli-Egyptian arena of the past 40 years — an agreement based on interests is insulated against the assassination of leaders, changes of regime and regional upsets, and, of course, a responsible leadership does not need war to exhaust the prospects of peace.