Israeli Prime Minister Benjamin Netanyahu should look back to the peace agreement with Egypt, which proves that compromise strengthens Israel's borders and guarantees its security. 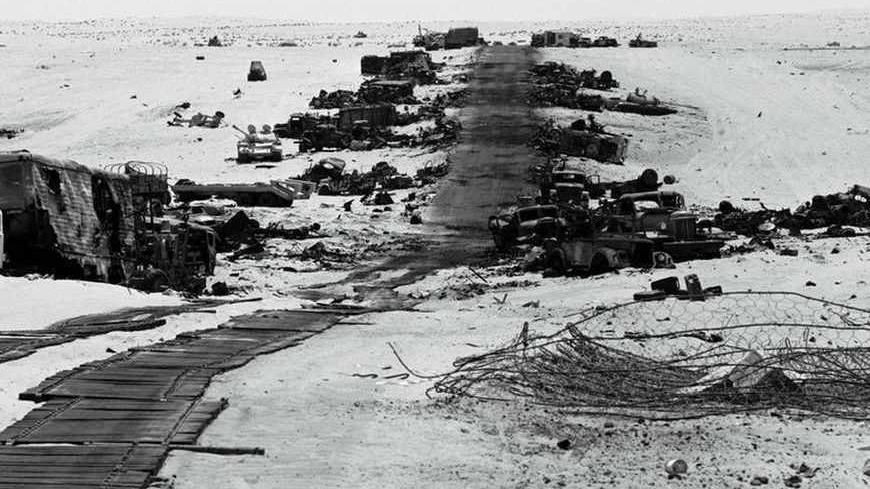 Destroyed Egyptian armor lines the sides of a Sinai road after it was hit by Israeli jet fighters during the 1967 Six Day War. - REUTERS

Several days ago I happened upon a yellowing Haaretz newspaper clipping from mid-August 1973, less than two months prior to the Yom Kippur War. It reported that Defense Minister Moshe Dayan had declared he was “giving top priority to the establishment of the town of Yamit in the Rafah salient (in northern Sinai), as he would to a top-rated defensive military line, to a front-line stronghold on the banks of the Suez Canal.”

The hero of the 1967 Six Day War explained that “the urban and agricultural settlement will constitute a partition between the Gaza Strip, with its 350,000 residents [who number more than 1.5 million today] and the Egyptian desert.” The senior politician attacked opponents of the Sinai settlement initiative within his Mapai (later to become Labor) party. “This whole show about Yamit is absurd,” lashed out the man who coined the saying “Sharm el-Sheikh without peace is better than peace without Sharm el-Sheikh,” a reference to the southern Sinai Peninsula town captured by Israel in 1967.

The majority in the government voted at the time in favor of Dayan’s plan and decided to allocate budgets for an infrastructure to house 250,000 inhabitants in the Yamit strip. President Shimon Peres, then serving as minister of transportation, promised to turn Yamit into a leading Mediterranean port city. At the height of that period, Egyptian President Anwar Sadat sent numerous messages to the government of Prime Minister Golda Meir regarding his desire for peace with Israel. Sadat warned that if Israel did not peacefully hand over the Sinai, Egypt would try to gain it back on the battlefield. Sadat was to recount in later years that the Israeli government’s decision to establish Yamit convinced him beyond a doubt that it was not willing to pay the price for peace with Egypt, and there was no alternative to war.

The Yom Kippur War, which took the lives of 2,650 Israeli soldiers, did not stop the funneling of funds to the Sinai settlements. It’s fair to assume that were it not for Sadat’s 1977 peace initiative, the settlements of Yamit, Neot Sinai and Ofira (the Hebrew name given to Sharm el-Sheikh) would have grown and flourished. Following the peace agreement with Egypt, reached after the traumatic October 1973 war, Israel was forced to evacuate 4,300 Israelis from their homes in 19 settlements in the Sinai Peninsula. For the sake of comparison, in those days, no more than 12,000 Israelis resided in West Bank settlements, less than 4% of their current population.

Imagine the Israeli military, today, having to divert its forces from Israel’s northern border and the West Bank to defend more than 100,000 Israeli settlers around the Sinai, or to uproot them from their homes at the cost of a political and social crisis, and paying billions of dollars for it. Without peace, who could have guaranteed that the chaos in Egypt would not have spilled over into the Gaza Strip and from there into the heart of Israel? What interest would the Egyptian army have had in preventing Hamas from raining rockets onto the central Israeli town of Rishon Letzion and repelling al-Qaeda cells in Sinai? What would have happened had Prime Minister Menachem Begin given a cold shoulder to Sadat, and US President Jimmy Carter had not insisted on shutting the two of them off at Camp David until they signed a peace treaty?

And now, please read the following quote from an interview by columnist Ari Shavit with the outgoing secretary of the Israeli cabinet, Zvi Hauser, published in the weekend edition of Haaretz [Aug.15]. Replace “Syrian President Bashar al-Assad” with “Anwar Sadat,” and the “Sinai Peninsula” and “Syria” with “Egypt”:

''In my time I still attended closed meetings in which our 'good boys' talked about Bashar Assad being a credible partner and how we could strike a deal with him and give him the Golan Heights and bring him all the way to Lake Kinneret. That was not 30 years ago, it was less than three years ago. But with the same speed that films change in the Gat movie theater, Syria changed, too. If we had given it the Golan Heights in 2010, in 2013 we would have had al-Qaeda in Kibbutz Ein Gev. But nothing. Silence. No one was wrong, no one recanted. With the exception of one article by you, none of the advocates of the baseless peace with Assad said, 'Oops, I was wrong.'”

Hauser complimented Shavit on an [August 2012] article in which he shared with his readers his reflections as he watched the reddening Golan Mountains at sunset. “Bit by bit, the pure enjoyment of the breathtaking beauty was replaced by a heavy discomfort,” Shavit waxed poetic. “I couldn’t help thinking what would have happened today had the ideological position which I espoused been accepted: peace in return for the Golan. … Had we gone to sleep a decade ago with Assad, we would have woken up this year with the Jihad. The Syrian Golan would have turned into a black hole far more dangerous than the black hole of the Sinai Desert.

“Sooner or later Israel would have been forced to once again capture [the Syrian strongholds at] Tel Faher and Nafah and continue on to [the town of] Quneitra. Except that this time, we would have paid the price with bursts of ballistic missiles on Tel Aviv. The peace in which I believed and which I recommended would have turned into an all-out war, in which thousands may have been killed.”

It’s a pity Shavit didn’t ask Hauser whether the downfall of the Mubarak regime and the rise to power of the Muslim Brotherhood caused him any compunction about the Israeli withdrawal from Sinai and the evacuation of Yamit. After all, it’s the same quarrelsome Middle East, the same Muslims and the same hatred of Israel. And perhaps the removal of former Egyptian President Mohammed Morsi from the Egyptian presidential palace and the military takeover of the country restored attorney Hauser’s faith in the Israeli peace deal with Egypt? Until the next Arab Spring. And what about Shavit himself? Is he having second thoughts about his sinful support for the peace treaty with Egypt (at the time as a central activist in the Peace Now movement)?

As foreign minister, Moshe Dayan made amends for the sin of Yamit committed by Defense Minister Dayan. Dayan was one of the forefathers of settling in the Sinai. He fought for it and considered it to be a first of its kind strategic and security advantage. But he learned to change his worldview and political path, adamantly supporting Begin’s decision to withdraw from all of the Sinai in return for peace.

Will Prime Minister Benjamin Netanyahu decide to follow in Begin’s footsteps, or will he adopt the concept of “Israel is a villa in the jungle” espoused by former Prime Minister Ehud Barak, who missed the opportunity to make peace with Syria? Will Palestinian President Abu Mazen go all the way in the wake of Sadat? Will President Barack Obama go the way of President Jimmy Carter? The answer to the riddles — in less than nine months.