The leadership change in Iran and the growing interest in the Arab Initiative present a new opportunity: nuclear demilitarization in exchange for comprehensive peace. 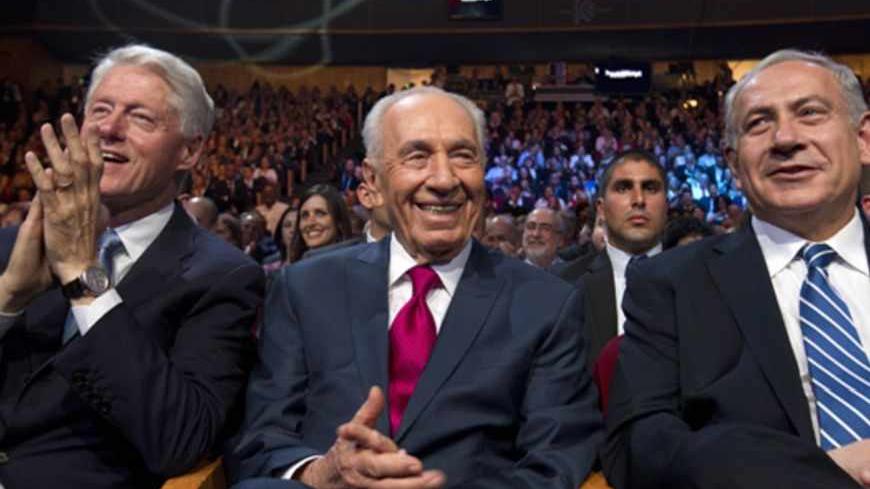 President Shimon Peres’ nonagenarian birthday celebrations on June 18 took me back some 20 years to my farewell talk with him. Having just finished a 10-year tour as the political correspondent of Israeli daily Haaretz, I was getting ready to leave for Washington as the newspaper’s desk chief in the United States. Back then, I asked the 70-year-old toddler Peres to sum up in one sentence what he considered to be the greatest achievement of his entire public career. Serving at the time as foreign minister in the late Prime Minister Yitzhak Rabin’s second government, Peres fired back in a flash: “My contribution is that Israel is strong enough to make peace.” I instantly understood that the first part of the sentence was alluding to Dimona, where — according to foreign sources, of course — Peres had initiated the establishment of Israel’s nuclear reactor. It was only two weeks later, on Sept. 13, 1993, that I understood the second part of that sentence — making peace — as I watched him and Rabin shake hands with Palestine Liberation Organization leader Yasser Arafat on the White House lawn.

As noted, 20 years have gone by since that meeting. Today, it seems that both notions — namely “Israeli strength” and “making peace” — are not what they used to be. The Iranian nuclear program is poised to chip away at what is called Israel’s “qualitative edge,” thus compromising its security. The status of peace isn’t heartwarming either. Notwithstanding, the replacement of Iranian President Mahmoud Ahmadinejad with President-elect Hassan Rouhani, and the growing interest in the Arab peace initiative open a window of opportunity for a new paradigm: Nuclear demilitarization in exchange for a comprehensive peace. Put differently, the old threat will be traded for new hope.

In June 2006, Flynt Leverett, who served as a senior director for Middle East affairs on the National Security Council during the early years of the President Bush administration, disclosed that on at least two occasions the United States had ignored Tehran’s reconciliation overtures. Addressing the Council on Foreign Relations in New York, Leverett related that in the spring of 2003, shortly after the US invasion of Iraq, the Swiss ambassador to Iran relayed to the White House an Iranian proposal to start a dialog with the administration on the nuclear issue. In the same breath, Tehran also proposed to discontinue its support of terrorism outside the occupied Palestinian territories and even embrace the principles of the Arab League’s peace initiative. (Iran abstained in the vote on the initiative that took place at the meeting of the Organization of Islamic Cooperation in 2003).

A few weeks prior to Leverett’s disclosure, Rouhani — who at the time served as Iran's Supreme Leader Ayatollah Ali Khamenei’s representative in the Supreme National Security Council and prior to that as Iran’s representative to the nuclear talks with the West — had made a far-reaching proposal for an International Atomic Energy Agency oversight of his country’s nuclear installations. In an article published in Time magazine (May 2006), he warned of a Middle Eastern nuclear arms race, pointing out the United States’ “double standard,” hinting at its longstanding support of Israel’s refusal to sign the Non-Proliferation Treaty.

On June 18, the Knesset held its first-ever debate on the perils of nuclear weapons. Prior to that, the sponsors of that debate — the leaders of Israel’s anti-nuclear movement and their guest, Nobel Peace Prize laureate Dr. Ira Helfand — were made to present the thrust of their ideas to a “senior Israeli official” due to the apprehensions of merely having a discussion on nuclear weapons in the region. The organization’s chairman, former Knesset member Mossi Raz, told Al-Monitor in this context that “nuclear disarmament movements operate throughout most countries in the world, whereas in Israel, we are forced to use the turn of phrase ‘according to foreign sources’ whenever the topic comes up for public discussion.” Raz observes that the rules of the game have changed and that the neighboring countries contend that if Israel is allowed to have nuclear weapons, so can they. “If nuclear arms in Israeli hands are a dangerous thing,” Raz concludes, “then it is far more dangerous when they are in the hands of those other countries.”

Since the mid-1980s the official Israel has espoused the idea that a regional nuclear arms disarmament treaty would be possible only in return for a comprehensive regional peace (including Iran). It was not long ago that Peres told me that the idea was still in effect. Addressing the World Economic Forum in May on the Jordanian side of the Dead Sea, Peres spoke highly of a regional peace model, which is the flip side of a nuclear demilitarization of the Middle East. Not far from there, in the Jordanian capital Amman, representatives of civil society from Israel, Saudi Arabia, Egypt, Lebanon, Jordan, Palestine and even from the Syrian opposition got together for a meeting that was attended also by UN and EU officials, as well as experts from the United States, Russia and Japan. They discussed joint ways of promoting the Arab initiative. The participants — Arabs and Israelis alike — are members of the “regional network for the promotion of the Arab peace initiative.” A vast Middle Eastern network of experts in the areas of government, diplomacy and academia, it has been working for a number of years to promote the Arab Initiative.

At the end of the conference, the participants sent a letter to Prime Minister Benjamin Netanyahu in which they requested that he discuss with US Secretary of State John Kerry the promotion of the regional initiative. “For the last 11 years, the Arab peace initiative has been sitting on the doorstep of Israel’s governments. The key to advancing this historic move is in your hands,” they wrote.

During Peres’ 90th birthday party, former President Bill Clinton said the following: “Israel needs to prepare for the worst. But if all you do is prepare for the worst and you don’t work for the best then there is no possibility of ever seeing the triumph of creative cooperation.” Did Netanyahu, who sat just two seats away from the former US president, get the message? Will Netanyahu have the wisdom of taking advantage of the change in Iran in order to plant the seeds of peace? And following US President Barack Obama’s renewed effort in his apropos speech in Berlin on June 19 to promote global nuclear weapons reduction, will the Israeli premier try to supplant transient “qualitative edge” for more long term and qualitative advantages which a regional peace can yield?