Hassan Rouhani, Iran’s new president, says his first visit to the United States exceeded his expectations, but he leaves many who met him puzzled about what he is really prepared to do. 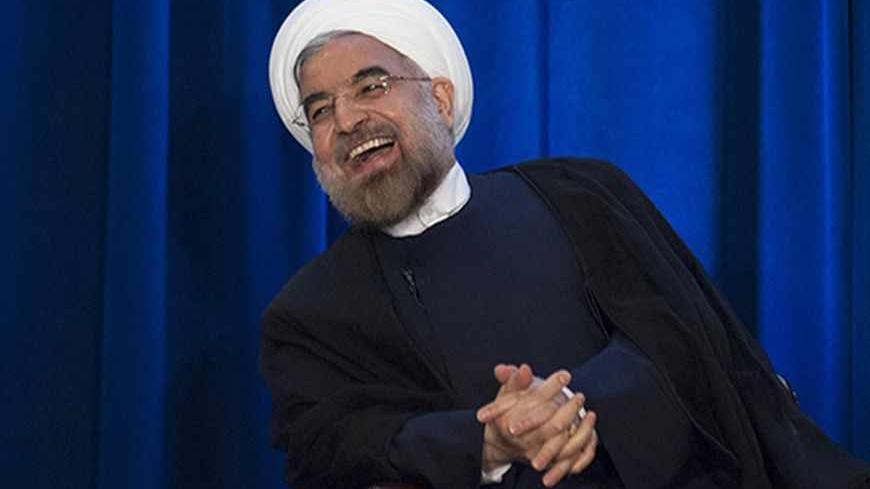 Iran's President Hassan Rouhani laughs as he speaks during an event hosted by the Council on Foreign Relations and the Asia Society in New York, Sept. 26, 2013. - REUTERS/Keith Bedford

NEW YORK – It was a week capped by an unprecedented phone call between the US and Iranian presidents, yet in the end, Iran’s Hassan Rouhani gave little indication of exactly what he would do to ease the long and bitter dispute between the two countries.

The Iranian President did make a far more positive impression than his predecessor and showed how he has managed to survive and even thrive in more than three decades at the helm of politics in the Islamic Republic.

In a series of speeches and gatherings over the course of this week, the 64-year-old cleric — who said before he left Tehran that he was coming to New York to present the “true face” of Iran — made a careful and considered debut, seeking to expunge the unpleasant memory of his predecessor, Mahmoud Ahmadinejad.

Rouhani tailored his messages to varying audiences without clarifying exactly how Iran would demonstrate what he repeatedly described as its desire for “constructive engagement” with the world.

During a press conference on Sept. 27, on his last day in New York, he said Iran would present a plan at the next round of nuclear negotiations — scheduled to take place in Geneva on Oct. 15-16 — but provided no details. He slid around many other questions including the fate of Syrian President Bashar al-Assad, and he only showed real vehemence when Margaret Warner of PBS asked if Iran could be trusted to keep its promises that its nuclear program would be purely peaceful.

In his speech to the UN General Assembly on Sept. 24, Rouhani protected his flank against domestic hard-liners by bemoaning efforts by unnamed nations to divide the world into a “superior us and inferior others,” to oppress the Palestinians and kill “innocent civilians” with drones. After a meandering start, however, the speech pivoted to promising that Iran would “act responsibly” and “seek to resolve problems, not create them.”

On Sept. 25, he addressed media executives in the morning and former US officials and proliferation experts in the evening — the latter a group of about 40 that included former National Security Adviser Brent Scowcroft, former nuclear negotiators Robert Einhorn and Gary Samore and former Ambassadors Bill Luers, Frank Wisner and William Miller.

“He’s a serious fellow and demonstrated tremendous self-confidence,” Gary Sick, a White House National Security Council staffer during the 1979-81 hostage crisis, told Al-Monitor. Yet, Sick said that when he pressed Rouhani at the Sept. 25 dinner on whether Iran was ready to try again for a “grand bargain” similar to a proposal made in 2003 that the United States rebuffed, Rouhani answered, “‘We need to take this a step at a time,’ not in one leap,” Sick said.

On the morning of Sept. 26, Rouhani told a UN meeting on disarmament that Iran wanted a world without nuclear weapons and that Israel — which is believed to have at least 100 nuclear weapons — should join the Nuclear Non-Proliferation Treaty as Iran did under the shah. Since Israel does not admit it has nuclear weapons, that appears to be quite a stretch.

At night, Rouhani massaged an audience of about 300 — think tankers with a sprinkling of journalists and a few unusual guests of the Iranian mission to the UN including sports promoter Don King. Rouhani began by saying that he was addressing the group as a “colleague,” because prior to becoming president, he headed the Center for Strategic Research, a government-affiliated think tank.

But his comments were mostly platitudes about avoiding a “lose-lose approach” to world problems, asserting Iran’s right to play “a major role at the global level,” and focusing on the future, or as he put it, turning the “turbulent past into a beacon lighting the path forward.”

Asked by Al-Monitor if he would permit the United States to open an interests section in Tehran to process visas for Iranians, he talked instead about the importance of encouraging more academic and other exchanges with the United States. “Initial steps would have to be taken by the people,” he said, without explaining how that could be facilitated.

On the Holocaust — an issue that came up in almost every meeting with Americans Rouhani held this week — he said that Iran condemned “the crimes by the Nazis in World War II.” He added, “Many people were killed including a group of Jewish people.” One might argue that 6 million people are hardly just a “group,” but Rouhani had already gone about as far as he apparently felt he could in trying to overcome memories of Ahmadinejad’s chronic Holocaust denial without upsetting his right flank at home.

Asked if Iran would support a two-state solution for Israel and Palestine, Rouhani repeated a formula first introduced by former reformist President Mohammad Khatami, by saying, “Whatever the people of Palestine accept, we shall accept as well.” But he did not give details, so it was not clear whether by “people of Palestine,” he also meant millions of Palestinian refugees living outside the West Bank and Gaza — a non-starter for Israel.

Ziad Asali, president of the American Task Force on Palestine, tweeted, "Elastic and familiar. Lacking in belligerence. It will do."

The highlight of the evening came at the end when Rouhani’s foreign minister, Mohammad Javad Zarif, arrived fresh from a historic meeting with US Secretary of State John Kerry.

Richard Haass, president of the Council on Foreign Relations, which co-sponsored Thursday’s event, told Al-Monitor, “The lead [of the story] is the P5+1,” referring to the five permanent members of the UN Security Council plus Germany, which had just concluded the meeting at which Zarif and Kerry met. Of Rouhani, Haass said, “He’s cerebral, he’s knowledgeable,” but his “answers are very careful, and he is being purposefully general, even vague.”

Indeed, Rouhani exhibited the same caution in his first presidential news conference in Tehran and again on Sept. 27, where he listed all the presidents, prime ministers and foreign ministers he had met and said "our success was greater than our expectations."

A number of observers expressed disappointment with Rouhani’s UN speech and with his failure — after much anticipation — to chat with US President Barack Obama in person, or at least shake his hand when both presidents were at the UN on Sept. 24.

“Everyone expected more from the Iranian president yesterday,” Iraqi Foreign Minister Hoshyar Zebari said on the evening of Sept. 26 to an audience at the Council on Foreign Relations. “They should have capitalized on this sea of goodwill and the positive statement President Obama made” earlier in the day to the UN General Assembly.

A former senior US official, who spoke to Al-Monitor on condition of anonymity, said his impressions of the new Iranian president were favorable but that he was also “slightly disappointed in his [Rouhani’s] message. He seemed to be back to earlier Iranian complaints that the international community has no right to tell us what we can do.”

Still, it is Rouhani’s caution — along his long resume and closeness to Supreme Leader Ayatollah Khamenei — that may give him the chance to accomplish what his predecessors could not.

“I like him,” said Middle East scholar Shireen Hunter, an expert on Iranian foreign policy. “His personality is very conciliatory. In some ways, he is better than Khatami. He has a lot of self-confidence but a moderate ego, which is very much required if he wants to navigate Iranian politics. He’s no pushover, but he has this way of diffusing things.”