With the nuclear crisis still unresolved, Iranian President Hassan Rouhani is likely to emphasize Iran’s opposition to the Islamic State. 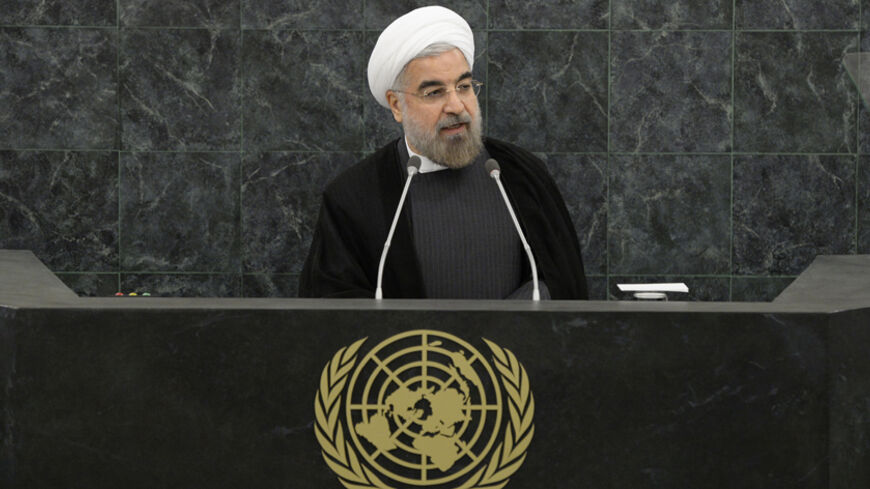 NEW YORK — When Iranian President Hassan Rouhani came to New York last year for his debut at the UN General Assembly, there was optimism that a fundamental shift between the United States and Iran was at hand.

Rouhani seemed the ideal interlocutor for the administration of President Barack Obama because of his stature as a pragmatic pillar of the Iranian regime, strong showing in presidential elections and record of diplomatic achievement when he was a top nuclear negotiator a decade ago.

But as Rouhani returns to the annual gabfest on the East River, it is no longer sufficient for him to be the anti-Mahmoud Ahmadinejad. While Iran is certainly in a better position now than it was under Rouhani’s dysfunctional predecessor, the Iranian leader has yet to achieve a long-term nuclear agreement that would definitely ease international economic sanctions against Iran and permit its full integration into a still heavily US-influenced global power structure.

Indeed, uncertainty about the nuclear talks led to speculation that Rouhani might skip this year’s summit. Rouhani had also indicated that he did not want to follow the example of Ahmadinejad, who never missed a General Assembly during eight years in office even though he had little to show for his erratic and often self-defeating diplomacy. In the end, however, Rouhani is channeling Ahmadinejad by planning a frenetic schedule of media and other appearances — in addition to an expected speech before the General Assembly on Sept. 25.

Rouhani is to begin with a breakfast with top US editors and correspondents Sept. 23, have an off-record dinner with Iran scholars that evening, joust before a live and Internet audience with Fareed Zakaria in a hotel ballroom the following afternoon and hobnob with members of the faith community at the Cathedral of St. John the Divine on Sept. 26. A dinner with Iranian-Americans is also planned. But unlike last year, Iranian authorities have dampened speculation about a meeting between Obama and Rouhani. A mere phone call between the two last year stirred up hard-line political forces in Iran that have only gotten stronger in recent months. Since Obama is to speak a day earlier than Rouhani at the General Assembly, there is little chance of an “accidental” encounter in a UN corridor.

Another way in which the visit will be more reminiscent of Ahmadinejad’s annual sojourns in New York is that this year, Rouhani is likely to encounter considerable criticism about Iran’s domestic policies — particularly its human rights record. This is especially so if Iranian authorities fail to free Washington Post correspondent Jason Rezaian and his wife before Rouhani lands in the United States.

Rouhani “is likely to have a harder time with the press than he experienced last year, when he arrived as the newly elected president, promising sweeping reform,” Haleh Esfandiari, director of the Middle East program at the Woodrow Wilson International Center for Scholars, told Al-Monitor. “If Rezaian is not released by the time of Rouhani’s arrival,” Esfandiari added, “that may reflect Rouhani’s inability to rein in Iran’s security agencies and its judiciary.”

Detained after covering the last multinational round of nuclear talks in July, Rezaian, an Iranian-American, and his Iranian wife have yet to be formally charged with any crime and their detention has been widely seen as an effort by Iranian hard-liners to embarrass Rouhani, who does not control the judiciary or security services. Iran also faces criticism for its widespread use of capital punishment, discrimination against religious minorities, repression of the press and attempts to censor the Internet.

In other areas more under his purview, Rouhani has performed better. The modest sanctions relief allowed by last year’s interim nuclear agreement and more competent economic management have lifted Iran out of recession after nine straight quarters of negative growth. Some sectors, such as the automotive industry, have experienced significant improvement and Iran has also increased sales of petrochemicals as well as oil. But unemployment remains high and most of the foreign businessmen flocking to Tehran in recent months have refused to sign — as opposed to explore — contracts until the nuclear dispute is definitely settled.

It remains unclear to what extent Iranian Supreme Leader Ayatollah Ali Khamenei will allow Iranian negotiators to compromise on key issues such as the size of Iran’s uranium-enrichment program and the duration of any restrictions. Foreign Minister Mohammad Javad Zarif, appearing Sept. 17 at the Council of Foreign Relations in New York, said Iran is “committed to resolving this issue,” but suggested that it would not reduce the number of centrifuges currently operating — about 10,000 — or accept a deal that caps these numbers for more than five years.

With a nuclear deal unlikely over the next two weeks, Rouhani and Zarif are likely to engage other UN members about the growing threat of the self-styled Islamic State (IS) and stress Iran's opposition to this terrorist entity. Khamenei has rejected reported US overtures to Iran for closer cooperation, but the United States and Iran have coordinated military moves in Iraq indirectly through Iraqi officials and Kurds.

Richard Haass, president of the Council on Foreign Relations, told Al-Monitor that the United States “should continue to pursue a nuclear deal it can live with at the same time it explores the potential for cooperation with Iran — however limited or tacit — in Iraq, Syria and Afghanistan. It is not a matter of leverage or tradeoffs, but rather whether the two governments can work together or in parallel where their interests overlap at the same time they continue to disagree or work against one another.”

Gary Sick, another veteran Iran observer who dealt with the Iranians during the 1981 hostage crisis, said the rise of IS as well as the frequent nuclear talks have softened US hostility toward Iran.

Over the past year of high-level negotiations over the nuclear issue, “people have gotten used to the idea that we can talk to them,” Sick told Al-Monitor. “In fact, we’re actually fighting on the same side in Iraq.”

As for Rouhani, Sick said he does not anticipate the same “excitement” that greeted the newly inaugurated president last year. The mood now is “much more sober,” Sick said, but in some ways “more normal … People are less shocked that we can deal with Iran and find common ground. At least on that level, we’ve made some progress.”

by Murielle KASPRZAK and Joseph SCHMID | AFP | May 26, 2022
END_OF_DOCUMENT_TOKEN_TO_BE_REPLACED