Obama, Rouhani Stress Diplomacy But Do Not Meet

The presidents of the US and Iran suggest they can resolve their differences peacefully in dueling speeches at the UN General Assembly. 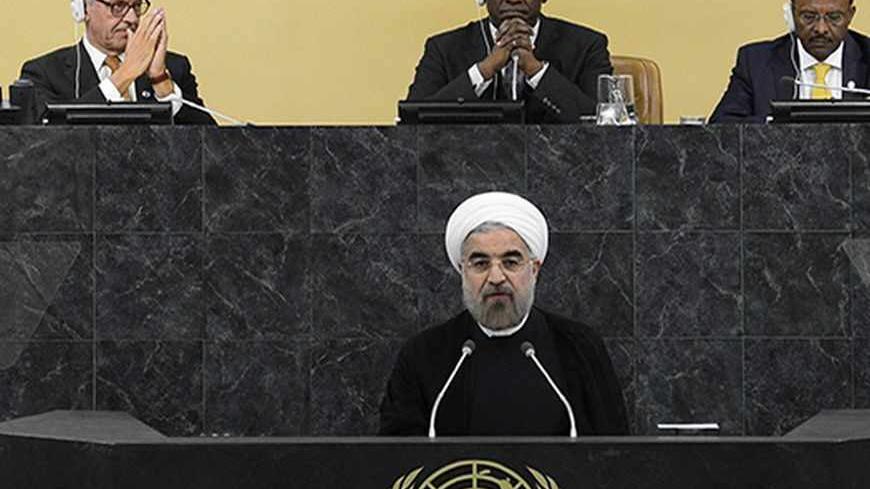 The presidents of the United States and Iran traded relatively conciliatory speeches on Tuesday [Sept. 24] that included the most forthcoming remarks ever by a US president toward the Islamic Republic of Iran — among them, an explicit renunciation of “regime change.”

But Barack Obama and Hassan Rouhani did not “bump” into each other in the corridors of the United Nations or at a heads of state luncheon, disappointing those who sought a more tangible sign of high-level US-Iran rapprochement.

Still the two leaders’ comments before the annual summit of the UN General Assembly mirrored each other in their emphasis on a diplomatic solution to the nuclear and other disputes that have divided the US and Iran for 34 years. Indeed, Obama listed Iran’s nuclear program as his number one diplomatic priority for the remainder of his term, followed by progress on the Arab-Israeli dispute. The US president also said that Secretary of State John Kerry would be in charge of the Iranian nuclear file — elevating the talks to the same level as Rouhani had, who earlier designated Foreign Minister Mohammad Javad Zarif as Iran’s official in charge.

A better gauge of US-Iran progress will come Thursday [Sept. 26] when Kerry and Zarif both attend a session of the so-called P5+1 — the five permanent members of the UN Security Council plus Germany — to discuss how to move beyond the stalemate in nuclear talks. A full-fledged new round is expected in October in Geneva.

Meanwhile Rouhani, who said before his arrival in New York that he intended to show Iran’s “true face” to the world after eight years of Mahmoud Ahmadinejad’s shenanigans, told the General Assembly that he had “listened carefully” to Obama’s remarks and that if the US government “will refrain from following the shortsighted interests of warmongers and pressure groups, we can arrive at a framework to manage our differences” based on “equal footing, mutual respect and recognizing principles of international law.”

On the nuclear issue, Rouhani said it could be resolved by accepting two principles: that Iran’s nuclear program would remain peaceful and that the rest of the world would accept uranium enrichment on Iranian soil. It remains unclear whether the US will accept the latter, although Obama, in his speech, said "We respect the right of the Iranian people to access peaceful nuclear energy."

No senior American official was spotted in the hall while Rouhani spoke. Zarif and a deputy Iranian foreign minister attended Obama’s address hours earlier. Kerry and US Ambassador to the UN Samantha Power were meeting at the time of Rouhani's address with Russian Foreign Minister Sergey Lavrov.

Rouhani began the speech with a stem-winder that in vehemence recalled Ahmadinejad’s rants, forcefully denouncing the recourse to war and sanctions which Rouhani said hurt ordinary Iranians far more than the state or the political elite. He also spoke out against what he called “institutionalized aggression against innocent Palestinian people.”

But he never mentioned Israel by name — avoiding the conundrum of whether to call it the “Zionist entity” as has been official Iranian practice since the 1979 revolution. (No Israeli diplomats attended the speech anyway.) And unlike Ahmadinejad, Rouhani did not rail against the unfairness of the UN system which gives veto power to only five nations: the US, Russia, China, France and Britain.

In places, Rouhani echoed Obama. Referring to Syria, Rouhani said that there was “no military solution to the Syrian crisis.” He said the goal should be the “quick end to the killing of innocents and that Iran welcomed Syrian acceptance of the chemical weapons convention.

While Rouhani complained about the interference of others in Syria, he was mum about Iran’s own support for the regime of Bashar al-Assad. Rouhani pledged, however, that Iran would “act responsibly” in the region and seek to resolve problems “bilaterally as well as multilaterally.”

There was no immediate US reaction to Rouhani’s comments.

An Iranian academic, who spoke on condition of anonymity, told Al-Monitor that the Obama speech was balanced and should meet with Tehran’s approval.

Obama broke new ground by becoming the first US president to explicitly forswear regime change as the US goal when it comes to the Islamic Republic and to acknowledge that the US had a “role in overthrowing an Iranian government during the Cold War” — a reference to the CIA’s involvement in the 1953 coup that removed Prime Minister Mohammad Mossadegh and put Shah Mohammad Reza Pahlavi back on the throne.

In 2000, then-Secretary of State Madeleine Albright apologized for US participation in the coup and also expressed regret that the United States backed Saddam Hussein in the 1980-88 Iran-Iraq war.

Obama did not go as far but mentioned “Iranians poisoned in the many tens of thousands” in discussing the need for a tough UN resolution on Syria and its use of chemical weapons against civilians.

In the past, the United States has refused Iranian participation in a Geneva II conference to form a transitional government for Syria but Rouhani and other Iranian officials have suggested several times in recent weeks that they would be prepared to see an alternative to Assad.

In an interview with the PBS Newshour on Aug. 28, Obama said he would work with “anybody” to stop the fighting, which has killed more than 100,000 people. On Tuesday, Obama went further in suggesting that Iran could be part of the solution to Syria’s civil war instead of one of many countries fueling the carnage.

“The notion that Syria can return to a prewar status quo is a fantasy,” he said. “It’s time for Russia and Iran to realize that insisting on Assad’s rule will lead directly to the outcome they fear: an increasingly violent space for extremists to operate.”

A senior member of the Iraqi delegation to the UN General Assembly, who spoke on condition that he not be named, told Al-Monitor that Obama’s speech “was a reconciliatory speech toward Iran that had many messages of assurances.” He listed Obama’s remarks that “Iran can have a peaceful nuclear program” provided it meets its obligations for transparency and that the US “is not after regime change.”

Joe Cirincione, president of the Ploughshares Fund, which seeks nuclear disarmament, said, “At first I thought the speech was tired and lacked content. But then Obama warmed up and by the time he got to Iran, he was quite specific.”

Many in Congress are likely to be less impressed.

Rep. Eliot Engel, the ranking Democrat on the House Foreign Affairs Committee, said Rouhani “missed an opportunity ... to set a new constructive tone demonstrating Iranian seriousness in addressing its nuclear program. Far from engaging in a ‘charm offensive,’ he repeated too many of the same old talking points blaming the United States and our allies for all of the world’s ills.”

While Obama acknowledged Iranian grievances, he also underlined American ones, noting that most “Americans see an Iranian government that has declared the United States an enemy, and directly — or through proxies — taken Americans hostage, killed US troops and civilians, and threatened our ally Israel with destruction.”

Obama added: “I don’t believe this difficult history can be overcome overnight — the suspicion runs too deep. But I do believe that if we can resolve the issue of Iran’s nuclear program, that can serve as a major step down a long road towards a different relationship — one based on mutual interests and mutual respect.”